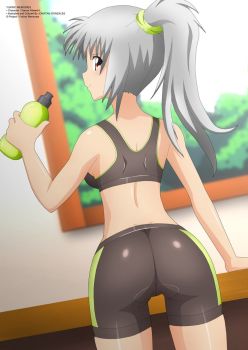 Kana would be in the locker room. She had just gotten done doing a hardcore work out. Lots of cardio, light weights, even some yoga. She was just getting ready for her second half of her work out which happened to be at the pool. Kana would strip out of her spandex shorts and sports bra and slip into a cute little skin tight grey and green one-piece swimsuit. Her body was glimmering with sweat from her previous work out so she decided to step into the shower before she made her way to the pool.

When Kana got there, She would walk around the pool before dipping her toe in to check the temperature. It was perfect. She would than make her way over to the stairs and slowly walk in. She would begin doing laps of all the different strokes she knew. 5 laps for every stroke.

Once she was done, She would look up at the clock and realize she still had a good hour of her rental time for the pool. She would look around before laying on her back in the water. She would float peacefully on her back and shut her eyes before slowly falling asleep. Her small fit body looking extra tight as the only things poking out of the water was her face and her perky cute boobs. Hopefully nobody would come in... 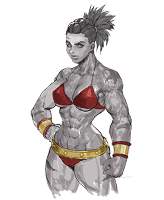 Zarya Volkov was nothing if not obsessive about her physical appearance. The woman practically lived in the gym and seemed to enjoy bodybuilding almost as much as getting paid to beat girls up in the wrestling ring. In a sense, her routine had shadowed Kana's that day, beginning with a vigorous workout, focused on power lifting, with plans to pay a visit to the pool to swim a lap, or several. Recent events had impressed on Zarya the need to work on her cardio. Thankfully, she'd already reserved her pool time. She *hated* not having the place to herself.

Peeling out of her spandex leggings and sports bra to reveal a body worthy of a war goddess, Zarya took a quick shower before stepping into a dark red swimsuit that clung to every curve like a second skin. It was high cut at the thighs and low in the front, revealing the sort of generous cleavage women of Zarya's muscular rarely possessed. It said something about her own extreme vanity to wear such a outfit when she didn't expect anyone to see it. She made her way to the pool area...

...and found it occupied.

A girl was floating blissfully on the water without a care in the world. Zarya didn't recognize her, but that didn't matter. It wouldn't have dampened the Russians anger one bit as her fingers curled into tight fists.

A more reasonable person would have immediately realized that their must have been some mistake, maybe even offered to share the pool as a compromise. The woman known by her opponents as the Iron Soldier, however, decided to take Kana's presence as a personal affront.

Backing away from the edge to get a running start, Zarya rushed forward and leaped into the pool, looking to give Kana a rude awakening in the form of a massive cross-body splash across the sleeping girl!
_________________
Want to role-play or set up a match? PM me and let me know!
Wrestlers - The Barracks 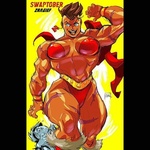 Kana was sleeping like a baby. Its was the best sleep she had gotten in a long time. She lost sleep due to stress about her wrestling career even if she didn't show it. She would be at complete blissful rest. A rest that was about to be brutally disrupted.

Kana would hear the feet pattering sound against the wet tile floor. One eye would open and see a much bigger and bustier girl than her. She was big and busty but at the same time, she had amazing abs and a body of a war goddess. Kana couldn't help but blush when she saw the beautiful bikini this woman was wearing.

When kana saw her future abuser looking furiously as her, She would foolishly take no threats as she stuck her tongue out to cutely taunt the sexy giant. Her eyes would be closed again and she would be at rest again until she felt a hard smack against her wet stomach as all the air was forced out of her, her face puffing up cutely. She would sink under the water filling her lungs with water as her eyes widened. Her eyes would be open to a blurry blurry vision of a woman but other than that, she was she was completely confused about what was going on. She would try and swim to the nearest latter but she was very slow due to her just recent brutal splash.

It was beyond satisfying, the impact of belly against belly as Zarya landed crosswise atop Kana, especially after the little brat had *dared* to taunt her. The resulting splash was dramatic, water reaching all the way to the edge of the pool where it soaked the floor. The amazon grabbed for Kana, but that was easier said then done underwater. The smaller girl managed to reach the surface, making slow but desperate progress towards the edge of the pool.

Once Zarya had her bearings, the Russian was right after her prey, surging out of the water behind Kana! She reached for Kana's hair and, if she managed a solid grip, would move to yank the smaller wrestler back towards her, looking to haul Kana over her shoulders in a torture rack position, stretched across the Iron Soldiers muscular shoulders and staring up at the ceiling.
_________________
Want to role-play or set up a match? PM me and let me know!
Wrestlers - The Barracks

Kana would be coughing as she reached the latter and almost escaped the violent hard body she had just met. Unfortunately, her hair was grabbed and she was yanked back towards the muscle girl. "Oh no please! What are you doing??? GAHHH!" Kana would yell out in pain as she was stretched across a very strong pair of shoulders.

Kana would continue to cough up water and begin shaking and squirming trying her best attempt to escape. "Ahh! What... what do you want??!" Kana would ask as she was forced to look up at the curling and felt her back stretching painfully. "Ple... Please le.. let me go!" Kana would beg her captor.
_________________
Shanecawfs heels and jobbers of your dreams

Zarya hefted the much smaller Kana across her shoulders with ease, holding her victim in place with one hand around Kana's left thigh and the other at her chin.

"This is *my* time to use the pool. I think you should apologize for this inconvenience. " She demanded, her icly calm tone and harsh accent adding another layer of menace. She didn't even give Kana a chance to respond before dipping beneath the water and dragging the girl under with her!

Zarya held her breath to the count of thirty before rising up again, giving herself and Kana, still stretched across her shoulders, a chance for fresh air.

"I'm sor! Gluh!!!" Is all kana would have time to say before she was dunked under the water unexpectedly. She would try to breath but her lungs only filled with water. She was also still being stretched over the muscular shoulders on her captor.

She was held under the water for what felt like a life time when really it was only 30 seconds. She was completely helpless. She would gasp for air as she arose from the water. Her little body gleaming in the light. "I don't, COUGH* COUGH• understand! I rented out the pool for this afternoon! We can share it or I'd be very happy to reschedule my pool time!" She would try to bargain with the strong woman. She would begin having a coughing attack as her lungs were still trying to get the water out of her body.
_________________
Shanecawfs heels and jobbers of your dreams

"Did I ask for excuses?" Zarya asked, plainly, with a tone that should have frozen the pool solid. "No... I did not. I asked for an apology. I was polite and everything."

The Russian amazon pulled down with her grip on Kana's chin and thigh both, as if trying to snap the smaller girl in half across her powerful shoulders! She only maintained the pressure for some ten seconds before easing up on the pressure, though it likely felt far longer. Regardless, Zarya intended to made it clear Kana was nowhere near her match in a fight.

"AHHH!!!" Kana would scream as she was almost snapped like a twig. Her arms and legs flailing and her eyes widening starting to tear up. "It... UGH... not my f.. DAW... fault the stupid AFW couldn't get a schedule right!!!" She would say. Kana was a very sweet girl but she could be stubborn as hell which she was showing right now. "Please just let me go!!! We can share or I can leave!!!

Her back would feel as though it was going to be broken as she felt the 10 second increase of strength. "AH AH AHHHHH!!!!" Kana would squeal until the pressure was taken down. She would sigh in relief as the pressure shrunk but would still let out the occasional groan due to her painful position.
_________________
Shanecawfs heels and jobbers of your dreams

"That's not good enough!" Zarya raged, having had no intention of showing poor Kana mercy. The girls fate had been decided the moment the Russian amazon had stepped into the pool area and found it unacceptably occupied. Now she wasn't going to be satisfied until Kana had been properly punished for the crime of inconveniencing a War Goddess.

The hand at Kana's chin moved instead to grab her by the shoulder, fingers sinking painfully into her soft flesh. Likewise, Zarya's other hand released the girls thigh and cupped her about the crotch instead, the amazons palm against her backside and fingers curled around Kana's mound.

With a soft grunt, Zarya would lift the smaller wrestler overhead in a sort of reverse gorilla press, holding her aloft for almost a minute in a clear show of raw physical power before throwing her towards the center of the pool!
_________________
Want to role-play or set up a match? PM me and let me know!
Wrestlers - The Barracks