» Cage Match: Akiha Kosha vs Belinda Northman
by Serpon Today at 9:24 am

Fighting style: Speed! Nothing but Speed for Shibita! She will zoom around the ring, chipping away at her opponents defenses and jump off ropes every chance she gets. Her idea is to be just 5 steps ahead of her opponent to avoid getting hit at all. She generally tries get into her opponents head by doing fake outs and taunting/teasing them. This does tend to backfire on her tho and put her in some bad spots. The more Shibita get cornered, the more desperate she will become losing focus and just throwing everything she can at her opponent.

Cannonball: Shibita will climb to the top rope and hype up the crowd yelling “Cannonball!” Before jumping off and curling into a ball slamming her self into her opponent.

Hempen Halter: A running headbutt from the one of the 4 corners of the ring. Fairly nasty for her opponent... And her too. Mostly likely stunning both. A move she only uses when she’s desperate.

Dead Men Tell No Tales: Taking a dazed opponent she will drag them to one corner’s of the ring and leave just enough space for her to stop. From there she will climb up the corner on the opposite side of her opponent and perform a neck cutting motion. Before jumping off and soaring across the ring with a flying elbow drop. The jump must be perfectly calculated or Shibita might end up hurting herself more than the opponent.

Physical stats (From highest to lowest)

Speed: ★★★★★
Shibita’s speed is through the roof. Able to move around the ring like butter she uses her speed to dodge attacks and out maneuver her opponent’s grasp.

Technique: ★★★★☆
Shibita rarely messes up one of her high risk moves. She’s practiced them so many times to reduce the chances of her breaking her neck as much as possible.

Strength: ★★★☆☆
While not anything special she can still throw a mean punch or kick! Good enough to crack a rib if she tries hard enough!

Endurance: ★★★☆☆
Fairly Average overall. Shibita isn’t a total pussy and can take some hits but won’t take much for a striker or brawler to put her on the ground with their hits.

Defense: ★☆☆☆☆
Her weakness over all. Shibita really has no defensive strategies. She mostly uses her speed to avoid getting hit in the first place. If she does get hit tho, she is gonna feel it!

Wrestling Stats (From highest to lowest)

Aerial: ★★★★★
Shibitas main style. She loves just flying through the air cashing into her opponents. Its her main way of damaging her opponents but it more about just stunning them long enough to get a pin.

Strikes: ★★★☆☆
Pretty average when it comes to hitting others. She knows how to throw a mean punch and kick but doesn't really know any more “refined” strikes

Counters: ★★☆☆☆
Shibita isn’t really into countering... She mostly just avoids them to begin with. But if they mess up she's definitely gonna punish their mistake!

Submissions: ★★☆☆☆
Has a basic understanding of them and will use them if they yield a better result in her head.

Powerhouse: ★☆☆☆☆
The polar Opposite from her style. Shibita doesn't know any powerhouse moves and doesn’t really care to learn any.

Appearance: Shibita is an average height woman with a tan skin tone. She has a relatively toned body and healthy chest. She has long cinnamon hair and green eyes. Shibita is often seen in some form of pirate wear on her. Either it be just a mear pirate skull shirt to a full on pirate outfit for her in ring appearances. 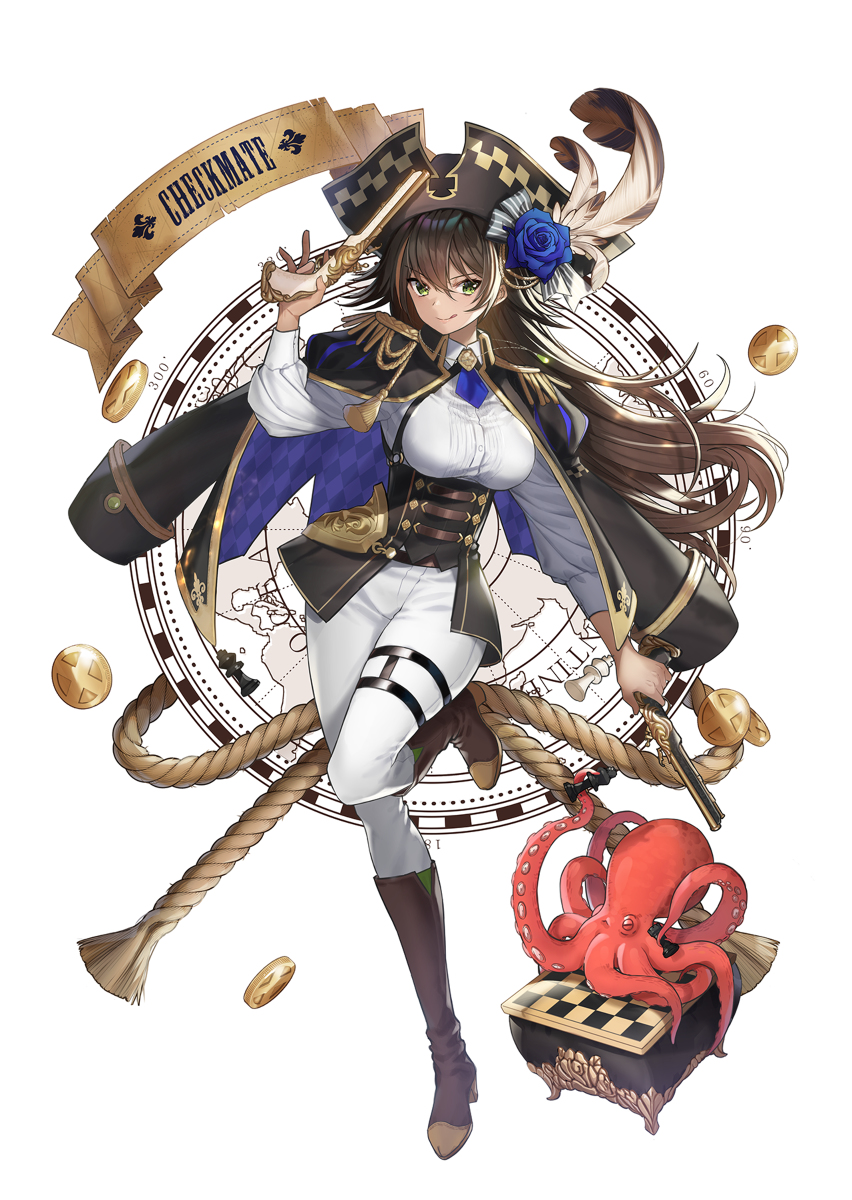 Personality: Shibita is a laid back and chill woman. She’s more about relaxing and letting life flow with the waters of time than trying to make a splash. She rarely cares about what goes on around her often forgets things. Shibita’s mind is unfocused and often drifts away as she trains or jogs. When she dawns her pirate attire tho... Shibita becomes a new person! Loud and energetic and fluent in the pirate lingo, Shibita becomes a pirate queen in personality. Smug and resourceful she plays the part of a robin hood like pirate for the fans stealing from the rich and giving to the poor! She is a trickster at heart and will start messing with her opponents head. She just loves putting on the persona and living out her dreams of being a pirate!

Past/History: Shibita was born in the fishing village of Ine located on the coast of Kyōtango. She was the daughter of a fisherman and his wife who ran their own fishing company. Life was quiet to say the least. The village had less than 2000 people in it so everyone knew everybody. For the most part Shibita was a quiet kid keeping to herself and doing her homework as she watches boats leave and come in with fish. Her life overall was pretty boring nothing really happened outside of fishing. Until her family got a new cable tv package… Shibita would soon get to see western shows and their ideas. One of the first new shows she watched was this American wrestling show. Shibata while not interested at first, found herself in awe as these massive men slammed into each other and flew through the air. She wanted to do that… She wanted to be like them. Shibita would start pretend wrestle and try to replicate the stunts she saw on the tv. She would try doing high flying moves by jumping into the water a climbing out and trying again. But there would be another thing that American tv would bring her…

Pirates! Now Shibita was no stranger to Japanese pirates as her family told her story’s about them but American pirates? They looked nothing like Japanese pirates! Where these really pirates at all? They way the dressed how they fought. What they fought with, it was so exotic to her. They had way more style than Japanese pirates! Shibitia much like wrestling instantly fell in love with it.

At the age of 10 Shibita would start helping on her parents boats. Moving bait and fish. Throwing nets and cleaning up the ships. While it was hard work it was a excellent work out for Shibita. Her strength went through the roof compared to other girls who just stayed home and studied. Her body was very much like a strongman body. Able to easily lift awkwardly sized objects.

This would eventually get her noticed in high school by there wrestling team. She was almost a natural fit for wrestling! Tho Shibitia was hesitant at first... While she adored wrestling she didn’t feel like she could pull off those moves. She was just a fisher after all… The wrestling team wouldn’t let up tho and eventually Shibita caved in and joined. As they say. The rest is history… Shibitia after playing pretend wrestling for so long found out she actually had a thing for the sport. While not a prodigy she definitely was a natural! Shibita and her wrestling team would go on to win many tournaments in there area but eventually graduation came and they would go there separate ways.

Shibita would still wrestle tho. She had a talent for it and had a decent name for herself. She was just another bland wrestler tho… She had no personality outside her own… A light bulb would go off in her head... why doesn’t she just turn herself into a pirate wrestler! Shibita would find a cheap pirate jacket and a pirate hat for her next match. As she entered the ring. The response was ecstatic. The next year and a half would see her refine this personality, from learning how to speak fluent pirate. To getting flintlocks that fired blanks. Eventually her new pirate persona caught the attention of an AFW recruiter that offered her a ticket to “The Big Leagues.”

Shibita despite coming from a fishing village doesn’t actually know how to fish using a fishing rod… Her parents never bothered to teach her.

The Fishing village she comes from is a popular tourist destination and would get lots of visitors.  They always annoyed her with their cameras. She's not very fond of outsiders to say the least.

1) Win vs Hikaru Sawazaki via submission

You may RP and make matches as you wish.