Search
Latest topics
» Ishikawa v Juno Sawyer- A Tsunami against a Glacier.
by HighFly Today at 10:23 am

» Evening gown match: Ailinn vs Amaya
by Harrier Today at 8:58 am

Let the dance begin! Sharifa and Nathifa Vs. Koji (complete)

Let the dance begin! Sharifa and Nathifa Vs. Koji (complete)

Koji was nervous about his next match, though he would never openly admit it.. Given his not-so awesome scores from the latest matches against female opponents, being in a handicap stipulation against TWO girls couldn't help but make him anxious. Not to mention that tonight's opponents were a debutant duo, and his recent experience against Selene had teached him something about debutant female wrestlers.

"Umf... dammit don't be a pussy, Koji!", the Japanese brawler scolded himself once he was standing in the middle of the ring.
"Ok it's two on one, then what? It just means that I'll have to double the ass-kicking!", he said, trying his best to keep up with his usual obnoxious personality. 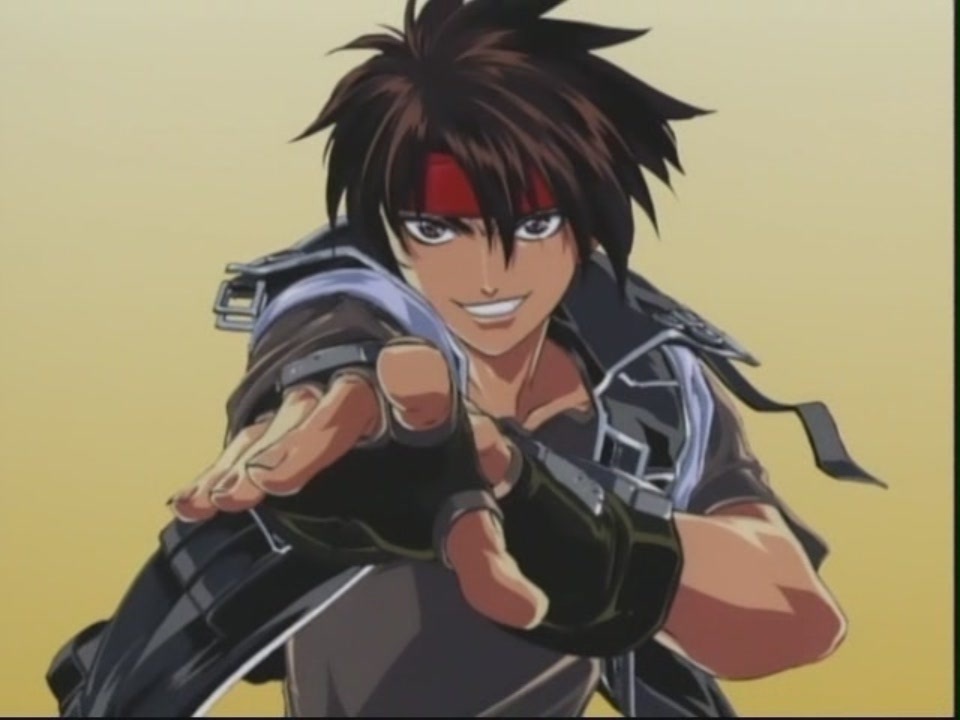 With Koji self-motivational speech getting some confidence back to himself, the spotlights turned towards the ramp where everything was ready for his "dancing opponents" to make their first appearance in a Tension event.

When the spotlights turned to the ramp, the duo’s introduction would begin. And true to their nature, the two women would walk out preforming a ceremonial dance, giving both the audience and Koji a show as they would walk down the ramp and dance gracefully. Each move gave emphasis to their curves, yet showing such grace that it wouldn’t seem possible to put such thoughts in their moves. 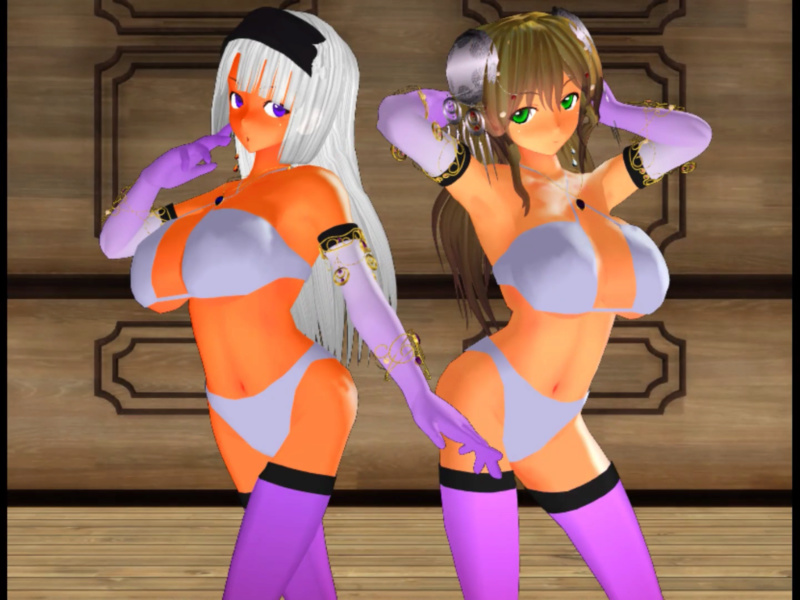 When the pair reached the ramp, Nathifa would continue her dance while making her way to the team’s corner while Sharifa would climb up and enter the ring, walking over to the corner before addressing.

“So, our first opponent is a brawler?” The dancer would comment, taking note of the obvious signs that the boy gave off. “Very well, you’ll be a good start to test ourselves.” She’d say as she got into her stance, her body swaying gently as she would be sure to keep herself nimble.

“Oh, this’ll be good.” Nathifa would purr as she leaned her elbows on the ringside, winking to Koji. “A good lookin’ guy our first time in, cant wait to have some fun with you~”

Every single male in the arena was helplessly acptivated by Sharifa and Nathifa's introductive dance show and, as expeted from a healthy young male, Koji was not immune to their charms too.

Knowing one thing or two about Tension now, he was supposed to stay focused and resist this kind of distractions but, to his partial excuse, the dancing duo truly was a sight to behold: their glistening tanned skin, graciously smooth dancing movements, and the consequent teasing provided by their bouncing curves let him no chance to stay unfazed.

And so, Koji was fruitlessly trying to suppress the rising blush to his cheeks when his busty opponents approached him on the ring.
"Uhhh... w-we'll see about that", he blurted in response, his nervousness impossible to dissimulate at this point.
"Umf...! You certainly look good yourself... but don't expect me to go easy on you just because you have cute faces", the handsome boy continued, trying his best to keep a harsh attitude. Though, with that pinkish blush on his face, it would probably make him look like a shy boy playing "hard to get".
_________________
Ryu's team:

“I would expect no less, if you did hold back you’d be nothing more than a distraction not worth the time.” Sharifa would say in response to Koji’s claim of no holding back, keeping her posture as she readied herself for the incoming match.

Meanwhile Nathifa would jump up to stand on the outer edge of her team’s corner, allowing her bosom to shake slightly at the motion while keeping a seductive glance at Koji. “I hope you’re ready, Sharifa’s hoping for a good start to our debut. and I certainly wouldn’t want you completely exhausted before we get a chance to... spice things up.” She’d leave her words off with a winking and blowing a kiss to him, loving his blush as the bell went off.

Koji assumed a boxing stance, getting ready to start. Or that's what he thought until Nathifa attracted his attention in her knowingly teasing way, obtaining the desired effect as she could see Kojio's face flare.

"Ugh... Then you may stop acting all flirty, for starters! 0///0", the flustered boy snapped back at Nathifa, unwittingly confirming how vulnerable he was to that kind of seductive mind tricks.

With the bell ringing, Koji tried his best to get his focus back on the actual fight. The busty silver-haired girl standing in front of him seemed to have a very relaxed posture.
"Alright then, she can only blame herself for being overconfident", the young brawler thought to himself, deciding to take the initiative as he sprung forward throwing a couple of tentative jabs.
_________________
Ryu's team:

Nathifa would only continue to smile in response, finding his attempt at blowing off her flirting as adorable. Sharifa however could see it more as a potential tool to use against the boy, taking note of his loss of focus at every time she had done just that. It was a clear weakness, a clear and exploitable one.

Seeing Koji make his move, Sharifa would move forward to meet him in the middle of his attack, dodging the jabs graciously before moving around him to end up behind him. If she reacted quick enough, the busty silverette would just press her bosom against his back, testing his reaction as she spoke.

“You’ll have to move quicker if you want to land a hit.” She’d say before stepping back, sending out a quick kick to see if he’d manage to block or evade it.

Determining what happened, Nathifa would regardless give a bit of free advice to the brawler boy from the ringside. “Be careful Koji, she’s a lot faster than she looks. She’s even faster than I am, so you have to keep your eyes on her.”

As expected from someone who was both an exotic dance AND a wrestler, Sharifa literally danced around Koji as she graciously dodged his punches and sneaked behind him, treating the boy to a first teasing touch of her large bosom on his back.

The heavenly soft touch felt good enough to make Koji lose his focus for a slight moment, slightly retarding his ability to see her incoming kick and organize a counter-attack. But being used to this style of attack, he could still react in time to block the kick with a guarding forearm.

"Ungh... nice try", he groaned ignoring the slight soreness.
"...And thanks for the friendly advices, both of you. I'll treasure them: Hyahh!". Cutting short the chit-chatting, Koji decided to divert from his usual brawling techniques, lunging forward for a football-style tackle instead, aiming at clutching Sharifa at waist height and hopefully bring her down to the mats, where she could not keep dancing around him. Or, that was the plan.
_________________
Ryu's team:

Seeing both the embarrassed fluster and his narrow block of her kick, Sharifa knew she was on the right track on how to properly drop Koji’s guard. And as he would aim to try and tackle her, Sharifa would move to his side and bring her knee up, aiming to deliver a swift strike to his chest from below and force him to stand back up.

If the strike had hit true, the dancer would follow up with two wide kicks, aiming to hit his sides before delivering a final solid kick to his gut, all while on a single foot. If she ended up missing either the initial or follow up attacks, or managed to land all of them, the silverette would retreat a few feet back, watching to see his recovery.

Koji was still flexing his legs muscles in preparation of his planned spear when, much faster than himself, Sharifa had sprung into action surprising him with a knee-lifting strike to his chest, and a successful double follow-up to his sides before he knew what's going on.

Grunting faintly from the painful impacts, Koji saw the last kick coming but, though he tried to block it, it still hit his guts with enough breath-taking effectiveness to bring him down on one knee, huffing to catch his breathing.

"D-Damn not bad... nghf... but now it's my turn!". Like if resetting his mind to his planned spear, the stubborn boy suddenly sprung forward, still trying to tackle Sharifa down, his move aimed at her thighs this time, due to his lower starting position.
_________________
Ryu's team:

“You’re persistent, I’ll give you that.” Sharifa would state, seeing him once again attempt to tackle her despite the clear lack of effectiveness it had brought last time. And as she had before, the dancer would dodge his attempt at bringing her down, this time kicking his feet out from under him and bringing her leg down for an axel kick on his back, knocking him down onto the canvas with a thud.

“Ouch...” Nathifa winced, knowing that her partner’s kicks could be quite painful if it landed solid, and seeing the latest attack left that message in her head. “You’re not going to catch her like that, she’s too fast for a grapple attack like that!” Although it was technically aiding the enemy, Sharifa didn’t care much for her partner’s announcements. In fact, she welcomed Koji to try and change his moves up if it provided more of a challenge to test her Phantom Dance technique.