» Evening gown match: Ailinn vs Amaya
by Harrier Today at 10:53 am

In the male locker room Torra Shinjiro the challenger was doing one last stretch before they called his name. Once he was called he began to walk towards the ring. His long red hair was flowing through the wind of the A.C of the ring, his themesong was playing as the crowd cheered. Once he was closer to the ring he began to think about this match, it was a standard submission with hentai allowed, this intrested torrw a so he signed up, now hes up against a woman named Aisha Love although some people call her Aphrodite the goddess of love.

As he climbed in the ring with only purple long boxers he began to wait for aisha to come
"Hmm hope shes ok." He said to himself as he wait 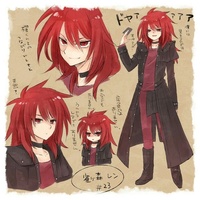 The arena darkened as Torra's opponent would make her entrance for the night, a strobe light centered down as she made her way out, adorned with a white v-sling bikini and matching knee and elbow pads, silk scarves all over her body. She brushed back her blonde hair shining in the light as it followed her every move as she began to move down the ramp towards the ring, a soft Mediterranean beat playing with a slight rock kick to it. The goddess was here and she was ready to bring the fight once again back to the ring.

She had never truly fought in the rings of Tension, the brother promotion to Friction. Both were technically new but Aisha or now better known as Aphrodite had the leg up and was going to take all the advantages she could get, "Why hello there, aren't you cute now," she said in a seductive tone, disrobing of the see through silks until she was left with only her white wrestling attire.
_________________
-Moonlit Roster
-La Avispa Negra II
-Aisha Love
-Ragna the Crushing Beast

Suddenly as torra was waiting the arena went dark, *did the power go out?* he thought to himself then a light focused on his opponent he looked and soon realized why she was called Aphrodite, she was absolutely beautiful, her long blond hair was simply beautiful, her face was so pretty and once she climed into the ring he saw her body and it looked very sexy. Her breats nice. And pretty big, her body and legs were well toned and thicc. He felt charmed by her after she called him cute. He had some time before the bell rang so he walked over to her and extended his hand to offer a friendly handshake
"He-hello there you must be Aphrodite,wow your very pretty, im torra and i hope we have a good match, may the best fighter win" he said
_________________
http://www.afwrpg.com/t19223-torra-shinjiro

Looking down upon his handshake, Aphrodite laughed, thinking how pathetic and naïve this new wrestler truly was, "O' poor dear, I'm going to have soo much fun you tonight," she says with a hand to her cheek. She laughed, not even taking the match at all seriously at this point it appeared, "I can't wait to introduce you, it's going to be fun tossing you around."

Discarding her silks and now left with only her wrestling attire, the former Aisha would prove even in Tension that she was a true Queen of the AFW no matter whom it was. The bell rung and the match would soon start.
_________________
-Moonlit Roster
-La Avispa Negra II
-Aisha Love
-Ragna the Crushing Beast

Torra was a bit surprised that she didn't shake back and now he was blushing like crazy but. He snapped out of it.
He went over to his corner of the ring and , waited for the bell to ring. Sure enough the bell rang after 3 minutes, torra slowly walked towards her but then broke into a sprint he was aiming for a classic baseball slide to trip her.
_________________
http://www.afwrpg.com/t19223-torra-shinjiro

The match would begin post haste and soon Aphrodite was ready to tumble with her new opponent, setting herself up in an up beat wrestling stance, trying to keep herself on guard once the bell rang and the two would be now engaged in fighting each other. She came at him, getting cocky by coming in a bit too quick and not sizing the situation as his slide struck at her legs, causing the goddess to tumble forward, and get herself knocked down face first.

"Ahhh!!" she'd let out as she impacted, rolling to her side as she had actually fell over him, near just missing falling on top of him.
_________________
-Moonlit Roster
-La Avispa Negra II
-Aisha Love
-Ragna the Crushing Beast

Torra was glad his move hit, but he didn't expect her to fall on top of him. He blushed slightly but he knew he had to react fast or she will attack.
So he grabs her shoulders, moved her so that her head and feet were laying across from his body and he put his feet on her back, grabs her shoulder and foot and pulled on them and moves his feet up, doing his back bender/limb stretcher move.
_________________
http://www.afwrpg.com/t19223-torra-shinjiro

"Stop it, stop it now!" she cried out as he put her into an early submission move, straining her body in an odd way that did her no good in the long run of things. She was rather flexible however as she withstood the move rather well, trying to kick around with her free foot while her other free hand nursed her shoulder that was under assault, nothing that could be done about her back. Comforting rubs would have to wait until she could manage to free herself. Her breasts pressed upward, mashing up against the mat and her chin.
_________________
-Moonlit Roster
-La Avispa Negra II
-Aisha Love
-Ragna the Crushing Beast

Torra kept his hold on her for a bit, he felt good about this match so far but however after some time due to her flailing around with her free foot and arm she manages to slip from his hold. Torra not wanting to risk a instant counter attack from her, he quickly gets up and jumps back getting some distance between the 2 fighters.
_________________
http://www.afwrpg.com/t19223-torra-shinjiro

She had greatly underestimated her opponent up to this point as she was let go by him finally after struggling enough to worm her way out of it. She was still however not really concentrating on the match as match as she should have and performing a rather rookie mistake, giving her opponent a free shot of her unguarded back.
_________________
-Moonlit Roster
-La Avispa Negra II
-Aisha Love
-Ragna the Crushing Beast