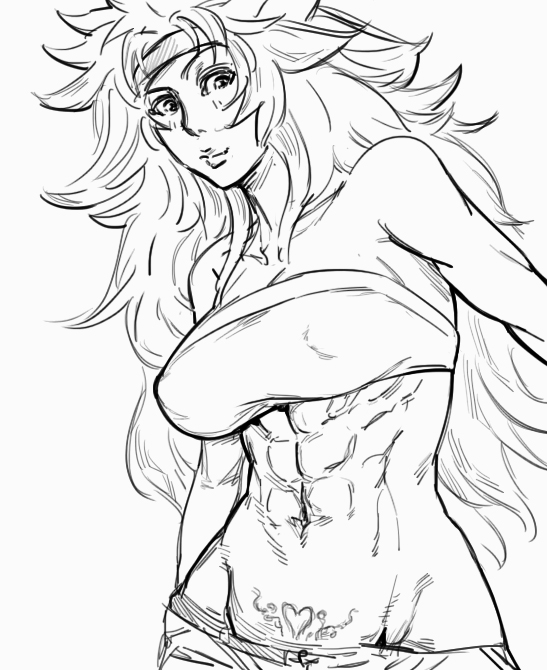 A powerhouse through and through, Mikki Wylde focuses on the simple tactics of picking up her opponent, and putting them down as hard and decisively as she can.  With nominal training in the skills involved in professional wrestling, Mikki's main focus in her youth was on power lifting.  With a highly toned, powerful build, Mikki knows enough to be able to comfortably lift most opponents, and has enough pro-style experience to put them down with flair.  Working very much in the mold of 1980's "big guy" wrestling, Mikki's focus is on taking basic power moves and delivering them with as much force and theatricality as she possibly can.

While she can pick up the pace when needed (particularly during her entrance, or to show off in brief bursts), most of Mikki's moves are taken fairly slowly and deliberately.  She tends to avoid too many high spots or elaborate moves, and opponents acting with suitable speed and skill can frustrate her attempts at grappling.  Additionally, Mikki seems to have a high pain threshold (which might be a nicer way of saying she's rather thick), and so it can take some time and effort for strikes and slams to wear her down.  On the flipside, her large frame and generally slow style make it difficult to escape holds that she can't simply power out of.

Slams and Throws- The self-proclaimed "Ultimate Grappler" is exceptionally skilled in the finer arts of picking somebody up, and chucking them around.  She's particularly fond of hoisting her opponents up as high as possible, and bringing them down in dominant fashion.  She has practiced on the unworthy bodies of thousands of screaming strip club and barroom "wrestlers," and the peak athletes of the AFW surely present a more worthy challenge than that, right?  OOOH, yeah!  Probably!  Some of them, she's sure.

Technical Skill- The "Wylde Child" is simply too dominant to waste her time worrying about things like "technical grappling" and "reversals" and other such things that are really boring and not slamming anyone into anything.  She's less concerned with stopping impressive moves during a match, and more with trying to make sure that she's the one pulling them off.

Strikes- While Mikki isn't exactly highly trained in the arts of bludgeoning people into unconsciousness, she had a lot of power to put behind what strikes she does use.  Loose, wild swings followed up with a lot of power and strength are basically the extent of what she's bringing to the table, there.

Submissions- Not exactly versed in how to perform complex holds, such as the sharpshooter, Mikki is also not exactly versed in what those holds actually are.  Seemed too "thinky" to really pay much mind to in her training, definitely making such things the chink in Mikki's armor.  Working in the "Macho Chick's" favor, however, is that she's awfully large, for most of her opponent's to try and work her into them.  Additionally, once she's got simpler holds such as the camel clutch or boston crab locked in, her build makes it pretty easy to keep them locked in.

Most of Mikki's previous matches have been traditional, one-fall matches.  With some of the less savory organizations she's wrestled for, however, Mikki's also participated in fairly bizarre matches, ranging from oddly-themed hardcore matches, mud-based battle royals, or even "Miscellaneous Objects Strapped to a Pole" matches. As a result, Mikki is open to whatever matches get thrown her way, the more ridiculous the better.


FAVOURITE MOVES
Mikki Wylde's focus is firmly on power moves, in any given contest.  Moves such as the body slam, the suplex (including the northern lights and tiger variations), assorted powerbombs and spinebuster variations are the meat and potatoes of her moveset.  Mikki also includes basic strikes, such as the knife edge chop, elbow slam, or a straight-up kick to the gut.  The only submission moves she really uses are more focused on displaying power, than actually forcing the other girl to tap, and include the boston crab, the bearhug or the standing sleeperhold.

SIGNATURE MOVES
The Leg Drop- When her opponent is flat on the mat, Mikki will jump up into the air, lifting her legs to bring one of them crashing down across the chest of her opponent.  With legs as thick as Mikki's, the move can be surprisingly devastating, when it connects.

The Atomic Elbow-  Mikki's sole â€œhigh flyingâ€ maneuver.  With an opponent down on her back, in the center of the ring, the â€œWylde Childâ€ will scale to the top turnbuckle, stand at her full height and point with both hands to the arena lights.  From there, she will leap off the turnbuckle, elbow extended down, ready to strike directly to the center of her opponent's chest.

The Splash- When Mikki is confident that her opponent is on the mat and planning to stay there, she likes to show off with this move.  Running the ropes from one end of the ring to the other (skipping over her opponent's prone body, as she does so), Mikki comes to a stop just short of tramping her foe after the final run, and launches herself up into the air.  With her full weight, she comes crashing down on them.

FINISHING MOVE
Usually, Mikki will finish off a match using one of the above listed moves, or even a combination of them (depending on the crowd, and how much she's feeling it).  However, there is one move Mikki pulls out when she really wants/needs to put someone down:

Tornado Piledriver-  With her opponent doubled over infront of her, Mikki wraps her arms around their waist, and pulls them up against herself, horizontally.  After posing with them for as long as she thinks she can get away with it, she jumps upward, twisting in the air as she folds her legs back at the knee, and brings the opponent crashing down head-first into the canvas.

With an absentee mother, Mikki Wylde was raised exclusively by her father, one of the last holdouts of the period in 1980's American where â€œbeing a manâ€ meant bodybuilding to a ridiculous extent and never buying a single shirt that covered your arms or midriff.  Mikki grew up enamored with the sort of mystique and culture that hung around her father.  Hyperactive and unfocused from an early age, Mikki did poorly in school and was far too competitive to make many friends.  The only thing that seemed to hold her attention for long was following along with her father's workout regimen, becoming well known in the (admittedly rather small) world of professional bodybuilding from a very young age.

"Graduating" high school (Mikki's actually not quite sure if she qualified for her degree, to this day), Mikki found herself out in the real world without too many marketable skills.  A few failed turns waitressing and bartending left her feeling frustrated and dissatisfied.  A condition that turned around for the young woman, after a late-night drinking session with some of the older guys at the gym convinced her to try her hand at professional wrestling.  Training hard at the local gym, Mikki stuck around long enough to pick up the basics, before touring the state.  Whether she was wrestling in high school gyms, state fairs or seedy dive bars or strip clubs, Mikki always brought a cartoonish level of intensity to the ring.  On the mic, she cut rambling, nonsensical promos delivered with all of the energy of a coked-up freight train.  In the ring, regardless of who she was facing, Mikki put thorough and unbelievable energy into every move she made.  And while the "Wylde Child" garnered a cult following, she was never shy about reminding everyone in earshot who the dominant performer was.

After awhile, however, Mikki began to outgrow regional wrestling competition.  Also, she may have burned a few bridges with area promoters with her over-the-top antics, but that's neither here nor there.  It was time for the self-styled "Ultimate Grappler" to expand her horizons.  Upon the recommendations of a few trainers, Mikki decided to try her hand at wrestling in Japan, to develop her skills in new and exciting ways.  Blowing her entire life savings on the trip to Japan, Mikki has fortunately managed to impress promoters enough just on her build to be offered a contract. What happens from there, however, remains to be seen.


QUIRKS AND FUN FACTS
-  Despite popular opinion and all observable evidence, Mikki is not, in fact, on coke.
-  Mikki has made a bit of a hobby of coming up with new nicknames.  This is either to increase her options to promote herself and produce merchandise, or she simply forgets whichever one she was previously using and moves on to the next.  It is honestly unclear.
-  Mikki's entire wardrobe does not include a single item that is not neon, in tone.  She is also a fan of animal patterns, such as tiger stripes or cheetah print.  She does not have what others would call "good taste."
-  Mikki is the last  known fan of the television show "Thunder in Paradise" on Earth, and highly treasures her VHS collection of the series.
-  Fully aware that she is a fairly massive woman living in Japan, Mikki has taken to being something of a loud, obnoxious bully when she's out in public.  It serves the dual roles of satisfying her tendencies towards aggression, this behavior also helps to draw people to the ring, hoping to see the hulking gaijin put in her place.