Preferred Matches: Any, but prefers to fight Kawaiis

2. Cut! Cut! Cut!
One of her few very effective non-holds. Sariah will usually stun her opponent with a kick to their midsection. After doing this she will usually use her long and flexible legs to deliver an almost 90-degree axe kick to the back of her opponent's head, usually leading to a very stunned or unconscious opponent.

Usually the move she will go for at the end of a match that is going in her favor. With a body blow, or a blow to the chest that winds her opponent she'll wrap them up in a bearhug, should her opponent be smaller than her she will lift them up and press their face into her chest and hold them their until the struggles cease. In the case of a large opponent or one of equal size she'll usually kick their legs out from under them and pin them to the ground, smothering them with her chest while keeping her full weight on them to ensure the only thing that happens is the fluttering of their eyelids.

Sariah in her favorite sweater: 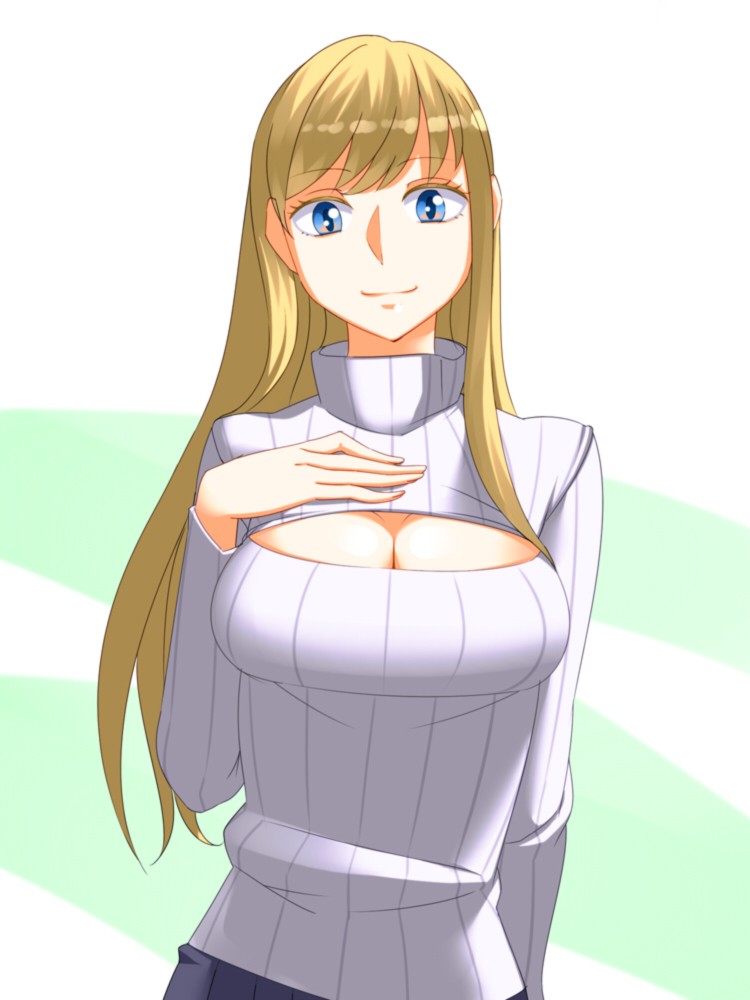 Physical Appearance: With long straight blonde hair, and blue eyes and a figure most girls would die for. With a tall slender figure with curves in all the right places she almost looks a bit too clean to be real.

Personality: Devious, if a bit controlling. She's usually quite calm and composed, but being an actress allows her to change on a dime. She can hide her true feelings almost flawlessly. She can be a bit of a tease at times as well. Very understanding and graceful in defeat though, which is quite a change of pace that most would expect from her adapted persona.

Dislikes: Drunks, Fighting women her size, being told to stop feeding the stray cats that adopted her

Past/History: Starting out her life with a passion for stage and theatrics, Sariah was a born actress. With a crystal clear voice and a body to match she quickly grew into her profession and made a name for herself. She spent quite a long  time in the theaters, doing plays and eventually found herself landing spots on television shows. Despite all her talents and efforts she could never quite land that big role she always dreamed of.

With her unusual height for a television star, she was more often than not drafted as a villainess  for fantasy television programs, some of which were catered towards children. She was often time pitted against younger women, sometimes girls as her opponents. It was at this point she started to develope a thing for girls a bit younger and smaller than herself. Despite not being a giant herself the rate at which she was finding herself fighting girls 9 or 10 inches shorter than her was staggering. It awoke something in her, something a bit risque as she started developing a bit of 'thing' for this kind of fighting.

It all came to a head when she was drafted for a role in a wrestling film that had her training with a much smaller trainer. She wound up learning the basics of the craft, and found herself to have a notable talent for grapples and reading her opponents to make up for her lack of strength and endurance. But what was more shocking was how much...she enjoyed it when she was grappled and brought down by her petite trainer. The smaller woman never went easy on her, and this was something she was not used to considering how often she would triumph over her smaller opponents. It became a full blown fetish when she discovered the AFW.

She would watch on with intrigue and excitement each time the Kawaiis fought, watching them go at it was truly a treat for her. She eventually gave up her acting career for the moment to live out a few of her fantasies in the ring, returning to her trainer for more extensive wrestling training. While she never built up the kind of muscle mass or endurance a champion would need, she found herself to be a perfect benchmark for a lot of opponents both of her size and the smaller size she preferred.

She was eventually brought into the AFW as a Grade A Jobber, not quite the makings of a champion, but a marker that other wrestlers could measure themselves up against. She had no desire to be a champion, only to enjoy herself in an environment she never thought she would ever become this involved in. Backstage, away from the other wrestlers she often states herself as "The hurdle a lot of these girls need to cross. Be it the smaller girls I love to play with or the ones who truly have a chance at becoming champions to be remembered, I have no issue being their speed bump as long as I get to have fun."

With her mind set on this goal, she adapts a persona quite fitting of a jobber. A bit snobbish but also knowing her place. She'd often look down upon smaller girls to rile them up and get them into doing their absolute best against her, or making them want to put her in their place under their heels...right where she wants to be. But they'll never know behind her protests...she is still an amazing actress after all.

Wrestling Attire: Usually dresses in a one piece bodysuit that wraps around her figure rather nicely. Taking favor towards a race queen-like attire. She often also wears leotards or even simple tube tops and shorts. She also happens to make idol outfits look rather fitting as she finds herself quite at home on stage.

-Despite her thing for petite women, she actually is not a lolicon. This fetish actually extends to all women whom are quite a bit smaller than her or lighter.

-Has a number of cats that seem to follow her to her apartment, likely due to the fact that she has a massive tin of cat food outside her door that have lead to a few complaints.

-Was actually the villain in one Live-Action magical girl adaptation...that royally bombed in theaters.