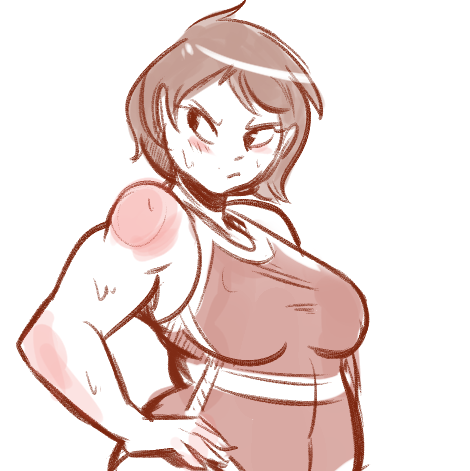 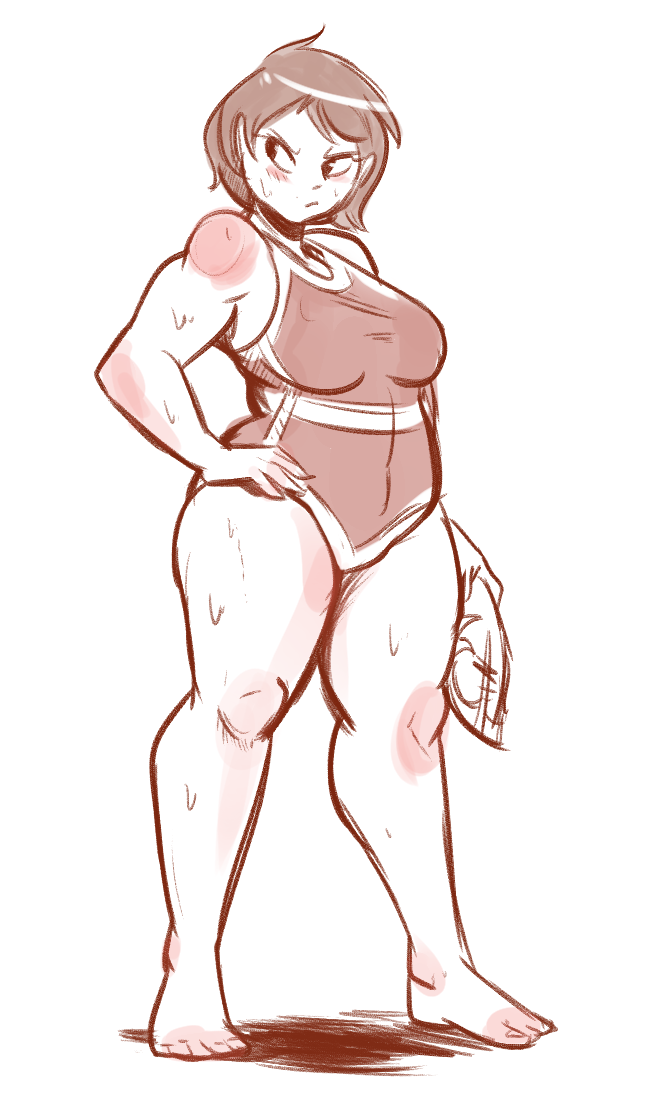 In the Ring and Ready to Rumble: History: Julie Roberts was always a big girl. Solid and heavy. She got teased in school for it a lot. Got into a lot of fights, too. Strong girl like her didn't take well to getting teased and pushed around. She came from a poor household--they had a home, and could afford the necessities, but she never had a lot. A girl like that has a lot of anger to work through. She wound up beating up a few kids. Kind of became a bully herself, y'know? Victims making victims.

Her school pushed her into wrestling to help her work out some of her anger issues, and it helped. She got to beat people, constructively, though. A healthy outlet for her aggression. Still kind of a bully, but less of a troublemaker. It helped that she was good at it, too. Eventually, kids started to even respect her and treat her decently, if not really like her.

She ended up joining an indie wrestling league once she got out of highschool. That's when she got the luchadora mask idea. Kind of gimmicky, maybe, but she liked it. Gave her a thing for people to remember her by. Still was good, though.  She didn't think that she was the best or nothin', but she enjoyed wrestling, and wanted to keep doing it. She graduated the little league and joined one with a little more prestige, a little more visibility. She got her epithet, 'The Wall', because she was tough, and she could squash people. Did pretty good there, too. Good enough for a scout from the AFW to call her up and invite her for an interview.

Next thing she knew she was on a plane to Japan. God knows what she was going to do there...

Personality: Julia is competitive, forward, and fairly serious in the ring. Her years of being bullied and bully have left her standoffish and occasionally difficult to approach, and lacks natural charisma. She's also grumpy and tired most of the time, due to troubles sleeping. A heavy coffee drinker, Julie loves animals a lot more than people--especially dogs. If you want pure, unconditional love, get a dog. Her view on other wrestlers is decidedly neutral--everyone's a competitor who should be respected a little, no matter how silly or dumb or weird they act. She might act like she thinks they're trash if she thinks it'll give her an edge over them in the ring, though--or act like she's in awe of them. It really depends.

Besides wrestling because she's good at it, she also wants to make money. As much money as possible, actually. Julia will do nearly any match, against any opponent, if a large payout is promised. She'll even work for other wrestlers, if they offer her enough cash to grease the wheels. Most of the cash is for herself--despite growing up poor, she has quite expensive tastes.

She also owns a dog named Sammy, a small yellow corgi. Julie loves Sammy very much. He is a pretty much her favorite thing, and apartment buddy.

Fighting Style: Julie favors power moves, heavy slams, and putting her powerful legs into play. She's tough and stable, with a solid foundation of muscle under a bit of fat. She's quick, but not fast, and doesn't do any fancy high-flying techniques,  prefering to stay on the ground where she's more stable.

She's also not afraid to do astoundingly cheap things to gain the advantage in the ring. Underhanded tricks, shameless lies, unscrupulous techniques, you name, she'll attempt it, if it means the difference between victory and defeat. Sometimes you just need to be ruthless and cheap in the ring to get ahead, and Julie embraces that wholeheartedly.

Special Trait: Able to crush watermelons between her thighs.