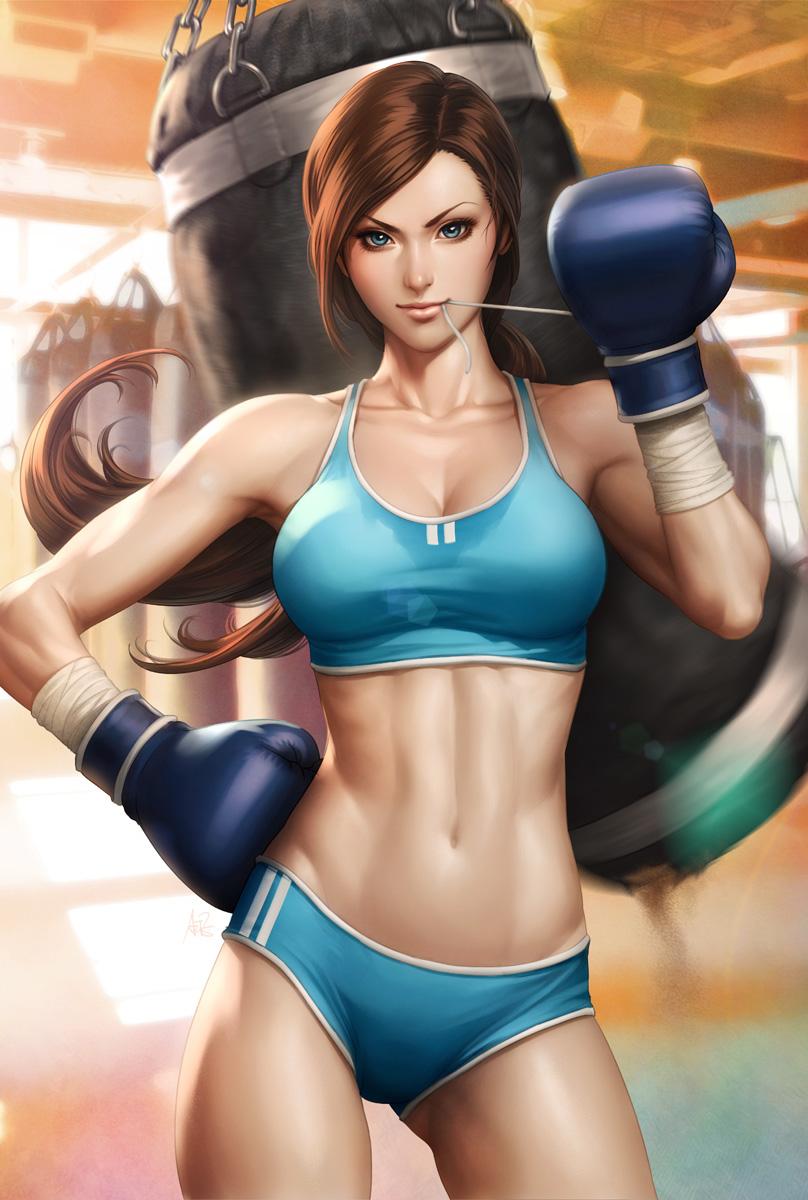 The roar of the crowd was uplifted within the stadium as the lights dimmed to darkness and music began to play. Zoey made her appearance by stepping out from the corridor and down the ramp that lead to the ring. Taped hands, striking the air in front of her as she loosened up before the fight. Head down focused on the floor in front of her as she let her hands go. Her face hidden under the hood of her blue hoodie, while wearing a sky blue robe over it. After climbing into the ring, her coach making her way to her position at Zoey's corner. After stretching out her neck and shoulders, Zoey took off her silk robe and her hoodie handing it to her coach. Her coach made quick work of tying on Zoey's blue gloves before placing Zoey's mouthguard into her mouth. Biting down on the mouthguard, Zoey turned towards the center of the ring bashing her gloves together. Wearing her usual cyan blue attire equipped with her matching sports bra and boy shorts.

Zoey, decided to put on a show for the crowd, and began bouncing on her feet. Her ponytail bobbing in the air behind her as she got to some shadow boxing. The Canadian threw a furry of straight punches in front of her following it up with a combination of hooks, uppercuts and mixing it up with some head movement. All the while, Zoey did this with impressive speed and beautiful footwork. Not once off balance or out of beat, Zoey was constantly moving too as she shadow boxed constantly changing angles, adjusting her defenses, anticipating what her imaginary opponent would do and how she would trick her imaginary opponent into doing what she wanted. After a half a minute, Zoey returned to her corner and began stretching her lower body having a sufficient warm up before the fight. Wanting her body and muscles to be warm so they could perform optimally and prevent injury.

Bouncing on the balls of her feet, Zoey awaited her opponent to make her entrance as she heard her music begin to fade into the background. This being her second fight in Momentum, she was eager to prove to the division that she was a tough contender wanting to make an impression on the fans and the other boxers within the division. Anticipation filled Zoey up, not able to sit still. She wanted to fight. Another second without fighting while she stood in the ring was the equivalent of another second without breathing.

Not long after, the lits dimmed once more, as a different song began to play. It was the national anthem of the Duchy Reka was born in, a fitting, martial chant, with a copious usage of drums. As she walked towards the ring, Reka began to make some observations on her opponent, almost all of which ended with one thought.

‘Damn, she’s hot.’ Reka thought, staring at her opponent’s good, slender, yet muscular body, as well as being impressed by her speed when she saw her shadowboxing. Reka knew she was going to be a great opponent, and she hoped that she herself would be a great opponent as well.

Reka herself began to slowly walk down the ramp, covered up by a grey silk robe. Once she’d finally enter the ring, she stood by her corner and disrobed, revealing that she was practically wearing the same attire as her opponent, a sports bra and boyshorts, albeit in a dull grey color. Her own coach, a lovely looking woman, began to ready her for the match, having her bright red boxing gloves ready for her.

“Greetings, love.” She replied to Zoey as her coach helped her put on her gloves. “Names Reka, what’s yours?” She asked, really just wanting to strike up a small conversation with her. At the same time, she began to flex, trying to make sure she was in perfect shape to fight, in order to satisfy her opponent.

Zoey studied her foe as she made her entrance into the ring. Needless to say, her opponent did not look like a pushover in the least. Seeing the muscles in her body flex as she introduced herself. Zoey thought that was rather adorable. She wasn't sure exactly what Reka was doing by flexing in front of her. However, if she had to guess it was supposedly a show of force or some kind way to impress her. She could tell that the girl was strong and was going to be difficult to put away.

"It's Zoey. It's nice to meet you Reka" Zoey said smiling at her opponent.

The Canadian girl made her way towards the center of the ring while stretching the last kinks out of her shoulders and neck. Awaiting her foe to do the same as the ref got into position ready to recite the rules and start the match. Zoey stared at her opponent in the eye with a subtle smile on her lips.

"So, 'love'... are you ready to lose to me tonight?" Zoey said cracking a grin as she stared her opponent down obviously looking at Reka like a piece meat she would love to tear into.

“I’m afraid not, I was hoping you’d be ready to lose to me.” She replied to her opponent as the ref continued to talk, her own smile growing. She herself wanted to feel her gloves strike her Zoey’s lovely smooth skin, and feel her up in general.

She was ready for almost anything Zoey could throw at her, or so she hoped. In truth she wasn’t sure whether or not she might be outmatched, but she put these thoughts aside. Now was not a time for doubting oneself, she thought to herself as she readied herself for the match to begin.
_________________
*Insert obligatory character sig here*