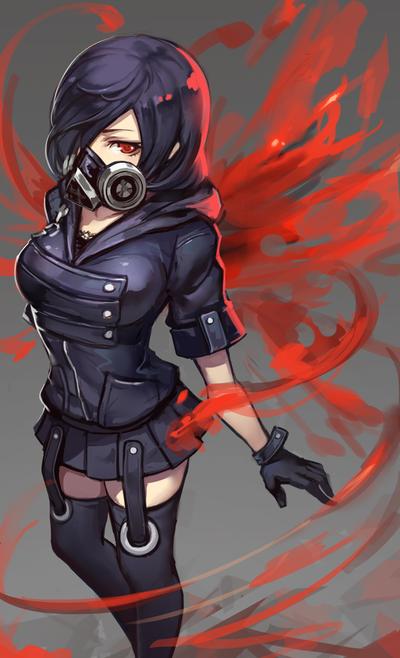 Style: Abattoir most closely fits the definition 'technical striker'.  She's an accomplished nak muay and is very comfortable with breathtaking displays of violence, but sloppy brawling doesn't suit her at all.  She prefers to hang back at range, just outside of the pocket, and pick her shots.  A well-timed counter or a stumble on the part of her opponent will usually bring her in close for the clinch - cautiously at first, but the surer she is that she's got somebody hurt, the faster and more vicious the attacks become.  Once up close, knees and elbows get thrown with grim intent, and then, having done some damage, she's comfortable with starting to use proper wrestling moves.

Hardcore matches tend to bring out the wild-eyed, bloody-minded side of Abattoir.  She fights with absolutely no regard for the traditional 'conventions' of AFW's hardcore style, using exotic weaponry, attempting incredibly dangerous techniques, and often throws herself into as much danger as her opponents.  The official 2016 AFW roster profiles describe her as 'having an obvious death wish', and while this may not actually be true, it's a solid description for the extraordinary seeds of violence she sows in her path.

Preferred Matches: Abattoir is open to most match types, but given the things she's done so far in AFW she's eternally associated with hardcore rules.

Signature Moves
Mourn - STF.  Typically, once she's got it secured, Abattoir rolls over onto her back, hooks the arm, and turns it into a 10th Planet Twister.
Butcher Block - Double-stomp from the apron to the outside.  Typically set up by putting an object, usually either the stairs or the guardrail, over the intended victim.

Finishing Moves
The Nail - Primary finisher.  A rolling elbow off the ropes, usually preceded by a barrage of kicks to the ribs and midsection.
Red Oath - Secondary finisher.  Storm Cradle Driver - in other words, half-nelson wheelbarrow sitout tombstone.  Usually she'll just stay down and hook the leg for the pin.  Abattoir is much more confident in her ability to land the Nail, so she rarely brings this one out.

Attire: Loose black clothing - lots of decorative straps, but surprisingly not much to hold onto.  Abattoir prefers short sleeves, along with knee-high boots and a skirt; the latter may seem contrary to her style and personality, but it allows a wide range of movement with her kicks and knee strikes.  Under the skirt, she wears compression shorts, MMA-style.  Abattoir's generally not seen without her mask, a black respirator-like device made of industrial-strength plastic and held onto her face by a pair of leather straps.  It doesn't actually do anything for her physically, although given that you can hear her breathing through it up-close, it would be easy for an uninformed person to conclude the opposite.

For her entrance attire, she generally wears a long sleeveless black PVC coat with a hood.  It's emblazoned all over with sigils of indeterminate origin, with a red leviathan cross between the shoulders. 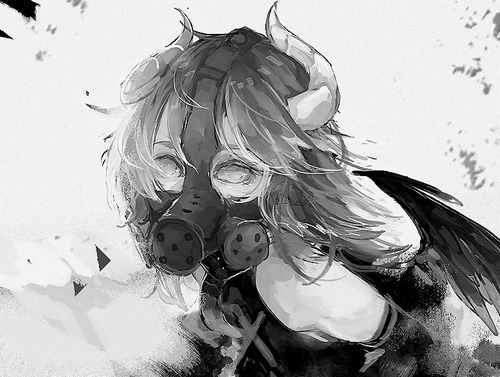 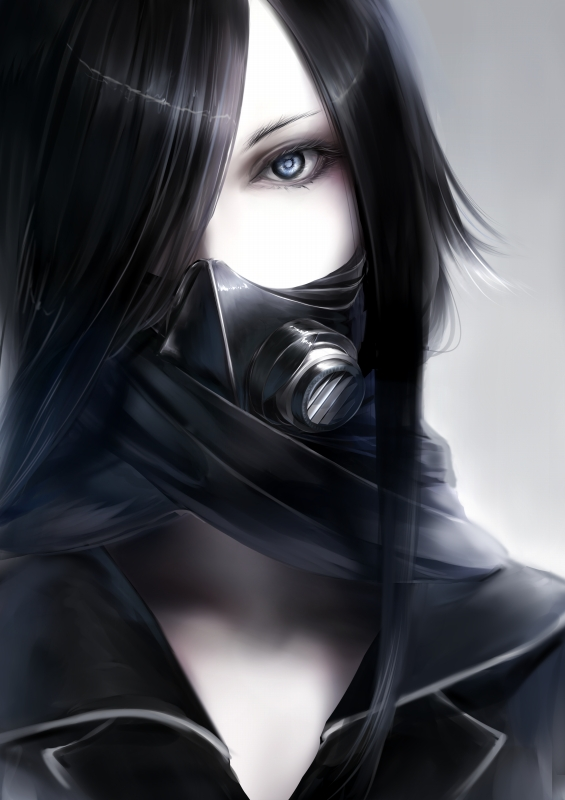 Personality: Abattoir is inscrutable.  Originally appearing to be little more than a mindless, one-note sadist, a pattern has gradually emerged that suggests she has a much more complex agenda.  It's difficult to get specifics out of her due to being deeply antisocial - she often replies to questions with short, clipped responses, and the answers she does give are cryptic and sometimes vaguely eschatological.  What can be gathered mainly revolves around two traits.  One, she loves fighting.  She really, really loves fighting.  Abattoir goes out of her way wherever possible to seek out matchups she finds intriguing, looking to test her abilities against the best possible competition.  Regardless of wins and losses, it's clear she gets a rush just out of combat itself.  Although it gives her an obvious edge in competition, that wild, violent tendency is also a tactical weakness on Abattoir's part - her unshakeable confidence sometimes leads her to take uncharacteristic risks, especially if she perceives herself as winning.

The other trait...tends to get weird.  Abattoir is convinced that she's been charged with a 'higher purpose' that revolves around testing the worthy, separating the wheat from the chaff, etc.  This can often make her actions difficult to predict (although, in keeping with her apparent ethos and her love of combat, it's easy to tell when she'll go for an interesting challenge), and contributes greatly to how hard it is to read her.  On the other hand, her 'task' keeps her obsessively abiding by a nebulous code of sorts; she obeys the rules of the matches she's in (because otherwise the result would be tainted), doesn't seem particularly interested in unfair or asymmetrical fights (although she participates in W.A.R.'s beatdowns, it's clear her heart isn't in it), and shows respect to her opponents (with the notable exception of Liberty Vella, with whom she's cultivated an impressive degree of mutual hatred).

Origins
Official records available to the AFW brass have Abattoir's birth name listed as Safiya Khouri, from the state of Michigan in the U.S.  Specifics are not available, for the most part.  The details paint an unpleasant picture - parents lost at a relatively young age (car crash), a childhood spent bouncing through the state's foster care system, 'troubled behavior', psychological confinement - and eventually the young Ms. Khouri disappears from state records altogether, having run away.  Through a series of coincidental events and a deeply-misplaced case of human empathy, she was taken in at thirteen by an accomplished muay thai ajarn, and spent the next ten years obsessively studying the Art of Eight Limbs, having apparently achieved a rigorous sense of discipline and purpose from her studies.

At twenty-three, she set out on her own, becoming something of a ronin - travelling across the United States, fighting in underground venues and illegal back-room setups for cash.  She was thoroughly experienced (nak muay start young and fight constantly, getting most of their practice in the ring rather than the gym), and proved to have a remarkable penchant for violence.
Occasionally it became necessary to bust out some weaponry, but for the most part she was content to simply knee people in the head until they'd had enough.  As a whole, it was clear that she'd found her niche and was looking to have a bright career on the amateur circuit.

Iudex
What was supposed to be a routine fight in Boyle Heights ended up being a very bad night for our burgeoning nak muay.  She ran up against current Friction talent River Styx, some time before the latter's AFW debut, and for various reasons (mostly related to skill disparity and contrasting willingness to get one's hands dirty) it went very, very badly for her.  When all was said and done, Styx had left her with three fractured ribs, a broken jaw, significant internal bleeding, and a rather extensive TBI.

Her heart stopped for five minutes and thirty seconds before the EMTs could resuscitate her, and in that span of time Safiya Khouri disappeared from the face of the earth and Abattoir clawed her way to the surface.

The specifics of what happened - or what she perceived to have happened - during her apparent death and return, and during the subsequent recovery period, are not something Abattoir talks about.  Regardless, when she was finally released from medical supervision two weeks later, she began enacting some rather serious changes in her style.  Her mask made its first appearance during this time, and the dead-eyed apocalyptic rambling and speaking in tongues started shortly afterwards.  It became obvious that she believed she'd been 'sent back from death' by something - explanations as to who or what were not forthcoming.  Her behavior became increasingly erratic and difficult to interpret or predict, and it was really only a matter of time before she became too much of a liability even for the fight promoters she generally worked for.

Abattoir explored her options, and after a period of rumination decided to try her hand at Japanese mixed martial arts (Japan's regulatory commission on such things being, charitably, a joke).  At her tryouts, an issue with the language barrier and several unfortunate misunderstandings resulted in her actually auditioning for AFW, a mix-up that caused considerable shock to both sides when she arrived at the Friction arena and immediately began committing shocking acts of violence - and worse, not wearing a bikini in the process.  Still, there was a market for the kind of gritty, visceral throwdowns she specialized in, and she seemed happy to be carrying out her mission to find powerful, worthy fighters and test their skills.  As she drifted around Friction and fought various opponents of all different shapes and sizes, it seemed like, despite how odd a combination it was, Abattoir and AFW would go pretty well together.

The offer came in early 2016 - Styx pitched the idea of a stable consisting of the two of them, plus Jessica Wright.  A juggernaut, essentially, that could run over most of Friction through numbers, wolfpack tactics, and sheer brutality.  Although hesitant about the premise, Abattoir was intrigued by the possibility of facing stronger enemies and spreading her hellish gospel wherever possible.  She agreed to throw her lot in with their cause, and the trio formed W.A.R. - a group whose entire purpose was to serve as a knife held to AFW's throat.

They debuted during a Friction match between Silver Ace and Angel, beating down both competitors and issuing a series of demands for preferential treatment, and Abattoir found herself almost immediately doubting her decision.  She was caught between adhering to her ethos and keeping her word to Styx.  Deciding that to vacillate between her allegiances would be even more shameful than what she'd already done, she doubled down and continued to participate in W.A.R.'s activities, but the nagging whispers of doubt still nipped at the back of her mind.

Only time could tell what she would eventually decide.