Gabbie has a learned knowledge of kickboxing. Savate, Muay Thai and American Kickboxing

Strategy:
Gabbie likes to hit and run. She uses her legs to wear her opponents down and uses her punches to set up finishing kicks. When she's boxing normally, she tries to out pace her opponents and score a lot of hits and counters to impress the judges.

Physical Appearance:
Gabbie has short blonde hair that often gets in her face. It's messy and she pins it back with barrettes and hair scarfs. She has blue eyes that can look aqua in certain lights. They look hard against her thin but smooth skinned face. Her nose is small but slightly pronounced and her ears are just a little bit bigger than they should be on her. Gabbie's body is toned and although she isn't the tallest girl around, she looks like she's honed her body in pursuit of her craft despite looking a little young for her age. 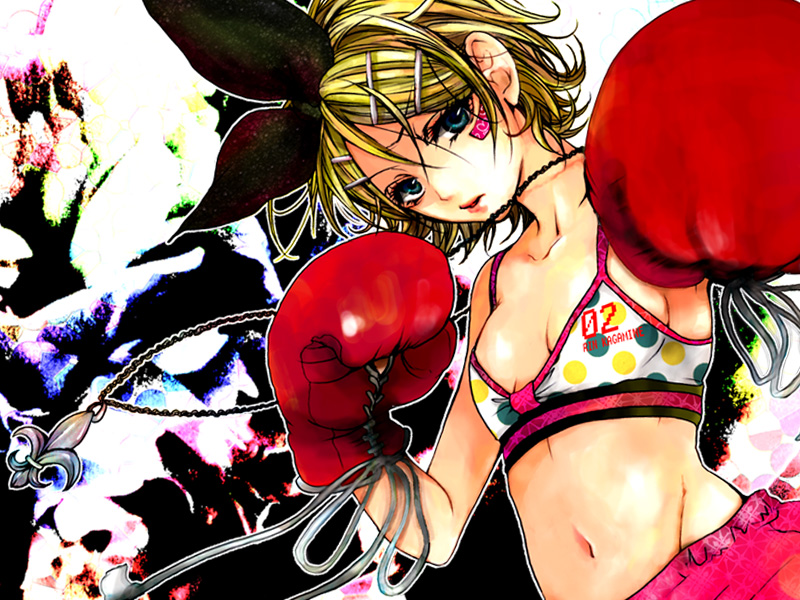 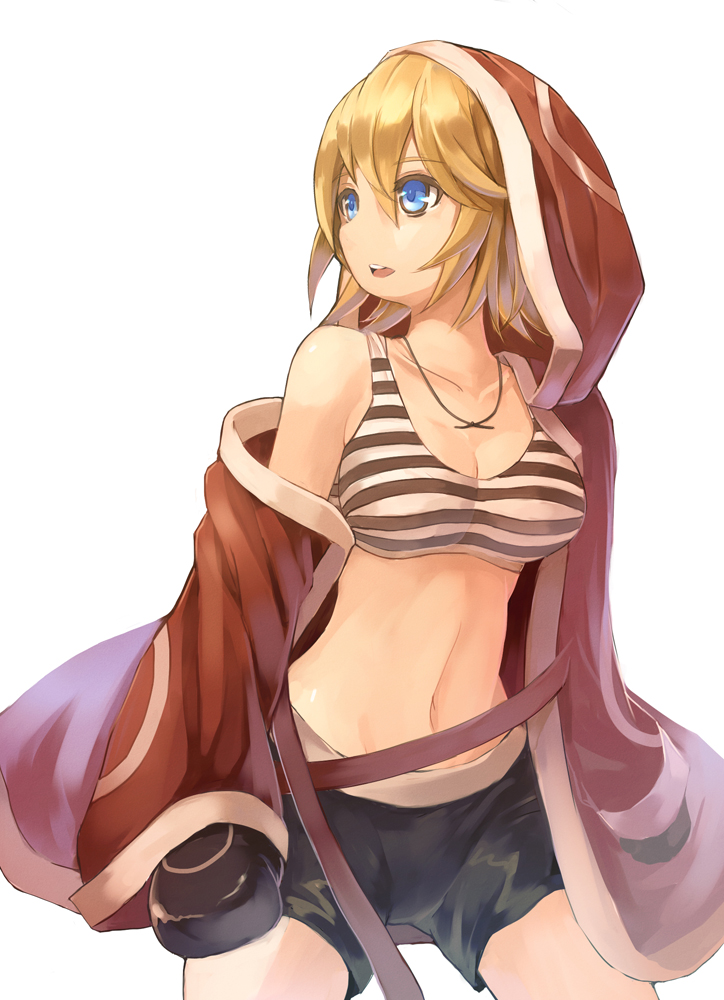 Boxing Attire:
She'll wear black gloves, black trunks with white trim and a black and white striped top or pink trunks and red gloves with a white shirt that has pink trim and multicolored polka dots on it. She'll pin her hair back with barrettes and/or hair scarves.


Personality:
Gabbie is a serious girl who likes things to be a certain way. She has a hard time not being cynical but she also tries her best to be respectful. She doesn't want to be seen as someone who is rude or willing to go too far in the ring but she can also be aggressive, especially in the ring. She likes to keep her focus on the task at hand and hates superfluous things. The little things in life, to Gabbie, are nothing more than distractions. She'd only stop to smell the roses if it helped her train better, for example.

Past/History:
Gabbie was born into a super competitive family. Her father owns a Savate Instruction school and trained Gabbie from a young age. The girl fell in love with it and karate and wanted to use her training to go pro one day.

Her older sister seemed like a prodigy as well, however, she decided to train in jiu jitsu rather than kickboxing. As the sisters grew up, they sparred for each other and Gabbie developed some talent for Jiu Jitsu but never committed to it as heavily as she did to boxing.

They both shared success and Gabbie had won every competition she entered in Karate and Kickboxing. Her older sister had nearly the same success, but in Jiu Jitsu, she would always make it to the finals and lose. Gabbie was infuriated at how her sister could never get over that hump when she was obviously the best around.

But Nicole took losing a lot better than Gabbie did. Eventually her dedication to Jiu Jitsu waned and she started focusing more on boxing but didn't seem to take much of it seriously. She even got into normal wrestling and when she graduated from high school went off and trained in a gym. The two had lost a little bit of their connection and Gabbie even heard her sister had ended up doing foxy boxing of all things.

Gabbie continued to focus on her boxing and kick boxing, however, and when she heard about her sister, she packed up and moved to Thailand. She joined a professional Muay Thai circuit and excelled there as well, bringing her own skill set to the sport. She would have been content to dominate in Thailand until she got an unexpected visit from her sister.

After Gabbie's match, they talked. Nicole was moving to Japan. The AFW, the biggest wrestling organization in the world, had opened up a boxing league in Yokohama. She decided she wanted to join because she knew she could have fun there. Plus, if she was interested in wrestling, she could join that too.

Gabbie was against the idea at first, believing that the league was not respectful to boxers. However, when she began to watch the show, she had scene something incredible. The girl who had beaten Nicole at all those tournaments was there. She was a wrestler and she was showing off her martial arts and her school.

Gabbie quickly signed up. She would go to Momentum and own it and make sure that her lackadaisical sister wouldn't tarnish their own name with her mucking about and utter lack of seriousness.

Re: The Sisters Desjardin

Nicole has trained heavily in Jiu Jitsu and has studied in Savate, and American Kickboxing.

Boxing: Nicole likes to use her punches to set up hard, devastating kicks that can KO her opponent. In more sensual matches, she will use her kicks to try and put a girl in the corner where she can do some glove work.

Wrestling: Nicole will use her knowledge of grappling to get a girl down to the ground. Once there, she will try and pin them or make them orgasm, depending on how the match is.

Physical Appearance:
Nicole has long, straight back length red hair. She has long bangs as well and it even hangs down the sides of her face a bit. Nicole has blue eyes and smooth skin. She has long lest and a large best. She has defined arm and leg muscles but only the faintest definition on her abs. She always has a grin on her face. 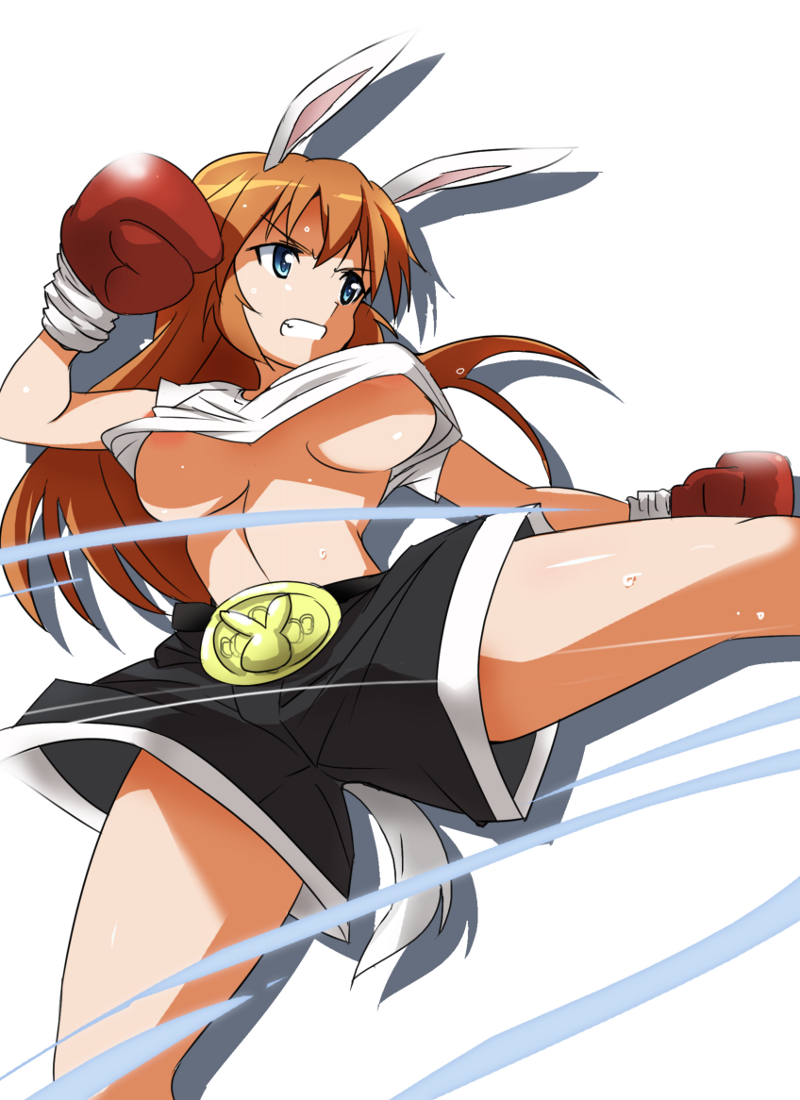 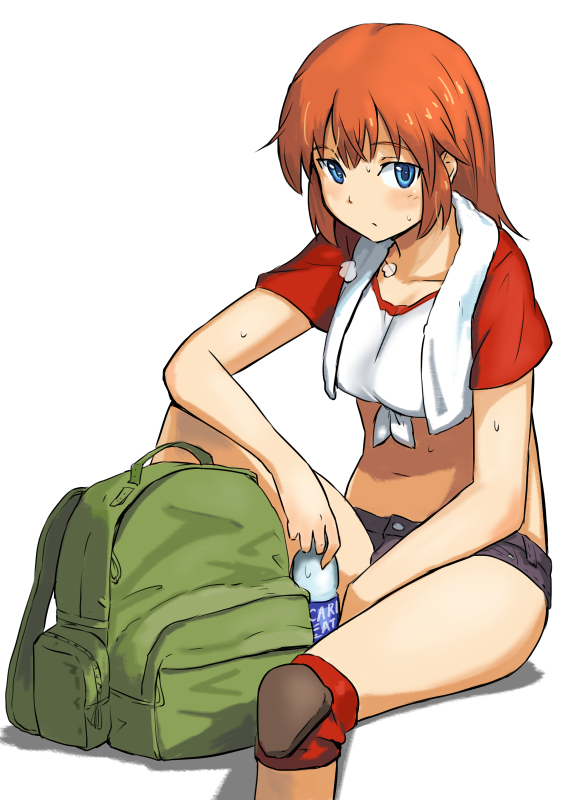 Boxing Attire:
In the ring, she'll wear black trunks and a white shirt or sports bra if she has to, though she likes wearing baggier clothes in the ring, especially when wrestling in a particularly sexy match. She will also always try and wear bunny ears and a tail. She thinks it's cute and maybe even a little more so in a sexual match.

Personality:
Nicole is breezy and carefree. She likes to laugh, she likes to joke and even if she's been fighting her whole life, she doesn't get very serious. She is good and trains, but isn't a perfectionist and has no one in her life (other than her younger sister) to tell her that she MUST win. She prefers to win but as long as the competition is good, or sexy at the very least, then she can handle a loss.Nicole is outgoing and loves to be around people and have fun and talk to whoever she can. She is concerned with others problems and will help them if she can. She feels like she's in a good place in her life and just wants to enjoy the things she's worked for.

Past/History:
Nicole was born into a super competitive family. Her father owns a Savate Instruction school and trained Nicole from a young age. However, Nicole was a prodigy, but not in Savate. She trained, instead, in Jiu Jitsu and became serious in that while training with her father's gym with her sister Gabbie who preferred their family's preferred style.

As the sisters grew up, they sparred for each other. They both shared success and Nicole had won nearly every competition she entered in Jiu Jitsu. Unfortunately, she never seemed to reach the pinnacle of success that her sister did in kickboxing. While Gabbie would always come home with big first place trophies, Nicole's shelf was littered with runner-up ones.

It never really bothered Nicole, however. She only ever lost to one girl and when they weren't in the competitions together, Nicole always took home the gold. She knew she was good, there was just apparently one other girl in Canada who was beter. She figured that somewhere in the world there was another girl who was better than that girl and so on and so one.  Gabbie, however, was infuriated at how her sister could never get over that hump when she was obviously the best around.

Eventually Nicole's dedication to Jiu Jitsu waned and she started focusing more on boxing but didn't seem to take much of it seriously. She even got into normal wrestling and when she graduated from high school, went off and trained in a gym. leaving Canada and getting away from the pressure her family put on her felt great even if Nicole and Gabbie lost their connection. Nicole ended up doing a foxy boxing circuit and was pretty good! She even found the joys in a more sensual aspect to combat that she never knew in the rigid schools of her youth.

Nicole was loving life and even moved to Japan where they had added a boxing federation to the monstrous wrestling organization that was the AFW. It was amazing and Nicole knew she could live there forever. However, she began to miss her sister and found out that her lil sis was now tearing up the pro Muay Thai circuit. It was just like her sis. Thailand wasn't too far from her now so Nicole hopped a plane over and saw Gabbie in a match. It was wonderful.

After Gabbie's match, they talked. Nicole told her she had moved to Japan. Gabbie was against the idea at first, believing that the league was not respectful to boxers. Nicole knew that Gabbie needed to live her own life, but she insisted to Gabbie that she was going to be happy there. However, Nicole was surprised to find out that Gabbie had decided to move there as well. It was great! The Desjardin sisters were back and better than ever! Nicole was truly pleased.