Search
Latest topics
» Kanon Sonozaki vs Amber O'Finnegan
by Edmund Today at 4:53 am

» Evil Rose Vs. Anesthesia - Oil Wrestling
by acuya Today at 4:21 am

Strategy: Luchadores are traditionally more agile and perform more aerial maneuvers than professional wrestlers in the United States, who more often rely on power and hard strikes to subdue their opponents, and Jaguar is no exception. He prefers to go for high flying attacks by using the ring's ropes to catapult himself towards an opponent, using intricate combinations in rapid-fire succession, and applying complex submission holds. Additionally, Jaguar has little regard for the rules and will easily bend or break them if it suits him.

Finishing moves: Xbalanque’s Blowgun – Jaguar does a series of roundhouse kicks into the opponent’s head and then grabs the opponent’s opposing arm and whips them into the ropes. When they bounce back, he jumps up and wraps his legs around their head and slams them to the mat with a Frankensteiner.

Jaguar’s Pounce – After climbing the corner turnbuckle, Jaguar jumps from the top rope and does a front flip onto the opponent’s shoulders and immediately performs a hurricanrana to flip and slam the back of an opponent’s head into the ground. Since he lands already seated on the opponent, he can immediately go for the pin. 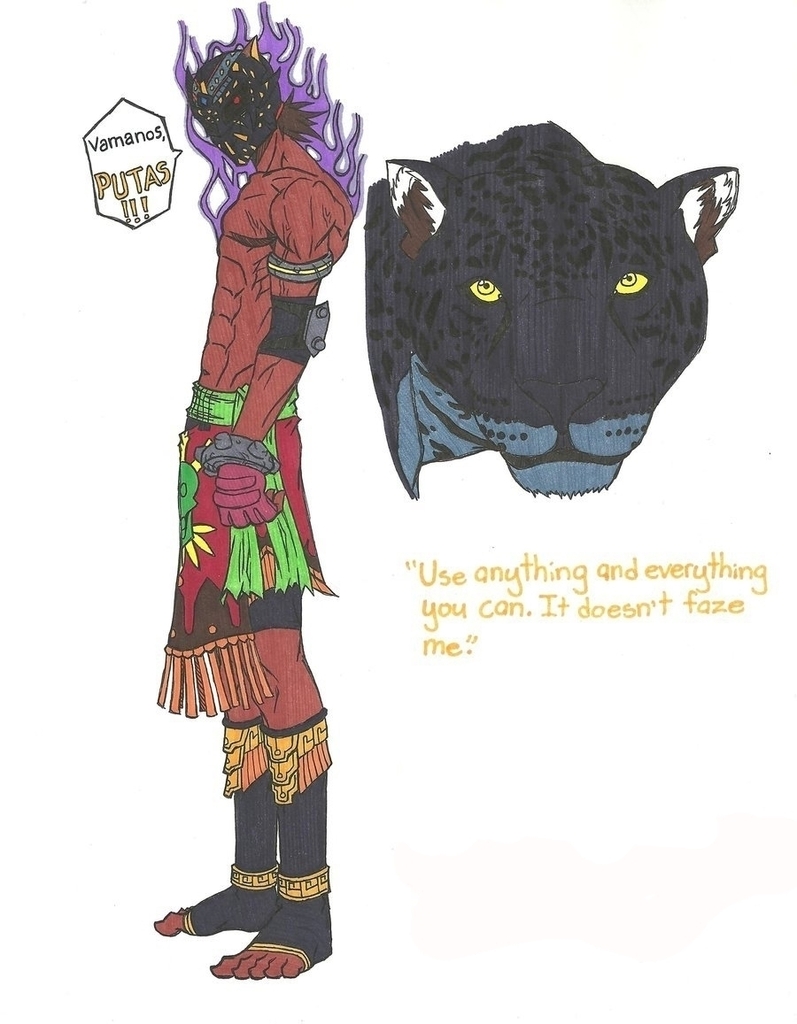 Personality: Jaguar is usually a no nonsense type of guy that prefers when people and things are straightforward. He can be a bit abrupt and pessimistic, but he’s also not afraid to admit when he’s wrong. He doesn’t put much value in rules as they mostly hold people back, and honor really doesn’t mean the same thing it used to. He’d just as easily break a rule as he would follow it if it meant getting what he wanted.

Past/History: Balam was born a poor Guatemalan boy and the youngest of six siblings. While his parents may not have been the richest, one of his fondest childhood memories was getting together with his family and watching the luchadores on the television. It was always his dream as a child to step into the ring and hear the people cheering his name as he defeated fantastic villains and noble opponents alike. He recalls many times coming inside in the evenings with all sorts of bumps, bruises, and cuts after a day of lucha libre with his brothers, only to be scolded by his mother. Upon coming of age, his parents sent him to Mexico with a large chunk of their savings in order to attend a college, but Balam saw an opportunity. Rather than using the money for school, Balam commissioned himself a mask for the ring and an outfit themed on the jaguar as a tribute to both his name and heritage. Thus, Balam became the Jaguar Blanco, the White Jaguar, and he enrolled himself in a minor league as one of the técnicos, the equivalent of a face.

Jaguar’s early career was marked with a distinct series of unexplained losses. While he had the technical skill and the athletic ability, his desire to always do the honorable and follow the rules to the ‘T’ made him an easy target for the rudos/heels. Just when the White Jaguar would get close to a pin, he’d get blindsided by another luchador and lose. It frustrated him to no end but there was nothing he could do about it. He’d get no respect until he earned it from winning, but every time he tried to win he was cheated. Eventually enough was enough and he challenged the so-called ringleader of the local rudos to a lucha de apuesta, máscara contra máscara, a mask vs mask fight. Such a bet was normally honored by all luchadores, rudos and técnicos alike, and whoever lost would suffer the ultimate humiliation and be unmasked. Between bitter rivals, it could also be used as a way to settle the feud completely and Jaguar saw it as the only way he was going to advance if he wanted a real shot at his dream.

Jaguar fought his opponent to a standstill, and in the end he was bleeding, battered, and bruised but on the precipice of victory. As he began to untie his opponent’s mask, he was again ambushed and KOed by the rudos despite his opponent’s protests about a fair loss. By way of KO, his opponent was declared the winner and Jaguar was unmasked. With his face and identity revealed he was humiliated and forced to leave the league and his dream behind…..for a time. The loss had sparked a change inside Balam that would alter his future forever. After a period of self-loathing and moping, Balam decided to go back after his dream with a vengeance. This time he became Jaguar Negro, the Black Jaguar, who was loyal to friends and ruthless to enemies.  He adopted traits of both técnicos and rudos, playing by the rules only so far as they suited his goals, and his new-found ethics easily carried him up through the ranks till his moniker became a household name.

Jaguar now finds himself amongst the hot-shots in the AFW, having traveled to Japan on a wrestler exchange program partnership with his home league. The Japanese wrestling scene is certainly different from what he’s used to, but that’s not going to stop the hunt of the jaguar.


Fun Facts:
-- He’s straight……mostly. Call him curious if you must.

-- Rarely ever removes his mask, will often go out in public and train in the gym with it on.

-- No one really has a good idea of what he looks like underneath the mask.

2. Yuki Nakamura vs Jaguar Negra (WIN) - Jaguar nets his first real win in the AFW, simultaneously displaying his prowess and hints of a brutal darker side.

4. Jaguar Negra vs Ivan Komorov - TLC Match (ONGOING) - Jaguar faces what might be his toughest opponent yet, the giant Russian Ivan Komorov, in a brutal Tables, Ladders, Chairs match. One things for certain: somebody's getting hurt!