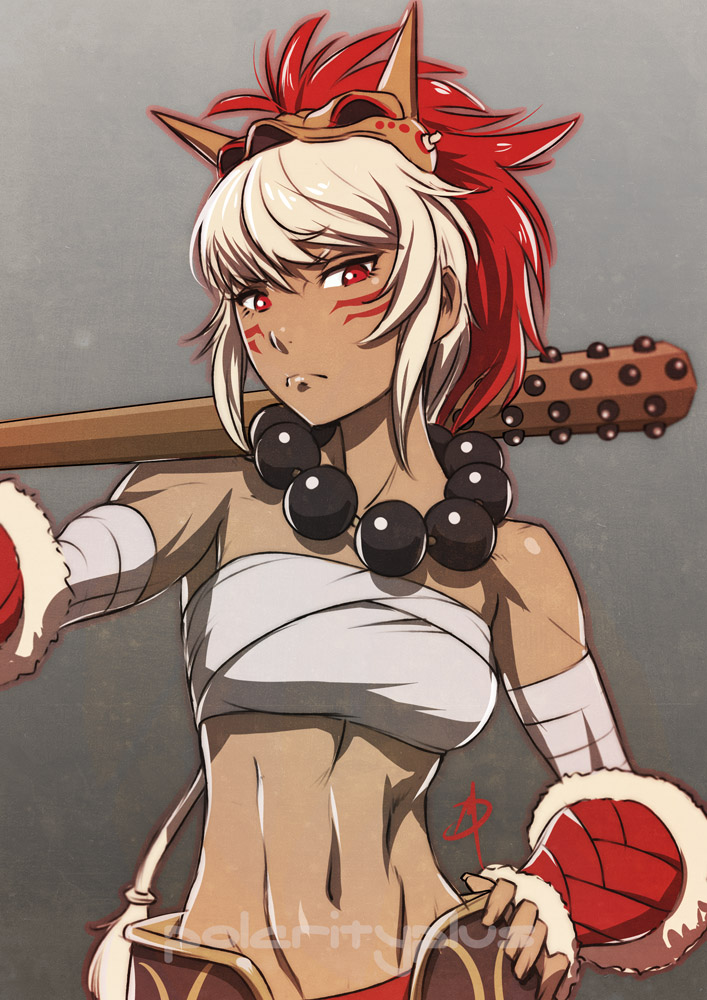 Beyonce is a stoic individual, who usually keeps herself composed as much as she can. She has little time for nonsense and is often described as humorless. Although she prefers to live a Spartan life, she can find some appreciation in culture and history. She's strong and always maintains a peak level of fitness, making sure she's never out of fighting shape.

Beyonce is the daughter of an Egyptian and a Japanese nurse. Her Father, Hassan, fled from Egypt when he himself was a young child. Driven out of the country, he ended up settling in Japan where he would meet his future wife. Together they had Chiaki and brought her up in a strict but loving household. They taught her discipline but also instilled a sense of tolerance in others that would help to shape her life.

She enrolled in martial arts at an early age, and succeeded in Karate. Unfortunately, she would need to put those skills to good use as she grew up. Her tanned skin and unusual hair color made her stick out in her Japanese school and while she could always handle one on one matches, she had would start to get assaulted by groups. Coming home with bruises and scars was difficult for her parents, who wanted their daughter to do the best that she could without having to resort to violence.

It was difficult for Chiaki to take these lessons to heart when faced with relentless bullying. Simply turning the other cheek and merely defending herself was not enough and she would quickly try and use a different tactic to keep herself from being bullied.

During a particular fight, she managed to fend off a few of the weaker girls. Not part of a gang, but the sort who would join in when they thought they smelled weakness. Chiaki beat one down and, hearing the reputation, chastised her, for always trying to defend and never attacking. So, Chiaki decided to attack and put one of the girls in the hospital.

The bullying seemed to taper off a bit after word spread and any time that the other students would start to return to their old patterns, Chiaki would put another one in the hospital. She could always say that she was defending herself and the teachers usually bought it. It was definitely true, but less and less Chiaki was waiting for the bullies to come after her. At the first hint of some repercussions, she would put a prospective girl down.

By her senior year of high school, the students were afraid to look her in the eye. She didn't mind that one bit.

While she was in high school, she joined a Joshi group. She had become bored with the routine of Karate and felt as though it was not going to teach her the things she was looking for. Wrestling had been much more entertaining. In the group, she was the kohai and was treated similarly as she was in school. Though now she was around adults, it felt much the same. This time instead of just picking on her for the sake of her differences, they piled all of the extra work on her. She was always the last to be able to get a chance to do anything, and she was never taken under the wing of any of the veterans, left to spare with other prospects or some of the low level talent who had not earned a place on the pecking order.

Still, Chiaki learned and when she finally graduated high school, she was begrudgingly allowed to to do more and more but she found that she was often put against the toughest opponents. She didn't mind, but she came to understand that she was trying to be driven out of the group. She was also starting to get tired of being put against girls who were much better experienced than she was. Losing was leaving a bitter taste in her mouth, but she was slowly getting better with every day.

Once day, she had another match against a rather tough girl. She eventually pulled out the victory, but she also put the girl in the hospital and it seemed like it had been clearly intentional. Rather than be kicked out of the group, she left. After that, she decided to try her luck in the AFW.

Attire:
What she wears in the picture. (She takes off the mask, prayer beads and gauntlets before a match though.

-Beyonce knows what connotations her name has in the west (and beyond). She insists on using it anyway. (Perhaps in spite of its infamy)

-Beyonce adorns herself in an Oni-like costume, complete with club, prayer beads and a mask. She removes them all before she wrestles but may not be afraid to use her club if she deems it necessary.

-Beyonce's father is a Coptic christian and former Muslim. Her mother practices Shinto. She has been allowed to decide her own beliefs for herself and her mother and father have been quite liberal in that respect. Both have tried to keep her cultured and she has been to Egypt many times. She has fallen in love with both the Egyptian and Japanese cultures and feels that she is a part of both of them equally. In that regard, she chose a more Japanese costume while taking on a more African name.

Re: Beyonce - Above All

Timeline
1. Beyonce Vs. Helvetica Lee - Beyonce faces off against a loudmouth "Student of the Game" in her debut.
2. The Post-Game: Helvetica & Beyonce - The Loudmouth wants another word.
_________________
Ask for a name change at your own risk!