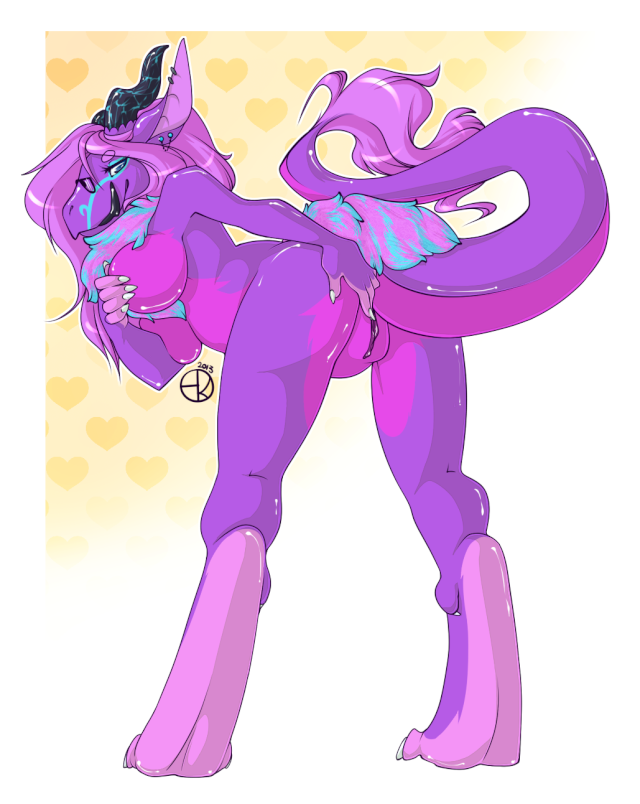 Daisuke Maxwell. One of the number one competitors in the Fur And Feather division and a Queen on her own planet, truly there was no better target for Ray to humiliate and destroy in front of an entire audience, just thinking about it gave her delightful shivers. Yet, no matter how hard she had tried Ray couldn't get Daisuke to go against her In the ring. Supposedly it was because of some stupid tournament but Ray didn't believe that for a second. The little skunk was probably just terrified of her, and honestly Ray couldn't blame her, she was of course the most powerful Fur And Feathers wrestler around, who wouldn't be afraid of her? Nevertheless Ray wanted a match, and she would get one. One way, or another.

It had just hit midnight on the planet Shiiryuen, the moon was high in the sky as Ray found herself hiding in the shadows within a large mall complex. Connected to this colossal building was a much larger arena, in which a popular sporting event was being held with a special guest star, Daisuke. This particular Queen was about to have a very bad night as the patient reptilian waited for her to exit. If Daisuke refused to have a match against her then Ray would simply have to instigate something herself. Even if it technically wouldn't be official she couldn't care less, a victory was a victory, no matter how she obtained it.
_________________
Fluffy Tail's Fluff Circle

Unlike a good chunk of the people that were there, Daisuke and Sion took one of the side exits and cut through part of a mall that was connected to the local transit system. Usually they would have someone pick them up but they wanted to give those that usually did that a break. Things were usually pretty lax so it wouldn't be a problem, plus a number of the locals did it too, but the route they took was quieter, but a bit longer of a walk.

They stopped at a washroom as one of the sodas Sion had earlier was about to go through him. Daisuke let him go do what he had to do and waited for him. She took a glance around, things looked and felt different in here this time of night. She didn't see anyone else in the area, other than maybe a couple of people that passed by them before they stopped. She did also hear something from a little bit far away, but didn't think much of it, thinking it might be one of the janitors.
_________________

Hearing the still ecstatic people leaving the arena Ray continued to eagerly wait for her target. At first she believed that Daisuke had left in another manner or perhaps used one of the other exits, had she been waiting here all this time for nothing?! Just before Ray completely blew her top she spotted Daisuke waking through the dimly lit mall, the plan had worked! She was going to go over there and take that skunk down right now! Unfortunately that's when she noticed that her would be opponent wasn't alone. Who was this guy!? He was going to completely ruin the plan! She couldn't do anything with that moron there!

Just as she prepared to stomp off and leave in a foul mood Ray saw the guy walk into a washroom! At last leaving Daisuke alone. Realising that she had to act now or never Ray simply exited her shadowy cover and began to slowly stride closer, happily smiling as she went. In an attempt to not seem suspicious or threatening Ray was wearing a tight one piece purple swimsuit which she had stolen earlier, there were swimming completions being held in the very same arena Daisuke had just come from so it would hopefully prevent Ray from standing out. "Oh my stars! Is that who I think it is? I think it might just be! What an honour!" Ray would excitedly babble as she got closer, doing her best to act as if she was nothing but an enthusiastic fan.
_________________
Fluffy Tail's Fluff Circle

Daisuke wasn't sure of what to think of Ray's entrance or what she was wearing. Typically everyone knew who she was and usually wouldn't make that big of a deal. Sure there was the respect factor that came in but something felt a bit odd to her. "Er, thanks. I'm guessing you're not from around here. What brings you here?"
_________________

Already Ray could tell that Daisuke was wary of her presence, but the only thing she could do was continue on with the act and hope that her performing skills were good enough to get her close.

"Oh how silly of me! I was invited here to take part in the main arena swimming competition! Was just on my way back home when I came across you! How lucky I am!" Ray chirped with the utmost sincerity, making sure to slowly continue advancing towards Daisuke. If she managed to get close enough Ray would casually lean against the wall closest to the washroom, her smile would remain as bright as ever until she would abruptly grab the washroom door handle, snapping it off with a loud crack.
_________________
Fluffy Tail's Fluff Circle

"Oh. Seems kinda late for that though, you lost or something?" She wasn't sure what the deal with Ray was but the closer Ray got the closer more Daisuke would begin to feel a bit uncomfortable. She wasn't sure if this girl was hitting on her or what, which wouldn't be the first time someone showed interest in her. But something about Ray was making her feel different, but couldn't quite figure out why.

By this point Daisuke was very obviously uncomfortable, but luckily for her Ray was already in place and didn't need to keep her performance up any longer. Executing the next phase in her plan Ray abruptly tore off the washroom door-handle! Simply dropping it as her previously joyous smile fell into a much more devilish grin.

"Oops, clumsy me.." Ray purred with a cold undertone as she moved her attention away from the door and back to Daisuke. "Honestly.. I thought you would have fucking recognised me or something.. Surely even a stupid bitch like yourself has heard of my brilliance..?" She continued whilst slowly moving in on Daisuke even further, her tone of voice only growing more maniacal by the second.
_________________
Fluffy Tail's Fluff Circle

She was taken by surprise when the door opened and she fell in. "Can't say I have" she tells Ray as she is being backed up. Usually she could fight back, but with how this was all happening it was a bit difficult to stand back up and do something about it, plus she didn't know what this one was capable of in this moment, which is why she also didn't scream out. For all she knew Ray could have a concealed weapon or something. "What do you want?"

About 30 seconds from then her husband would come out from the other washroom. He would look around, wondering where Daisuke went. He would guess that maybe she had to go as well. He figured he'd give it a bit before checking to see if she was indeed in there or not. Good thing the door closed behind when it did or else Sion might see what was going on.
_________________

"What do I want..? Oh come on that ones easy.. I've been after a match against you for quite some time now and at last im going to get it.. Don't care if you like it.. Or not.." Ray spat with a venomous tone whilst she continued to eerily stalk closer and closer, punctuating her malicious intent by aggressively clicking her knuckles. "How the fuck is someone like you a top competitor in wrestling..? Honestly.. Its less than pathetic.." She continued on in the same toxic manner, at last stopping her advance to give Daisuke a chance to get up.

"Tell you what.. If you are willing to have your ass kicked right here and now I will never bother you outside of the ring again.. And because im nothing but generous I'll even let your pathetic little self choose the winning conditions.." Ray growled in her usual taunting manner, taking a look at her nails whilst she waited for her opponent to respond to her offer.
_________________
Fluffy Tail's Fluff Circle

Even though she now kind of recalled who Ray was, given the hour, Daisuke just wanted to get home. Before she could even begin to think of anything after standing up she heard Sion calling from the other side of the door to see if she was alright. Daisuke responded that she's being corned by a psycho, which Sion began to worry, though because of what Ray did he couldn't get inside.

"You know the second I get out of here you're going to have a big target on your head" Daisuke tells her, implying that if her husband doesn't get to Ray first someone else will. You want to fight me so bad? Well be careful for what you wish for cause you might just get it." She was starting to sound firm. "If you manage to live through the night I'll have someone find you and tell you where to meet me and there I'll give you the low down." As she says that she can hear Sion trying to break down the door.
_________________