Search
Latest topics
» NWO: Ataru Vs Shizuka
by wrestleryu Today at 1:40 am


"Ladies and Gentlemen! Tonight is the first ever Tension Climax Pay-Per-View! I hope you're all ready! With a name like that, it's sure to get hot and heavy in more ways than one! Let's kick things off with your current reigning champion, Reira Kirishima!" 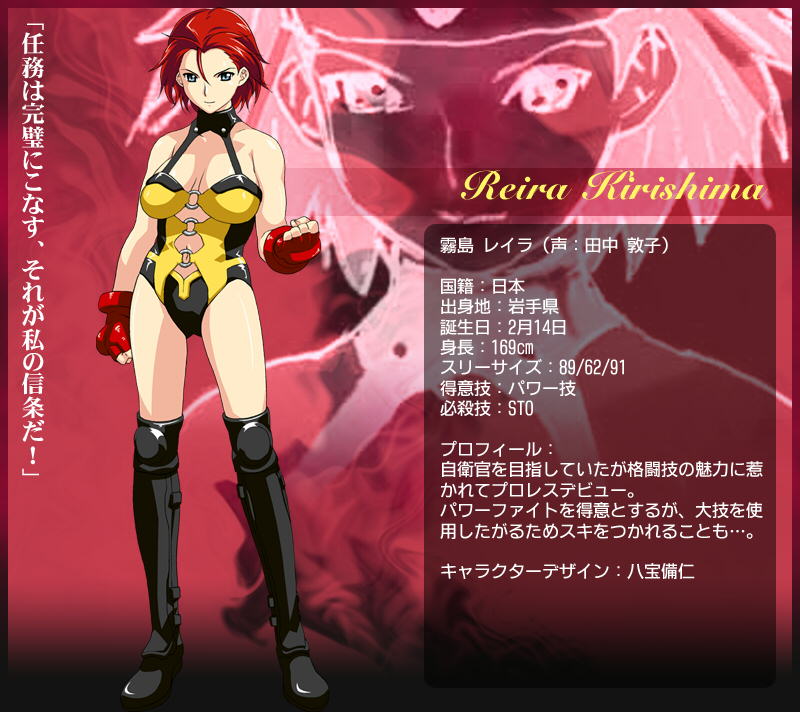 Reira's theme played, the redhead champion coming out in casual attire of a shirt and jeans, title belt on her shoulder, standing on the entrance ramp as she looked at the sold out crowd, raising the microphone in her hand.

"Well, what a sorry bunch of bastards you all are. See, when I heard about this little show being put on, I cashed in on my contracted time off stipulation. So enjoy whatever you get, because the Tension Champion has THE NIGHT OFF!"

The crowd booed loudly, not enjoying the realization they wouldn't get to see anyone take the belt off of Reira tonight.

"So you don't get to see the awesome champion defend her belt against some scrub, so what DO you get? Well, you idiots get to see a couple sissy gay boys, one of them I beat for this very belt mind you, have a little cock sucking contest. Some tough guy he is, he goes from getting his ass kicked to getting fucked by whatever little bitch boy he's fighting tonight!

What else, what else...oh yeah, that idiot cowboy Gastin, I remember last seeing him get tossed out of the ring in a battle royale, the scarping off to Friction to get beat up over there a few times. Now he's back in Tension to get beat up by another girl, this one being that dumb little tart from over the border holding some dumb low rent Hardcore belt. Whatever. She's as worthless as our tag champs. News flash folks, there's only belt in Tension that matters, and I'M HOLDING IT!"

She yelled, holding her belt up high for all to see.

"Oh, speaking of losers, that Domino, the loser that couldn't take my belt from me? He's wrestling tonight, against...I dunno, some bitch I've never heard of. Talk about a step down. At least last time he got to lose to the champ!

Oh this is good! The Valkyries, finally, some bitches I can actually relate too, are going to completely MURDER some jobber bitch named Blaise, some little poser named Amy, and some other girl I've never heard of, meanwhile our worthless tag team "champs" defend against some nobody and the only Kamiya more worthless than that idiot Tai."

She shook her head, sighing and shrugging.

"I really feel bad for you people, you don't get so much as a single entertaining match...oh wait, I forgot the main event, you guys get to watch Johnny Parker, best known for being married to that mental case Taylor Parker, you know, the girl who spent years acting like everyone else was beneath, then got beat down by a couple Friction nobody's and lost her belt to KELLY, the girl who even fucking CLYDE could beat up!? I heard she's backstage with her wife Johnny right now. Hey Taylor! When you're little arm heals up, how bout coming back to visit Tension and I'll personally show you how a REAL Champion defends her belt! Sure, it'll be months before you get the balls to get in a ring again, but I'll still be right here on top!"

"...Where was I...lost my train of thought...OH! That's right, you all get to watch Johnny Parker and Killer Kitty, everyone's favorite serial rapist and child abuser...I mean seriously, have you SEEN the girls he prefers to fight? We get to see both of them murder the everloving shit out of each other.

Look Johnny, I think you're a pussy and you're husbands a little bitch, but after you're done blowing Taylor, from one girl to another, I really do hope you murder that worthless kitten before he murder's you, because at this point, even I'm sick of the bastard!

So that's whats in store for you fuckers tonight! I say for you, not me, because I get to leave now and actually do something worthwhile instead of watching a bunch of losers! But before I go, let me introduce someone. Someone who, unlike Frictions manager Lukretia, is content to work in the back, and NOT try to make herself the biggest star of her own show! Ladies and Gentlemen: The Leader of the Thorns of a Rose, and the GM of Tension: Miss Sellers!"