Yvette instantly noticed how Neggy was closing the distance quickly. If she wasn't careful, Neggy might just charge into her. Sadly, that was what she did, charging rather rapidly forward and throwing her right fist forward. Thankfully, once more Yvette was equipped to deal with it. Pushing her body to the right, she would serve around the punch, trying to make an opening by throwing a left hook towards Neggy's upper ribcage. It was a risk, staying close to Neggy after throwing a punch, but now it was all about risks. She would have to rely on her wits to try and doge Neggy now.
_________________
That Foe list is growing bigger by the day!

Neggy wise up to what she was doing and knew her bad habits wouldn't die. Neggy shift to her right and made the punch gaze her ribs. Neggy knew her strategy was working to perfection. Neggy came in countering with a wicked a left hook to the temple. She follows up with a right uppercut to the solar plexus and then another left hook to cheek this time.* 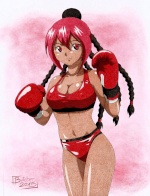 For Yvette it seemed luck was running out. Neggy was proving to be unhittable now. So far the match hadn't gone her way. Neggy's super weight advantage made her punches feel like they could break her skull. Before Yvette could do anything, A cruel left hook hit her right in the face. The punch could of pretty much killed her. More sweat and spittle went flying, her head snapped back as blood jumped from her mouth. She fell down to. Right onto the floor. She was lucky in one respect, as it gave Yvette some protection from the other shots.

Yvette didn't wanna get up. Her face hurt, her face hurt a lot. The blood she could feel form in her mouth just made it worse. But she couldn't quit yet. Not at round three. She had to go on longer. So half way through the countout, Yvette began to stand. This was it. She looked pissed as she got up. Her pretty much black now, except for her right cheek, but she had a feeling Neggy would correct that soon. Once the ref was ready, the round started again, and Yvette raised her gloves to protect her face. She needed to avoid another face blow.
_________________
That Foe list is growing bigger by the day!

Neggy almost got tied up in the ropes with the other punches missing. As the ref back off to give Yvette the count. She saw how busted up she was getting. She also noted how mad she was getting too. Neggy wasn't going to slow down though. Neggy put her gloves up too and came at her slower this time looking to take her time. She didn't want to end the fight yet.
_________________
The ponies will be back.

Her head hurt. It really hurt. Her mind was throbbing, her vision blurred as her eyes struggled to focus from the hit to the temple. It seemed as if it was going to be up very soon. Neggy started to come back at her, but didn't attack. Instead Yvette decided to go on the attack, throwing a right hook into Neggys midsection. If it worked, Yvette would apply some pressure throwing a left- right jab combo directly into Neggy's face. It might not be a lot, but Yvette was going to go down, she was going to go down fighting.
_________________
That Foe list is growing bigger by the day!

Neggy saw the right hook as she moved in. She didn't want this to be a total blowout so she actually let the punch. Besides the last right hook didn't hurt her. Neggy braces for impact grunts as the gold glove found her midsection. She sees her try to follow up after landing said punch. Neggy wasn't stun ro stagger but she did feel the punch.

Neggy would step up and throw a quick right straight to the nose in an attempt to stop her followup. If it land she would follow up with a left cross looking to see if she can finish the fight this round.
_________________
The ponies will be back.

It seemed as if Neggy was almost pitying her. She didn't make an active attempt to block or avoid the hook. She just took it. Grunted and that was it, not staggered or knocked back in anyway. In a fit of anger, Yvette put more power into her follow up punches, however that was short lived as Neggy beat her to it an managed to fire off a punch right into the nose. Usually after a Neggy punch, Yvette would stagger, but this time, maybe due to the amount of hits she had taken, she didn't stagger herself, her head snapped back, nose broken as blood dripped rather heavily from it this time.

The other punch to the face had the exact same effect. Send her face, blood sweat and spittle, flying to the side, but her body did not move. In one way it was incredible. Her endurance had finally kicked in, and maybe there was a bit of hope. In an attempt to try and get the last punch in, Yvette would fire off a left uppercut into Neggy's gut, followed by her own right hook into Neggy's nose.
_________________
That Foe list is growing bigger by the day!

Neggy heard that crack when her right straight landed. She was impress she just stood there and took it. It seems the crazy amount of stamina Neggy study up on was kicking in. Neggy saw her go for an uppercut and this time was away to move back and avoid it. She goes to counter with her trademark right cross to the jaw as she willingly took a right hook to the nose looking to finish the fight and win by KO. Neggy grunts as the gold glove made contact with her nose.
_________________
The ponies will be back.

Yvette managed to get Neggy in the nose, however it wasn't enough. It didn't have anywhere near the weight needed to break her nose. Before Yvette could do anything else though, a fist came in a smashed into her jaw, with more power than ever before. The force of the punch forced spittle, blood and sweat to fly, as her head went to the side, her mouth piece leapt out of her mouth. She began to head for the floor, and by the time she hit the canvas, she was out cold.

The ref would come in and look, and seconds later would declare that Neggy had won by KO. Not that anyone had been expecting anything different.
_________________
That Foe list is growing bigger by the day!