Style: Submission/Humiliation/Dirty
Strategy: Traci often tries to use her cute looks or friendliness to lower her opponent's guard before going for a cheap shot.  From there she attacks fiercely and relentlessly, attempting to overwhelm her foe with her myriad of submission holds.  A bit of a closet sadist, she favors more humiliating holds, and will use whatever underhanded tactics she can to try and break her opponent's spirit.  Weak on the defensive end, she tends to overexaggerate her pain or play possum, or sometimes even fake apologize, in order to create openings for her to take advantage of. 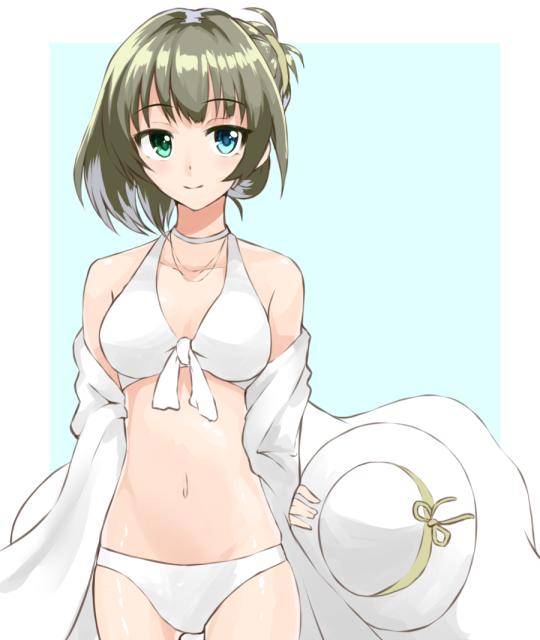 Personality:
Cute, friendly, and patient, Traci almost seems like the kind of person who doesn't belong in something like the AFW at all.  Highly charismatic, she has a good innate sense of how to deal with different kinds of people, although more often than not she uses that gift towards evil ends.  Beneath her nearly unbreakable good girl mask, lies the heart of a sadist.  Not so much physical pain, but more so humiliating other girls as deeply is what truly excites her the most, although it would be nearly impossible to tell that by looking at her face.  She could be completely destroying a girl and that friendly smile of hers would not change a bit.  Even those that might have faced her or seen her matches might let their guard down outside of the ring, but even then sometimes they are still not safe.

Somewhat used to insults and such, Traci is almost always composed and near impossible to anger or provoke.  Though she is very perceptive of people, she can be blind towards other who put up similar acts like hers, since she is rather desensitized towards it.  Also, she often falls for faking embarrassment or begging for mercy acts, since such things trigger her sadistic side.

Past/History:
Growing up in northern California, even at a young age, Traci was quite the star.  Athletically talented, solid academics, and highly charismatic, she always highly praised by both her teachers and peers.  By high school she even had insanely good looks to add to that, and was widely agreed to be the hottest girl in the school.  She dated almost all of the popular boys, and even maintained a friendly relationship with them afterwards.

Of course, success never comes with out some resentment.  No matter what Traci did, there was always that one pack of catty, envious girls who felt upstaged by her constantly and hated the girl for it.  At one point near the end of her junior year in high school, a particularly ill-mannered group called Traci out to a secluded location, intending to teach her a lesson.  As soon as she arrived, all three of them jumped her, however, despite never having been in such a situation before, Traci managed to fend off all of them, slowly taking them out one by one and even stripping them naked.  They never messed with her again.

It came with a strange feeling of excitement.  Something definitely had awoken inside her that day, but Traci was all but unphased.  Naturally, nobody believed she was capable of what she had done, and she even demolished another groups of girls who tried similar stunt in her senior year.  Though she had hoped a few more might come after her, Traci stayed cool and collected, still having to sense to keep her new so-called hobby to a minimum, remaining "Miss Perfect" to everyone but her handful of victims.

Though her options were many, show business seemed the most natural fit for a girl like Traci, and she was able to quickly get into the industry shortly after graduating high school, moving down to Southern California.  She worked numerous minor roles, growing popularity before she suddenly took up a long-term contract with a pro-wrestling promotion.  Feeling a slight itch in the sadistic part of her brain, Traci easily negotiated some creative control on her end and was able to get the role of a vicious heel.  Even if it was scripted, just playing the part was still refreshing after such a long break since her last prey.  Of course the many people that knew her were quite surprised at her character, though it was easy to shrug off due to Traci's acting talent.

After some time there, through all her training and practice Traci began to enjoy wrestling itself, rather than just a means to an end.  As soon as her contract was up, she hopped over to a smaller promotion, one that was a lot less scripted.  Her manager certainly didn't like the pay cut, though Traci very much enjoyed the greater freedoms granted to her in her matches.  Slowly coming to realize his client's 'interests', her manager proposed a big gamble: the AFW.  There was near absolute freedom, though quite dangerous as a result, and was a lot more lucrative than what they had going on now.  She hadn't heard of it before, but as soon as she learned about it, Traci was completely on board.  With Traci's looks and experience, getting in was literally no trouble at all for her.  Referred over to a new manager over in Japan, Traci packed her bags and set out to enjoy her new job.

Fun Facts:
-Though she's straight, Traci has no qualms getting sensual with another girl if it means distracting them or lowering their guard.
-Her friends and family have pretty much accepted her choice in career, although just about all of them still believe her sadistic habits to just be an act.
-The only known thing so far that can break Traci's composure is getting stripped and/or humiliated herself.
-She usually dislikes rematches, in part due to some of her tricks being less effective, and also humiliating someone a second time is not as exciting to her.