Search
Latest topics
» Acrobat against Giantess part 2: the gym encounter!
by Ringropes98 Today at 2:10 am

Wrestling Information
Strategy: Leysritt is trained wrestling style of Lucha Libre. She normally wants to put her opponent where she wants them to be at the exact time to hit them up with a high flying move from the ropes or turnbuckle. Seemingly if that doesn't work she'll go with her strength while resorting into grapples to make them submit.

AFW Information:
Personality: She has a thing ego, regardless of it; she developed a sense of reason due to her time alone as she didn't spend much time with other children her age other then her younger twin sister. As a result, Leysritt often says what she thinks without any consideration and this gets her often into a verbal conflict with her sister.

She and her younger siblings are actually very close friends and would die to protect each other as well. In contrast to other people's personality, she possesses a casual personality but has difficulty expressing her emotions and comes across as robotic at times. However, she appears to enjoy teasing others and also takes a liking to some if their presence which makes her happy while being rather easygoing as well.

Bio
Leysritt was born with her younger twin sister into a noble house in Germany on July 7th of 1997, but she was born Albino; making her unable to stay in the sun for too long and being the first daughter they had with her twin sister Sella, as a result she was homeschooled during most of her life. At the age of six she was taught the basic things how to read and such.

Upon the age of ten she was trained by her father in wrestling while being taught at the same time by her uncle in the ways of Lucha Libre. As he was a former Luchadore in his youth; developing strength through her training which was useful for tasks most men can't do.

On her sixteenth birthday her parents took her to a trip to Japan where she became a star for her looks and acting. Which starred her in a couple of tv shows and few movie. But later she would start to study abroad in Japan with her family in Germany still while working part-time as a maid and actress as well. Two years later she would graduate from her studies and join into the AFW to make use of her lessons she learned from her father and uncle. 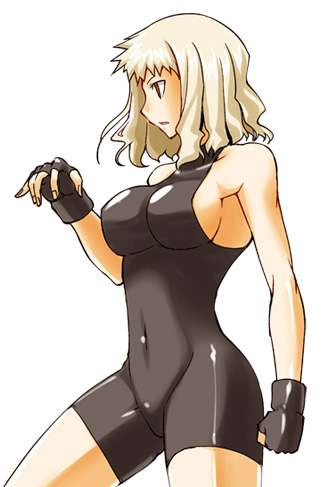 Re: Liz "The Bruiser"