Strategy: Cesba likes to use mind games to compensate for her lack of strength when she cannot use her spider arms. She will keep talking until she hits a nerve and plays that nerve. Cesba fights smart when not able to use those arms and only uses attacks that wear someone down very quickly.

With her spider arms, even she falls to the overconfident trait her race has. She will toy with her opponents physically and tease them in suggestive positions and holds. This is mostly due to her having such ability with them.

Powers: As an Arachniom, Cesba can create spider strings from her fingers and mouth. These strings are as strong as steel and can support up to a ton if Cesba has enough time to make the web correctly. Though these strings can be destroyed very easily by fire and will falter when wet. They also become brittle and breakable by hand when they dry out (takes a few hours).

Also as an Arachniom, Cesba is able to grow up to four spider-esque appendages from her back. Since they do not come from thin air and they are heavy, she herself is deceptively heavy, even for being so slim. The arms are very strong, and can support Cesba to act as a means of transportation.

Endurance: ★★ (Takes more energy to use all those arms)
Strength: ★★★★★ (4 more arms doubles strength)
Speed: ★★ (The heavy arms sow her down)
Defense: ★★★★ (She can definitely block those strikes with her arms)
Technique: ★★★★★ (So many arms make for some imaginative moves)

Bug Squasher: Once her opponent can barely or no longer fight back, Cesba wraps her opponent in her webs with a string holding them to her hand. She then swings them around and slams them all around the ring or wherever they are.

Love Web: Used mostly when Cesba is dominant for most of the match. She picks up her defeated opponent (either with her own hands or her spider arms) and cocoons them in her webs. She leaves them stuck in a corner until the web dries out and becomes brittle enough to break free from.


Personality: Cesba is very intrigued by the way normal society works, having to live under the Arachniom style of life for so long. Doing so however, made her almost unafraid to die rather than lose. Though she doesn’t seem like one to be so dangerous at first glance, Cesba manages to always be a surprise. Even to those who know her well. The spider can be overly kind, but not blind to someone taking advantage of her. And she will be quick to react about it. She speaks with long pauses and includes moans and purrs along with them. She claims this to be just because she is an Arachniom but hasn’t been proven.

Past/History: 99% of the Arachniom race live in the HomeForest, which is located in the Northwest of the Canadian wilderness. A forest made of vines, thorns, trees and other vegetation so thick that very little sunlight gets through. In the 1800’s, the race collaborated with the human race shortly after they discovered electricity. It was either reveal themselves or forever live in the darkness.

Forward to the 90’s, where Cesba was born to the world. From the start of her life, she had been an odd child. At least, as far as Arachniom children went. She wouldn’t eat her food unless it was cooked; already going against the cannibalistic ways of her race. She liked to talk more than fight; every one of her race would proudly die for their Queen. She became a bit of an outcast when she was entering her teenage years. By this time, like all Arachniom children, she was to leave her parents and begin her schooling on how to better serve the Queen. She did not.

She lived at home with her parents and began studying to be a master chef. No one really saw wrong of it, they just saw it as odd. In fact, it caught the attention of the Queen. Reclusia. She called for Cesba to become a part of her Royal Guard and live in her castle as a chef, as Cesba discovered that the Queen also liked the taste of cooked meats. Cesba could not refuse the offer, as to not offend the Queen. She took special training on how to defend herself and Reclusia during attack. As a member of the Royal Guard, her training was specially designed to keep herself alive as well, since she wasn’t so disposable.

For years, Cesba cooked for Reclusia. Whatever prey the Queen wanted her to prepare for her. Humans, Farfallia, and even a Draca once. Although she wasn’t comfortable with cooking other races, Cesba figured that it was okay since they were already dead. In those years, her skill for cooking grew more than her skill of fighting. And one day, that would be a major problem…

The Queen wanted a human meal one night. What Cesba didn’t know when the other Royal Guard members brought the ingredients, was that he was still alive. A human male who was bound by the hands. Her instructions were to somehow season him while he was alive and she was to personally bring him to Reclusia’s room. They claimed that Reclusia wondered if fresh human was better than one preserved for a day.

Not being able to bring herself to killing him without it being in self-defense, Cesba couldn’t do it. She began to talk to the man, who was dead set on killing Reclusia. As much as Cesba didn’t like the idea of it, she made the decision to let him go. 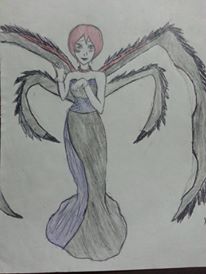 -Though she looks petite, Cesba’s weight is attributed to the extra spider appendages that can protrude from her back. Each weighing about 20 pounds. Even if they aren’t out, they’re still there.
-Is an excellent cook.
-Though she isn’t a cannibal or eats other races, she does enjoy normal meat-foods. (I.e. Burgers, steaks, ect.)
-Doesn’t follow the normality of her race. She isn’t always sex-crazed or cannibalistic.