Name: Alicia Wells
Sex: Female
Age: 21
Eyes: Purple
Hair: Red
Height: 5’10”
Weight: 160 lbs
Nationality: UK
Alignment: Heel
Entrance music: None - Alicia's entrance doesn't have any music. The lights just go down and, when they come back up, she's standing in the middle of the ring.

Strategy: Alicia’s strategy is pretty simple. Her best weapons are her legs, so her standing game focuses on powerful kicks. If things go to the ground, she goes for any form of scissors – head or body – and applies full pressure. She prefers to end fights as fast as she can, by knockout if possible, though taps are fine by her as well.
Style: Aggressive, Brutal, Hard-Hitting
Type: Kick/Scissor Specialist

Endurance: ★★★ – She’s about as tough as should be expected, with impressive endurance.
Strength: ★★★★ – Alicia’s legs are monstrously strong for her size and build and her arms aren’t to be sneezed at either. She’s knocked bigger guys out with a single kick before.
Speed: ★★★★ – Whether on her feet or the mat, Alicia is both quick and nimble with above average reflexes.
Defense: ★★★ – A mixed bag. Her standing defence is good, she knows how to defend scissors but she relies on instinct against more elaborate locks.
Technique: ★★★ – Alicia is superbly skilled in her particular fields – kickboxing and scissors – but decidedly lacking in more varied submission holds.

Finishing moves:
‘End of all Hope’ – Alicia sits behind her opponent and applies a bodyscissors and a full nelson.

‘Wingbreaker’ – Locking her legs around her opponent’s torso in a body triangle, Alicia
applies a Kimura to their arm and applies pressure to both holds.

‘Lights Out’ – A straight roundhouse kick to the head.

Alicia in battle gear, courtesy of a very good friend. 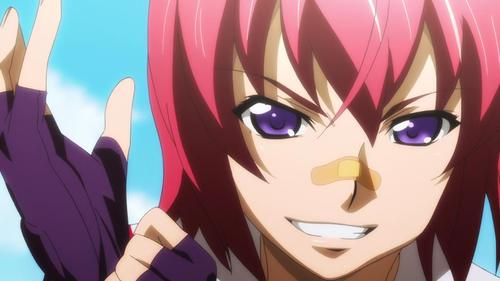 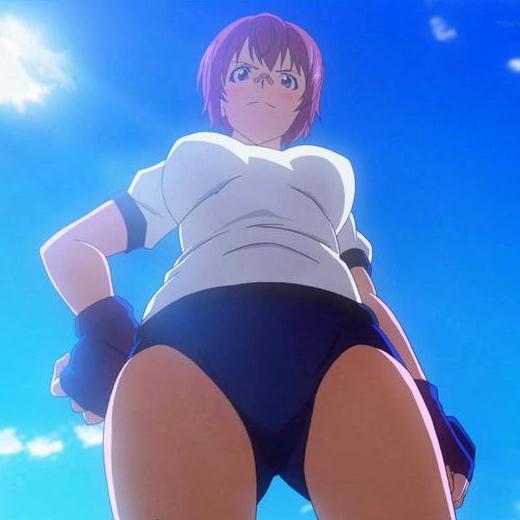 After a disappointingly easy win.

Having a much needed drink after a match - GIF.

Her favourite way of ending a match is any form of knockout. That said, if she doesn’t like someone, she likes getting them in a scissorhold and forcing them to tap out on her thighs. Or, though it’s not really her thing, smothering her opponent out with her breasts to add to the humiliation. Still, it’s probably also telling that her favourite memory of school is that time she taunted an older boy into a fight and left him with cracked ribs.

The disturbing part is usually how cheerful she is about the whole thing. As noted above, Alicia loves to fight and she has a nasty smirk when she’s doing it. She hates to be looked down upon, she also hates anyone who throws a fight and will challenge anyone who she feels didn’t give the fight their all to a rematch.

Alicia is also pretty smart for someone who tends to be pegged as a dumb bruiser. With an undergraduate degree under her belt and a Masters’ in progress, she’s sharp as a razor. Treating her as dumb muscle is another way to get her angry. Her temper is distinctly on the fiery side but it burns hot and fast and, once she’s punched the offender in the face, that’s generally that as far as she’s concerned. Grudges generally aren’t her style.

Past/History:
Born in London, Alicia was a combative child from an early age. She was always the one responsible for starting fights but usually for ending them as well, despite being the younger sibling. Looking to help her burn off energy, her parents enrolled her in dance classes but it wasn’t until she was signed up for kickboxing and MMA lessons that Alicia seemed to settle down a bit.

That was much more her speed and everyone breathed a sigh of relief when she stopped picking fights with her siblings. Smart and aggressive, kickboxing and MMA suited her way more with letting her hurt other people and she didn’t have a problem with the rules placed on her in training. She didn’t like her parents’ refusal to let her compete on the team though, and that was at the root of a lot of her issues.

Despite her training, she still had a distinct reputation around the neighbourhood throughout her youth for being a troublemaker who loved to stir up problems. At school, the same held although she was also well-known for her prowess as a runner and gymnast as well as her academic prowess. Though she was never top, she was definitely much more intelligent than her peers gave her credit for. It was while she was at school that an older friend first introduced her to the scissors and Alicia took to it with ease, her impressive lower body strength making it hard for her ‘opponents’ to take.

After finishing at school, Alicia went on to study history at university where she added wrestling to her studies. Once she finished her degree, joining a promotion seemed the natural way forward and she found herself in the AFW not long ago.

Fun Facts:
- Alicia is doing a part-time MA on the later Roman Republic and loves reading about history in general.
- She hates carrots, will not eat them and will do her best to end anyone who calls her Carrot or anything like it.
- She is always to be found wearing fingerless MMA gloves.
- Alicia is on a dating website but generally only uses it to find 'sparring partners' for when she needs to blow off steam. Meaning she takes them home and demolishes them after they agree to wrestle her.

Timeline:
1. Crash Course (Complete)
Alicia's introduction to the AFW via a sparring match with Valley Doll that seems likely to lead to a rematch down the road.
2. A Needed Change of Pace (Complete)
Alicia meets Kyoko Aran, they spar and test each other's endurance. No, not like that...
3. Hitting the Books (Complete)
Waiting for her first match, Alicia meets a Friction veteran.
4. Alicia vs Gallium Heart - Alicia wins via End of All Hope
Alicia's debut match in Friction against Silver Ace's protege, Gallium Heart. Spoiler - it doesn't go well for Gallium.
5. Heart to Heart (Complete)
In the aftermath of her match with Gallium, Alicia and Valley have words about her actions.
6. Alicia vs Jesse Rogers - Alicia wins via knockout (kick to the head)
Alicia's second match, this time against a fellow striker.
7. This Seems Familiar
Running across a blonde with an equally dangerous pair of legs, Alicia quickly makes a friend and shows off a bit.
8. Alicia vs Valley Doll – Valley wins by pinfall
In the wake of her words with Valley, the two face off in a hard fought match. Alicia’s inexperience comes back to bite her and Valley scores the win.
9. Seeing Red
Alicia finds her new friend in trouble with some sore losers and pitches in to help.
10. Abattoir vs Alicia vs Liberty – Alicia wins via Scorpion Rib Crush (Abattoir)
In her first triple threat match that happens to also be her first hardcore match, the Scissor Queen manages to pull out a win, not least because the other two were mostly interested in hitting each other.
11. Come Into My Parlour (Complete)
Said the Spider to the Fly, where Alicia is the spider and Dmitri is very much the fly.
12. Alicia and Mikayla vs the Won Siblings
After the scuffle with the trainers, Alicia and Mikayla finds themselves put into a tag match with the infamous Won Sisters. It’s meant to be punishment for them but, with the newbies in a bad mood, things might not go as expected.
13. Mutual Intrigue
Trying out gyms in the area, Alicia runs into Akino Sanada and makes a new friend.
14. Tokyo Blues (Complete)
In which Alicia hangs out with a fellow historian, (possibly) makes a new friend and sets up a sparring session.
15. Anything You Can Do (Complete)
Alicia can do better. Or, in which her continuing search for a gym leads her to the Rodriguez gym, stomping one of the trainees flat and then tangling with Army. Not to mention setting up future fights with Carmen and a date with Army to finish what they’ve started…
16. Hammer and Tongs
Later that night, Alicia takes on Army again, this time without an audience (they think).
17. New Challenger, New Challenge (Complete)
After winning the triple threat match, Alicia finds out that she’s now the number one contender for the Hardcore Title. Yay?
18. Big Time (Complete)
While working out, Alicia sounds Valley Doll out on Adrian Kytes.
19. Bulk Up! Skill Up!
The Northern Queen and the Scissor Queen’s first sparring session and things get intense. Naturally.
20. Helvetica’s Hotseat
Before heading off to Alaska for the PPV, Alicia sits down with the self-proclaimed “Student of the Game” to talk about her time in AFW so far, her plans for the future and who names their daughter after a long dead Gallic tribe anyway?
21. Gallium Heart vs River Styx (Complete)
Much to everyone's surprise, Alicia runs in to save Gallium from being paralysed by the sinister Styx. Said individual seems to take this poorly.
22. Alicia vs Adrian Kytes (Lion’s Den match for the Hardcore Title) Adrian wins via knockout (Super Kick)
Alicia goes up against Adrian for the belt – with the stipulation seemingly playing to the challenger’s strengths, who will prevail?
23. Alicia vs Nobu Tano
In Alicia’s debut match in Tension, she goes up against the local trickster.
24. Test of Strength
Alicia goes up against the famous Odessa Brock in a series of tests of strength as the two amazonian Brits get to know each other.
25. Alicia Wells vs Kyoko Akan
Clearing up a bit of unfinished business.
26. It Shall Not Come to Pass
... Damn it, River!