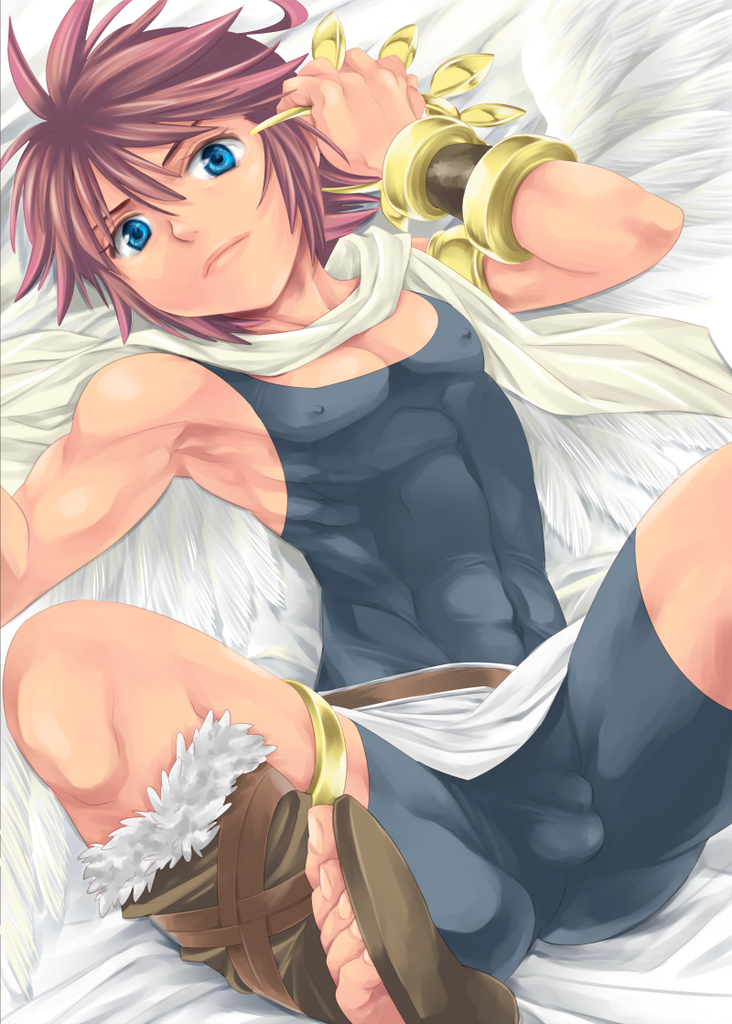 Wrestling Attire: Dabriel wears a pair of dark tight-fitting shorts that extend to his thighs. He leaves himself shirtless while wearing brown leather boots that reveal his toes.

Style: As an angel, Dabriel has some knowledge of aerial techniques that he tries to incorporate into his wrestling. After that, his other techniques tend to be involve speed or submission moves.
Preferred Matches: Mostly anything standard, but also enjoys best of 3 matches. (despite rarely ever getting his own score during these ones.)

Favoured Moves: Splashes, Leg Drops, Camel Clutches, DDTs
Finisher: Dabriel has yet to come up with a finishing move. Not like he's ever been in the position of winning!

History: Dabriel is a young angel hailing from an angelic tribe nestled in the clouds of a dimension separate from AFWRPG. Said tribe is incredibly isolated and has always been happiest this way, but growing up this curious angel only become more intrigued about life beyond his peaceful hamlet. The angels of his tribe are pacifists and so nearly all of them have a calm, serene living. But to Dabriel, this was the epitome of boredom. He craved some kind of excitement, something new and different in his surroundings. Of course, the other members of his tribe regarded this as nonsense. But Dabriel disregarded their concerns and instead began to explore beyond the cloud realm.

Eventually, he came across the sport of wrestling in other dimensions. The thrills of the audience, the tremors that echoed around the arena as wrestlers slammed each other into the ground, it drove him wild! And he soon decided to take part in it himself. Though his training was diligent, his general inexperience of any kind of combat, not to mention a short and small body, meant his first couple of matches were completely failures on his part. But he soon heard of AFWRPG and learned of the many types of wrestlers it attracted. Eager to gain more experience and develop his skills, Dabriel quickly decided to join the league.

...It may be a while before he reaches the point that he's an equal in the ring, however.

Personality: Dabriel is a very spirited and eager young angel. He's positively bursting with energy and pluckiness, always getting back up even against the toughest of situations. His smile is also very persistent, which some find irritating. He can be quite naïve however and blind to the fact that he's totally out-matched against a foe. Not to mention incredibly trustworthy and polite...which is another aspect people tend to take advantage of. He'll often leave people alone during a match if they're on the mat or release a submission instead of pushing for a tap. He gets very easily flustered when people hit on him and often has no idea how to react.

RP Hooks:
In case it isn't totally obvious, Dabriel is very ideal to RP with if you want a squash match, with say a heel of some kind. People who have an interest and like/dislike of angels may also find good reason to interact with him. Those who like to train other wrestlers may want to impart some of their wisdom on him too.

Misc Info:
-Dabriel's wings are far from fragile, and are in fact made of bone and blood. They are still very feathery, of course.
-While Dabriel does indeed want to get better at wrestling, he admits he enjoys the excitement of a fight more than winning or losing.
-Dabriel will never cheat. Ever. Even if his foe does, because he hates stooping down to such a low level.

Just letting you know there's no need to approve FnF characters. If you make a Friction/Tension/Momentum character, then that character would be approved.
_________________
Ask for a name change at your own risk!