» NWO Ladies Vs 'butlers'
by wrestleryu Yesterday at 11:27 pm

» The Lost Adventurer
by Nelv Yesterday at 11:22 pm

Home Is Where the Hatred Is

Clyde only smirked when Lilly grabbed his arm and shouted. He saw it coming and it was glorious!

"I never said I was going to Mercy's house!" He said with a finger raised and a proud smile as he gave Lilly's cheek a condescending pat.

"I'm not gonna let you hurt her today or tomorrow. So, we'll find things out from neutral ground... Well... I'll find things out. You'll be lucky if you don't get arrested for causing interference in an AFW title match! Clyde said as he stuck his tongue out at Lilly before making his way into AFW HQ, going past the double doors and walking into the big building and immediately going up to the elevator. He didn't say a word to Lilly, but he felt a little uneasy being alone in an elevator with her.

Lilly was livid. He tricked her, and ow he was gloating about it! He had a lot of balls. And she planned on removing them for this. And patting her head only made her angrier. He was going to suffer for this.

But all she could do was grit her teeth. Clyde, once again, threatened to get her arrested. This time, for interfering with Kelly's match. She wasn't technically an employee of AFW anymore, so what she did wasn't exactly legal. And Now Clyde was holding that over the cheerleader's head. What could she do? She didn't want to give him any reason to have them call the cops on her. So she just followed him into the building, face red, and fists clenched at her side.

Lilly didn't say anything the entire time the two were in the elevator. She just glared at him, knowing that he could get her into a lot of trouble. She hated that she had this on her. And she honestly didn't think he was the kind of person to commit blackmail. He had some nerve...

Finally the elevator doors opened and Clyde stepped through, walking into a office where a woman with rose red hair was sitting, clacking away at a computer.

"Howdy." He said with a big smile as the woman looked up and grinned widely in surprise. 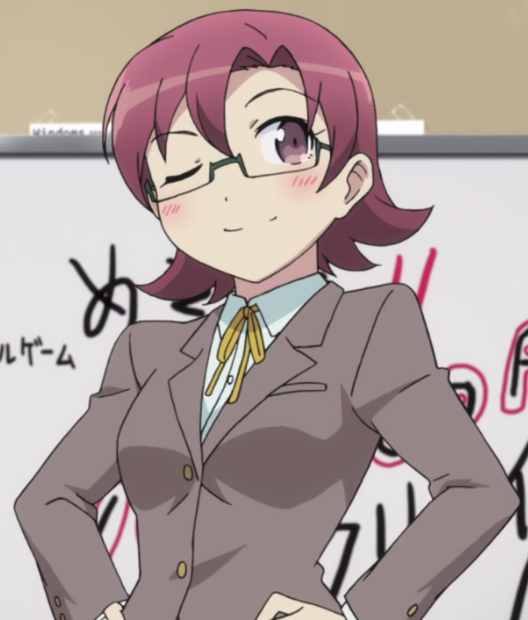 "Clyde Gastin! What. A. Surprise!" Cried the young woman before spotted Lilly behind him. "I-Is that... Cheerleader Lilly!? She gasped as he looked at the two blondes that were bitter enemies.

Lilly followed closely behind the pain in the ass cowboy as they stepped out of the elevator. She had been here before, a long time back now. Come to think of it, it was the first time she had met Mercy. The memory of it just made her mad, knowing she might be here, intent on keepingher from getting her job back.

When the two of them entered an office, Lilly spotted the pink hair, and her first instinct was to charge. But... it wasn't Mercy.

Lilly stared in confusion at the Pinkette who was bouncing in her chair like a child. When the girl noticed her, Lilly only rolled her eyes. Of course she knew who she was. Who didn't? And then the girl went off on a tangent about her fan fics and what not. Lilly grinned. This was as good a chance as any to embarass Clyde.

Lilly walked up to Clyde and wrapped her arms around one of his, smiling an innocent smile at Chloe. "Oh, don't listen to him! He can't get enough of me! I mean, just today, he snuck in the shower while I was in there and just had his way with me! Can you believe him! Such a perv." she said, casting a sidelong, taunting glance at Clyde. She hoped Mercy was here. This Chloe girl just screamed gossip.
_________________

Clyde's eyes shot wide when Lilly wrapped her arms around one of his and just poured the gasoline on the small fire Chloe made...

"What!? Oh hell n-! That ain't how it...!" Clyde protested, glaring and gritting his teeth at Lilly as he tried to deny her words but bitterly, he knew she was right. He did chase her down in the shower. She won this round.

"Knock it off." Clyde grumbled as he shook Lilly off before going over to Chloe.

"Chloe... I need to talk with Mercy but I'd like ya ta' try and reach her." Said Clyde before Chloe shook her head.

"I haven't been able to reach her myself actually. She won a match against a... 'Trixie Lasek' about a day or two ago and I called to congratulate her but her phone instantly goes to voicemail." Trixie admitted with a slight frown, even she was worried about her 'Work BFF'.

"But she's still in Japan?" Clyde asked and Chloe nodded. "Should be. I mean, she just won twenty grand." Said Chloe before she looked at Clyde and smiled devilishly. "You could always try..." Clyde said as she bit her lip while Clyde furrowed his brow. He didn't want to go.

"Fine." He said before Chloe scribbled something down for Clyde and he was off, passing up Lilly and hurrying to the elevator to go down it. He didn't wait for Lilly and didn't really speak to her as he hurried to a very rich looking apartment complex...

"Here we are. You can leave now if ya want... I don't know if Brittany Luuve wont kick your ass for what ya did in her match." Clyde warned before walking forward.
_________________
Friction: Kelly Conway Zipporah Amos Boudreaux "THE Cyclops"  Bonnie Gastin Andrea Umlaut White Mamba  Trixie Lasek

Lilly grinned that grin she knew he hated when he glared at her. This is what he got for blackmailing her. If he wanted to make her worried she'd be arrested, then she'd spread the word around that he and her had sex. At least then, word would reach Mercy eventually. And she'd hate him for it. Serves him right.

She let go of him when he tried to shake her off. "Oh, he's just being shy because he wanted to keep it a secret," said the cheerleader before stepping away from him, watching the exchange between the two.

Hearing that Mercy won another match burned Lilly. She couldn't believe that she was capable of another win. Probbly a fluke too. Mercy wasn't that good of a fighter, so that was definitely how it had to go down.

But it was even more of a shock to hear that no one seemed to be able to get in touch with her. Why would she not answer her phone? She was a corporate girl for god sake. Should she always answer her phone?

"Try? Try what? What's she talking about?" Lilly asked when Chloe trailed off. Clyd seemed to know exactly what she was talking about. And when he hurried off, she wasn't far behind. She wanted answers. "Where are we going now?!" It irritated her that he refused to give her a straight answer. What did she have to do?!

Clyde wasted no time, and he didn't wait for her. Lilly had to basically jog to keep up with him as he went. When he finally stopped, they were in front of a very, very extravagant appartment complex. Now this was the kind of place Lilly was used to.

"Brittany Luvve? The chick who beat Kelly?" Lilly was suddenly very worried about going inside. She wasn't ashamed to admit that Kelly was the better fighter of the two of them. And if Kelly couldn't beat Brittany, then she sure as hell couldn't. She shook her head though. She refused to be intimidated. She had to know if Mercy was still around!

"I'm not leaving. And you're going to make sure she stays off of me, or I swear I'll tell everyone from here to hell that you and I were having sex behind Mercy's back." Lilly knew she didn't have much leverage, considering he could get her arrested if he wanted to. But she wasn't going to let that intimidate her.
_________________