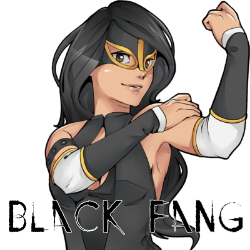 Ryoko believes that a true wrestler shouldn’t limit her options in the ring, but try to master all aspects of the craft - instead of focusing on any one aspect of wrestling, she’s trained in all of them to decent degrees. She’s decent at high-flying, good at technical wrestling, has a fair array of submissions to work with, and is strong enough to execute power moves against all but the heftiest opponents.

This is both her greatest weakness and strength. Her jack-of-all-trades style of wrestling means she can exploit any opponent’s failing - she can be fast enough to outpace slow opponents, technical enough to befuddle brawlers, and so on. It does mean that she needs to fight on her own terms, however. Against an opponent with great grappling skill, she’ll be outpaced, against someone with expertise in striking, she’ll be outboxed, and so forth and so on.

Willing to try just about anything.

Endurance:★★★ - Is quite a bit tougher than she looks.
Strength:★★★- Has enough power to lift most people up for her suplexes.
Speed:★★★ - Moves well around the ring.
Defense:★★★ - Blocks well, can anticipate most orthodox moves.
Technique:★★★ - Has a good array of classic wrestling moves to utilize in combat.

Strikes: ★★★ -Wears on her opponents with chop, elbows, knees and the occasional headbutt.
Submissions: ★★★ - Utilizes many wrestling mainstays, like the figure-four leg lock and the Sharpshooter.
Powerhouse:★★★-Has a nice supply of suplexes and powerbombs to choose from.
Aerial: ★★★ - Can work well with the ropes.
Counters: ★★★ - Is familiar enough with most moves to counter them effectively.

On a stunned and kneeling opponent, Ryoko brings her leg up like she’s going for a high roundhouse. Instead, she twists around and bring the kick downwards as she pivots, getting some extra torque into the move and hitting them from a weird angle.

With an opponent stunned and sitting, Kim runs to the ropes, bounces off the turnbuckle, comes back, leaps and lands on their chest with both knees. While hard to set up and connect with, the way it hits allows for such an immediate pin that it would be almost a guaranteed win. She can also get to it from different angles - for instance, when her opponents are sitting in the corner.

A somersault dropkick. With her opponent slowly rising, Ryoko makes her way to the top rope, flips forward as she leaps off, and plants both of her boots in her foe’s face for a hellacious dropkick.

Ryoko loves wrestling. Absolutely, totally, completely. She lives wrestling, she breathes it, she almost worships it. There’s very little about the wrestling scene she doesn’t know about and almost nothing she’s not willing to find out.

She also has a deep love for comic books and superheroes. Always first in line at the movies, always reading the trades, catching up with the latests new on Youtube, attending conventions and dressing up as her favorites (particularly Psylocke)

So it should come as no surprise that, as a wrestler, her persona is like something ripped straight out of her youth. Black Fang is a tireless soldier of justice, defender of the weak, and a champion of good. She comes down the ring with boundless energy and plays to the fan, doing everything in her power to draw them into the match. She’s the archetypical pro-wrestler: loud, boisterous, and rowdy when the camera is rolling.

Off camera, she’s mostly the same person, only less so. Her most notable trait is her wide-eyed optimism. She tries to see the best in any and all situations - winning is good, but even losing can be a learning experience. As long as she can gain something, anything is a victory, no matter how small.

Ryoko didn’t have a particularly interesting history - not at the start, anyway. She was born in Osaka, to a nurse and salaryman. Middle-class, decent school, a handful of friends. Nothing too mentionable.

Maybe that was why she so took to wrestling and comic books. She loved the adventure, the thrill of it all, and got wrapped up in the escapism. She could spend hours in her room reading through books and absorbing the lore, and she rarely missed a single televised show.

She had many heroes and heroines, but one of the biggest was a female wrestler by the name of Asami Kusanagi.

Ryoko would spend many hours pretending to be Asami and memorizing her moves and matches, even imitating them on the trampoline with her cousins. Which she shouldn’t have done. Because she injured herself. Twice.

She had dreams and she wanted to realize them. After school, she went straight into wrestling and tried her hand at it, but didn’t get very far. She had the charisma, but not the talent, and try as she might, things were hitting a dead end.

And then she met Asami Kusanagi, and everything changed.

It was at a convention where the two of them happened to have a booth near each other. Ryoko was, of course, nervous to see her childhood heroine in the flesh, but she worked up the nerve to come over. Asami could’ve just brushed her off, ignored, sent her away with autographed picture. She didn’t. The two of them talked and talked, and for whatever reason, Asami seemed to actually care about Ryoko was saying and took an interest in her career.

It started out as nothing more than tips exchanged over emails, then Asami would come visit her matches and give her direct advice, then they began training sessions together. At the end of the year, Ryoko was officially Asami’s student, and began taking in all the knowledge her master could impart.

Now, two years later, Ryoko has taken up a new moniker, donned a mask, and is ready to hit a reset button on her career by joining the AFW, showing what she can do among the best wrestlers in the world.

- The sash on her costume is actually from her mentors old costume. Not the most practical addition, but she wears it with pride.
-  Ryoko is very much into her 'character', to the point where she'll typically deny that she's the Black Fang, unless she absolutely has to. She's very much into the illusion, and treats it like she's a real-life superheroine.
- Ryoko thought Batman v. Superman was okay. 7/10. Didn't deserve the hate.
_________________