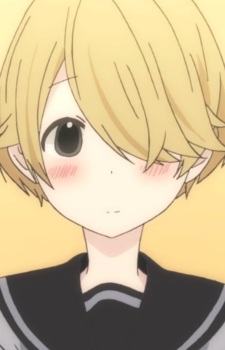 Peach's favorite outfit coincidentally looks a lot like a high school uniform in Japan. This confuses a lot of people. How to properly take care of your Peach Meringue (calling her by the right name helps, though).

I have no context for this image. She wore a maid outfit at some point and someone took a photo, apparently.

Personality:
Peach seems wildly out of place in the AFW, being both very shy and intensely non-confrontational. Usually this indicates some sort of hidden side that is revealed ringside, but... no, that's really what she's like. She doesn't like to hurt people, and while she doesn't enjoy getting hurt she has a surprisingly high pain tolerance (or acceptance, if you want to call it that). The one trait that could be considered hidden under her timid exterior is a powerful sense of determination. Getting her to crack is surprisingly difficult, especially if she has something (or someone) to fight for, and kicking out may be the one skill she has a solid understanding of.

While this determination doesn't keep Peach from getting her ass handed to her in the ring, it does come out in other facets of life. She is very neat and fastidious, intelligent, and generally successful to most things that she puts her mind to. This is often is outdone by her submissive and non-competitive nature, though, deferring to others on what she should do or how she should do it, even when it is clearly not in her best interest. This shines most strongly through her admiration towards her older sister, who she will do nearly anything to please, regardless of whether or not it is good for her. For this reason she usually needs someone else to be almost constantly looking out for her, even if she doesn't realize it.

Growing up, Paige Mendez had everything going for her. Both of her parents were wealthy, white-collar lawyers, raising Paige in an intense, focused lifestyle that she loved. At school, her grades were at the top of her class, and despite her shy nature, she was quite popular. She graduated high school as valedictorian of her class, and even had a few of her papers published in high-school level academic magazines. For all of these positive, forward-moving forces in her life, there was one major force pushing her in another direction. The strongest force in her life. Her sister, Stephanie Mendez.

While both of them were loved, Paige had turned out to be what their parents had always hoped Stephanie would be, but wasn't. The older sister was no less driven, but driven in a wilder, more rebellious direction. Her varied path reached a head when she pursued a career as a professional wrestler, and while their parents protested, Paige watched on with interest. The energy, the charisma, and the raw skill Stephanie (or Strawberry, as she was now calling herself) wielded held Paige in awe, and the more she watched, the more she wanted to follow in her sister's footsteps. It seemed like nothing in the independent wrestling scene could really beat her. Nothing, that is, except for her own insomnia. Every day the effects of her sleep deprivation seemed to get worse, and when her own poor health lead to a particularly bad beating at the hands of a larger wrestler, she was put on a prescription for ambien almost immediately. Although her new, apathetic attitude was hard to get used to, Paige eventually did get used to it, and soon she could read her sister's expressions better than anyone. It seemed like life was going to settle down and give Paige time to go to college once again... when a recruiter from an infamous professional Japanese league came by, and brought Strawberry with him.

Almost without a second thought, Paige followed behind, flying to Japan and tracking down the AFW, the wrestling group that had signed on her sister. In a series of wild impulses, Paige signed on as well, under the name Peach now (to continue the hopefully deliberate fruit theme), and to her surprise, she was accepted! Now Paige- er, Peach could finally do what her big sister did with such passion, and if she was really lucky, manage to impress Strawberry as well.

Wrestling Attire:
Though she wears it a lot, the gray sweater/skirt combo is not actually Peach's attire! Not all of the time, anyway, or even a majority. She tends to wear whatever she was already wearing that day, or whatever the match special attire is (which comes up more than you'd expect).

Fun Facts:
-Peach is a great cook, loves cleaning, and is trained to use first aid. She would make the perfect housewife, if she wasn't so ambitious.
-Peach tries her best to never curse. "Tries" is the key word here.
-Although her parents gave her a credit card under their (incredibly wealthy) account, Peach has always been very frugal. While she won't skimp on quality, especially with food, she will always try to seek out the best deal, and won't spend money on pointless luxuries.