Beda is primarily a power wrestler, looking to use strong moves and submissions to weaken her opponent and leave them broken. Her preferred moves include powerslam's, backbreaker's, powerbomb's, european uppercut's and various submission holds.

Corner-Assisted Razor's Edge Powerbomb: Beda will position her opponent's facing outside on the top turnbuckle,getting underneath them and grabbing their arms in position for a Razor's Edge, before throwing them up and forwards and turning it into a sitout powerbomb. Will sometimes do a normal standing variant.

Sitting Reverse Piledriver: Beda will scoop her opponent over her shoulders and position them for a tombstone/reverse piledriver, and jumps and slams down on to her rear, the momentum giving extra damage to her opponent's head.

Bearhug: Beda will wrap her arms around her opponent's waist and pick them up into the sky, looking to squeeze the life out of them until they tap/pass out.

Stats
Strength: ★★★★★ - Beda's best trait is definitely her strength. If the soldier manages to catch one of her opponents, you'll have a safe bet that she'd do as much pain as possible through any means possible.

Endurance: ★★★ - Beda's strengthened body usually means she can withstand most blows and attacks, but if her opponent is available to constantly deliver attacks or hit ones that involve dealing critical damage, expect her body to eventually struggle against the attacks.

Speed: ★★ - Beda's main flaw is that she is very slow in the ring due to her muscular frame. Her opponent's can try and use this to get some damage on her if possible.

Submissions: ★★★★ - Submissions are a deadly weapon in Beda's arsenal, as she loves nothing more then to squeeze the life out of whoever deserves it. 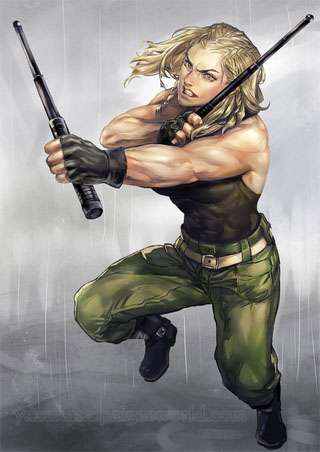 Beda is known for her serious demeanour, very rarely showing positive emotions and is usually reserved when talking to people, almost looking down at them in a sense. In the ring she's not afraid to take advantage of her situation and tries whatever she can to get the win. Whilst she will not hesitate to hurt an opponent, she never fights someone who can't fight and doesn't want to cause more pain then needed. If her opponent is in an obvious state where they can't fight back, she will usually stop or try to end the match quickly. In the ring, Beda wears a tight black vest with green military pants along with black boots and gloves.

Born in Washington DC, Beda Simmons was a single child, raised by her father after her mother died in childbirth. Although she loved her father, there were times where she would never see him due to his role in the military, so most of her childhood was spent with various carers and babysitters whilst he was serving in the army. The last time she seen her dad was when she was 11, when he ended up getting killed in active duty. This devastated her, and in return caused her to completely shut her emotions down, becoming a different person to everyone who knew her. Beda wanted to avenge what had happened to her father, and so spent the next few years training extensively and completely changed her body, giving her large amounts of muscle.

When she was finally of age she joined the military like her dad and served for 5 years, until an undisclosed injury took her out of action, and despite trying whatever she could to prevent it, got forced to leave and return home. Becoming depressed, Beda began venturing into other interests and tried finding other ways to spend her time, when one day she seen the AFW on TV. She was enthralled with the action, and knew what she wanted to do. Over the next year she continued training and joined a wrestling school, until finally moving to Japan once she had finished training, and joining AFW, where she now resides in the Friction division.

Beta will take on any opponent and is not afraid of a challenge, whatever the match type.

Beda Simmons makes her debut with an impact, facing The Black Racer in a No Holds Barred Falls Count Anywhere match!