Background
Ayano Himura has loved two things since she was 8. Heavy metal and wrestling. All she wanted to do when she saw her first match she wanted to wrestle...unfortunately for most people her favorite was one of the worst heels Japan had ever seen. Raking backs, poking eyes, spraying mist and low blows...she loved all of these things! She wanted to learn how to actually fight and wrestle sure, but something about seeing people react to heels always made her smile. On top off all of that, she was going to learn how to play guitar, to help with her persona she was going to develop. Now, how she developed it was....unorthodox to say the least. She would method act, actually becoming an awful brat while learning the craft at 12 all the way up to her high school years, competing in junior feds on the weekends. She would capture small titles, three major titles (well major in the minor leagues) in her first three years.

Then, she got into high school and that's when she had really launched in the business. She competed in a country wide tournament to see who was among the best in the country of Japan. It was a double elimination tournament, the winner would get 25,000,000 yen! She had one her first two matches. Then she lost her third match, which was when she really pulled out all of the stops. Her next three matches where won through...unhonorable ways before making it to the grand finals. The way she actually ended up winning the money though, that's what made her reconized as one of the best heels in Japan. Ayano had waited until the referee had been knocked out before spraying a black mist in the eyes of the opponent before getting the roll up, resetting the bracket so she just had to win one more match. However, since she sprayed black mist the opponent couldn't continue and she won the whole thing! She didn't let anybody forget it either. She used her money to hire a couple of goons. A couple of rather large women who helped her capture another title until she joined AFW, dropping the title and leaving the goons behind. What sort of dirty tricks does Ayano have up her sleeves? Only time can tell.

Personality: Ayano is a brat. She loves to get under people's skin, fans and fellow wrestlers alike. If she isn't annoying you then you could be a friend...or she could be doing it wrong and has to try harder! If you dig deep enough, she isn't awful but after years of acting the way she has it's hard for her to 'break character' and it gets even worse in the ring. She's antagonisic, crass and rude. Care to bump into her?

Favored Matches: She doesn't really have a preference. 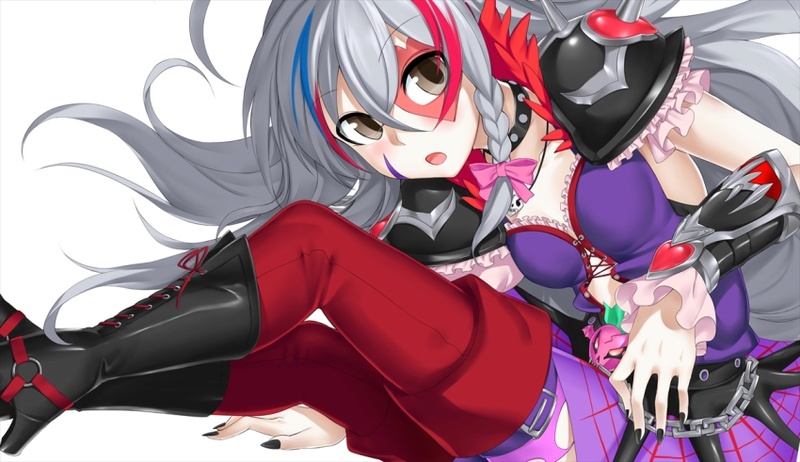 Tactics: While Ayano is able to strike well, grapple well and put somebody into submissions well she would much rather take shortcuts to win and isn't somebody to deny that she has taken such short cuts.

Headbanging Kick- Usually done after spraying mist in somebody's eyes, she'll kick somebody in the knees to get them kneeling over before hitting them square in the face with a big boot.

Crank it to 11!- Ayano will smack her arms against both sides of the opponent's head a couple of times before kicking them in the gut, dropping them down with a snap DDT.