» Yae Mochizuki vs. Kozue Kaburagi - Twin Shadows
by Berial Today at 5:24 am

One of the various duties and jobs of an AFW performer, though some would call it a perk to the job, was to pose and star in production photos, used for advertisements, the web pages, and the AFW Magazine, which had become a high seller, thanks to publicizing written interviews, trivia and event information, special photos of matches in action, and, perhaps most importantly, special photo shoots, of Friction and Tension stars showing off their sex appeal by posing in skimpy outfits for fans to drool over.

Summer was nearing its end, and that meant the time had come for AFW to release its biggest magazine for both Tension and Friction magazine brands: The Summer Swimsuit editions.

It was because of this special edition, that Ryo Kamiya found himself standing in the warm sun, feet buried in the warm sand of Kyoto's Zushi Beach, surrounded by photographers, and some other minor models that were being paid to look sexy with any wrestlers getting their pictures taken, and clad in nothing but his tightest speedo, a dark green color, though he had brought extras of different colors. While some wrestlers balked at the idea of appearing on a national magazine in a swimsuit, Ryo personally saw it as an honor, a sign that both the company had faith in him to promote him, and that he was gaining a fan base that wanted to see more of him.

Even better for the boy, who was currently posing by leaning against a tall umbrella stand, near the change area, hands behind his head to show off his slim, yet sexy body, thanks to AFW's recent and current champs, such as Clyde, Reira, and tag champs Dai and Sion, all being rather "Anti-Fanservice" types, none of them were appearing in this issue, and as a result, Ryo had been told he was being considered a top pick for the cover of the Tension Magazine Swimsuit Edition, during his very first time being in it!

The honor of that, not too mention the exposure, fame, and attention that would give the rookie would be huge, and Ryo, as a result was flying high. After a few more pics however, he was given some more news.

"So Ryo, just so you know, we are considering a couple other Tensions stars for the cover. Would you be alright if we brought our other top pick out to pose with you a bit?"

"Sure thing! Go right ahead, I'll pose with anybody as long as their cute and sexy! Maybe we'll even give you a few nude candid shots!"

Ryo responded, hands on his hips as he looked towards the changing room to see who the production assistant was being sent to get and bring out to pose with him on the beach.
_________________
Check out the recently revamped Roster Page, now with pics!

Ryo wouldn't have to wait long for his partner to step out onto the beach. Though not really really a Tension wrestler, Erica was know to wrestle there once in a while and the opportunity to get her in the magazine was too tempting to pass up. 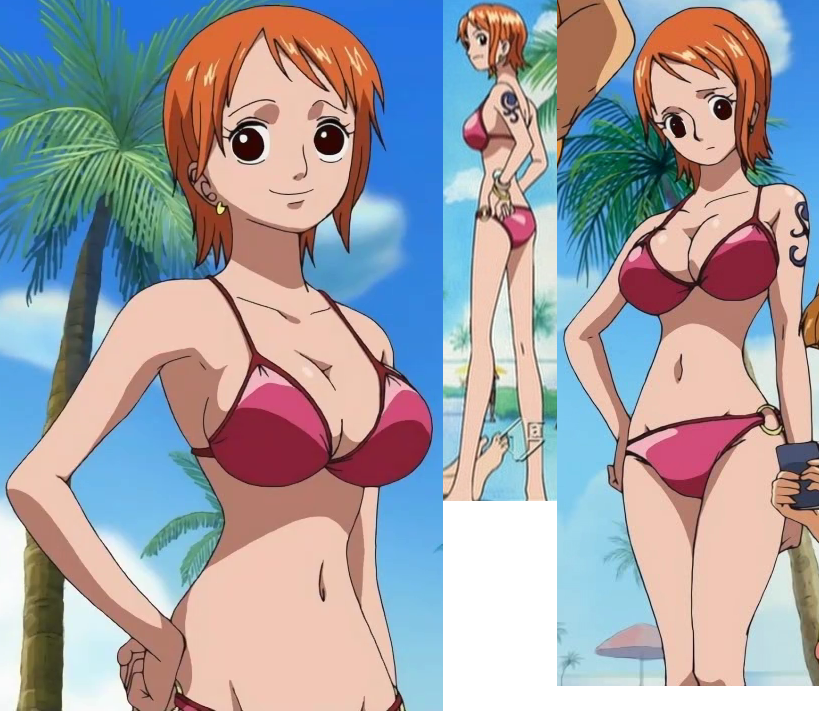 Erica was wearing a sexy bikini as she made her way over to Ryo. "Remember me?" Erica said as she winked at Ryo as she moved to stand beside the boy. Erica would then bump her ass against Ryo's crotch before striking a pose that showed off Erica's curves. "The cover is all mine." Erica would say knowing that she could out sexy Ryo.
_________________
Characters

But...she was also REALLY sexy, a true beauty, and seeing her clad in just a skimpy bikini, having her tight and firm butt brush against his crotch, and seeing her sexy pose, all left him speechless for a moment, before snapping back to attention.

He replied, striking a pose of his own for the camera, showing off his cute speedo-clad butt, turning and winking at the camera with a cute smile as the sun glistened off his tan body.
_________________
Check out the recently revamped Roster Page, now with pics!

Erica couldn't but stifle a laugh as Ryo tried to out sexy her. "That's cute but i think i know what our fans want." Erica would say before grabbing Ryo's hair and burying Ryo's face in her cleavage. "Take a picture of this." Erica would say as she would wink at the camera while smothering Ryo in her chest. And just for some extra humiliation Erica would reach down and give Ryo's ass a swift spank. "This is why i will be on the cover."
_________________
Characters

Ryo's yelp ended up muffled in the beautiful Erica's cleavage, the camera getting several shots of him struggling and stamping his feet around, as well as a perfect shot of her spanking his cute butt.

Finally, he got out of her grip, pulling away from her cleavage, frowning as some of the camera people chuckled.

He yelled, before sweeping his leg out, trying to trip Erica onto her butt, so he could grab her hair and force her face against his speedo clad crotch, rubbing his crotch against her face, gyrating as he winked and gave a cute smile at the camera.

Erica couldn't believe that Ryo had placed her in such a humiliating position. Erica would not stand for this as she saw the photographers capture the moment on film. Erica would quickly wrap her arms around Ryo's legs before lifting the boy up. Erica would then try to slam Ryo down into the sand.

Ryo's counter had worked, allowing him to embarrass Erica and also get a sexy picture of himself taken...but it had also pissed Erica off, something Ryo was about learn was a bad idea...


He yelped, suddenly being lifted and slammed down onto the hot sand, splashing sand everywhere, as he lay on the ground, dazed from the impact.

The photographer meanwhile, was loving this. Having done several shoots for AFW before, he was used to seeing wrestlers get lewd and nude and crude in these photoshoots. Hell, it's why the magazines sold so well! Having a hot young talent like Ryo was one thing, but now that Erica and he were trying to out-sexy the other, it was just getting better!

Ryo squirmed, Erica trapping his smaller body under her own, the feel of her lovely breasts rubbing against his chest giving him pause, the grinding of her crotch against his own getting him nice and hard for her, his stiff member pressing against her crotch, as she forced a low moan out of him!

Erica would not stop her sexual assault on Ryo. "That's right, moan for me little boy. Show the world just who is the sexiest person here." Erica would say before shifting herself forward slightly to press her breasts down against Ryo's face. "I can't wait to see this picture in the magazine." Erica would say as she saw the flashes from the camera capture this moment.
_________________
Characters

Ryo protested, though it was once again muffled by the sexy woman's breasts. This time though, he grabbed her hair, giving a big tug to the side, while thrusting his body up and to the side, rolling the redhead onto her back with him on top.

He yelled, reaching down to pinch the womans nipples through her bikini top!
_________________
Check out the recently revamped Roster Page, now with pics!

Erica thought she had Ryo down and out as she pinned him beneath her breasts. However, Erica soon felt a pain explode in her head as Ryo tugged her hair. "You asshole!" Erica yelled out as Ryo flipped their positions. Erica soon had another problem as she let out a moan as Ryo pinched her nipples. "Stop that!" Erica would say before reaching forward to return the favor by pinching Ryo's nipples.
_________________
Characters