Wrestling Info – A heavyweight rookie, Akane’s main strengths are her size and her upbeat enthusiasm. She has a basic knowledge of prostyle so can just about hold her own with holds and throws; if she does manage to get into a dominant position though, she can unleash some pretty punishing power moves. Akane’s lack of technical prowess doesn’t seem so problematic when she is slamming her opponents to the mat, or simply sitting on them for the win! Feisty and uninhibited, Akane will happily mix some spicy humiliation moves into her wrestling if the situation allows, though when indulging her impish impulses she stays on the playful side - Akane doesn't have the ruthless self-control of a hentai wrestler and tends to avoid outright sexfights.

Trademarks and Finishers:
“P.I.P – Perverted Inverted Piledriver” – Akane simply holds the opponent upside down, facing her crotch. Keeping them there, Akane teases everyone by running her tongue right between the victim’s legs… before slamming them down in a piledriver, and shuffling forward to apply a facesit pin for the finish. Pip is quite brutal for such a cute name!
“In Your Face!!” – With the opponent seated in the turnbuckle, a gleeful Akane will shake her bountiful rear in their face, twerking for all her worth as she transitions to a hip-grinding stinkface. Not shy about slipping her bikini bottoms down to add to the humiliation, and her full figure means she can sometimes manage a smother KO from this position. 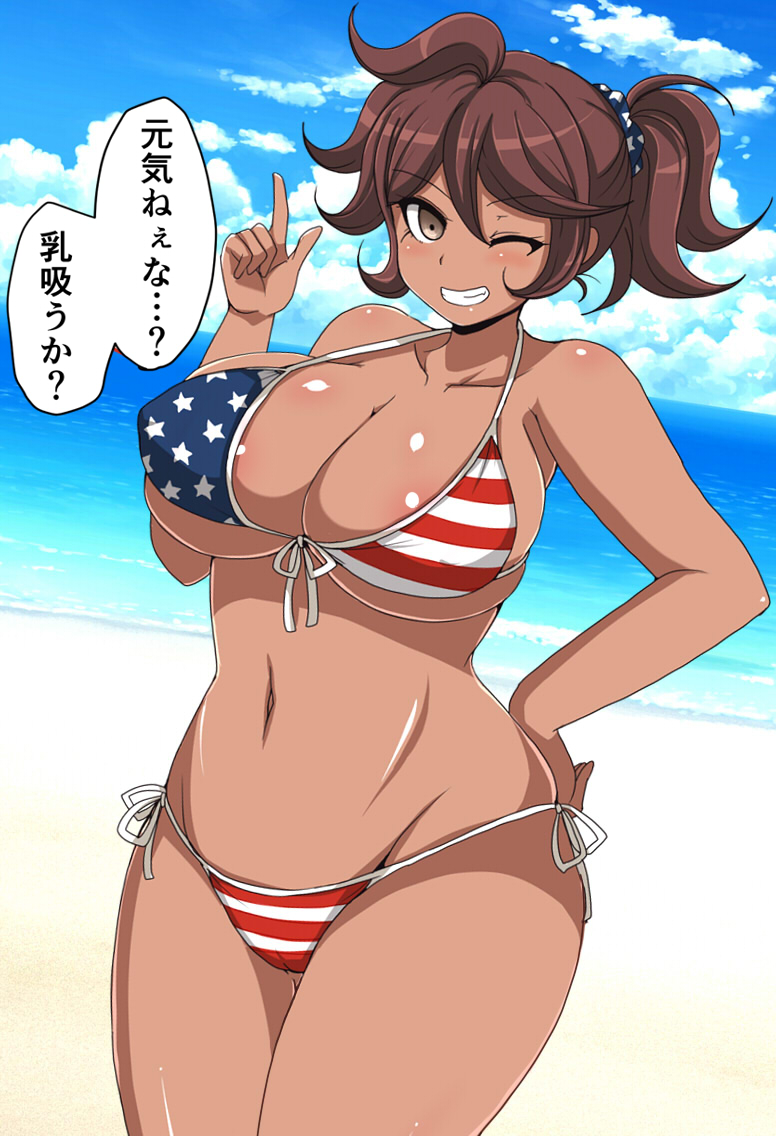 Appearance and attire - Akane is big, busty and curvy, though she shouldn't be discounted as fat, and there is a fair amount of muscle tucked away on her full-figured frame. She is a good-looking girl, with golden brown skin, hair and eyes, and rarely needs to bother with much make-up. She tends to wrestle in simple skimpy bikinis, all the better to flaunt her voluptuous body (and to give unlucky opponents a face full of it).

Past - Akane was born in a wealthy Californian family and had a happy, privileged childhood. Her father was a Japanese entrepreneur who owned an adult video company, and her mother was a star of the local erotic wrestling circuit who ended up marrying the owner. Akane is mixed race, and her middle name is Carmella in honour of her Hispanic mom. You might think that growing up in an LA mansion where adult movies were being filmed would have an adverse affect on someone, but Akane was well loved and seems pretty balanced, if a little forward and uninhibited sometimes. She just occasionally forgets that not everyone had a mud wrestling ring in their back garden.

With a pretty short attention span, Akane was hardly the best academic performer, and dropped out of college to go visit her Japanese homeland. The experience has been pretty disorienting, as Japan is not always what she expected when growing up. She's far from bilingual, with only a basic knowledge of Japanese language. Still, she has managed to latch on to at least one understandable pastime - pro wrestling - and established herself there.

Personal Info - Defying the 'spoiled rich bitch' stereotype, Akane is pretty sweet and friendly. She does however have a tendency to take the easy options in life, and readily gives in to her own impulses. Having squashed a few smaller girls early in her wrestling career, she probably overstates her own abilities, though this is more through carefree ignorance than actual arrogance. Akane is also a little taken aback at how stifled and traditional some aspects of Japanese society can be. Used to getting whatever she wanted back in the States, she was stunned when she found out Sumo training was largely blocked to her. As a result, she sometimes plays up her American angle with a stars and stripes bikini, as a little 'fuck you' to the fans, although it's meant largely in jest, and she is far from a heel in the ring.