» Lilliana Reynolds Vs. Atalante Pallas
by Iceman Today at 1:41 pm

» Lady and the Prince: Claudia von Bismarck vs. Daisuke Takeuchi
by Teenwrestler Today at 1:35 pm 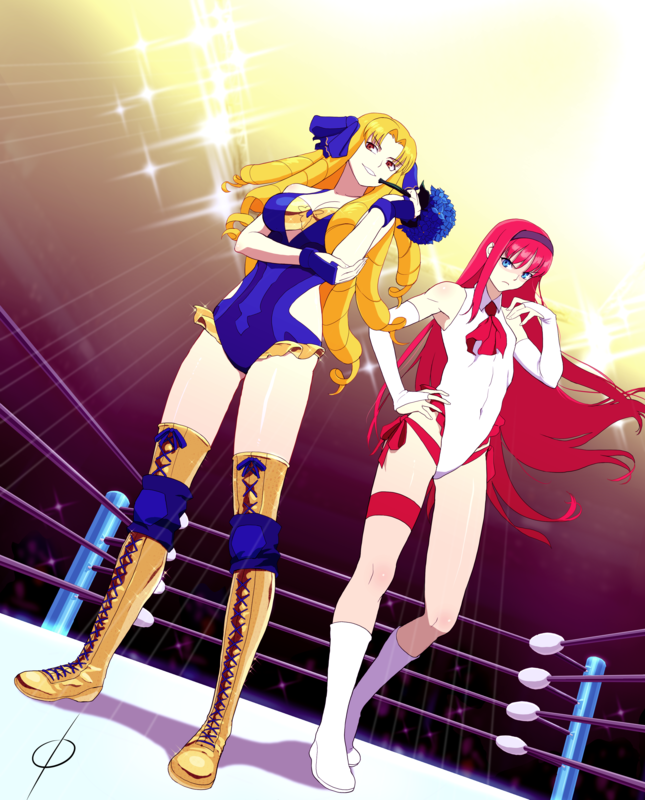 
Team Strategy: Akiha tends to be the the high flyer of the group, relying on her arsenal of high risk and high reward aerial moves along with various power slams as well.  Which is in stark contrast to Gwendolyn, the self-appointed team leader who leans more towards dynamic strikes, submissions, and agile counters to turn the table on a moment’s notice. Though despite their varying wrestling styles, no matter which heiress which you face in the ring, expect shady tricks and dirty tactics to help ensure their victory over their lower class opponents.

1) Beau Monde: With one heiress holding on to their standing opponent from behind in a waist lock, the other will perform a jaw-breaking superkick followed by the other member performing a bridging German Suplex.  More often than not leading into an immediate pin attempt, or in some cases another setup of this same move by bringing the opponent back to their feet.

2) Winfall: Starting off with Gwendolyn performing a swinging neckbreaker to stun and lay their opponent out, Akiha will then climb the nearest turnbuckle and leap from its highest perch perform a flying senton immediately afterwards.

1) Sovereign Pedigree: An enhanced version of Gwendolyn’s Royal Pedigree finisher. Once Gwendolyn gets into position for her trademark finisher before implanting her opponent’s face into the canvas, Akiha will climb the turnbuckle before jumping in the air to perform a frog splash onto their opponent’s spine. This results in both Gwendolyn and Akiha's weight and momentum being added to the move and causing even more damage to their flattened adversary.

2) Prestige Plunder: An enhanced version of Akiha’s Plunder finisher. Once Akiha gets her opponent in position for her regular Plunder, it will finally be Gwendolyn’s turn to climb the top ropes. The heiress then jumping off the turnbuckle and grabbing her opponent’s feet as Akiha jumps in the air. This results in a far greater impact and both the heiress’ weight being added on top of their opponent for the dual pin attempt with Gwen still clenching onto their foe’s ankles and pushing down.

Spoiler:
Naturally debuting on a PPV, Imperial Order takes on Maids without a Mistress in a tag elimination match: Cancelled

Imperial Order decides to host their first promo, Crème De La Crème and calls down Pride Queens as their next opponents

After a successful defence, Imperial Order calls down their next guest for Crème De La Crème, Sonic Boom

A year after their debut, Imperial Order does a Trick of Street Fight match in Fright Fight versus Onigashima: WIN

Looking for opponents in Avalanche in order to defend their title belts, Imperial Order decides to create their own tag team opponents, Valley Doll and Masuyo Ai

In an elimination tag match during Avalanche, Imperial Order takes on the combined might of Valley Doll and Masuyo Ai for the Tag Team Champion Belts: WIN