Search
Latest topics
» Giant Steps
by LtLukas Today at 2:55 am

Mahalina was beyond excited. The AFW had accepted her, hopefully seeing talent and not just tits in her application. Now, she had some work in front of her. She had compiled a list of what she planned to do now that she was working for AFW. The list went as follows:

So here she was, carrying out step one. She approached the gym, bag draped over her shoulder, and smiled. For such a dirty line of work, the gym was very well maintained, almst to a beautiful degree. As she stepped through the doors, the Filipina woman had to pick her jaw up off of the floor.

At least four rings. Countless exercise machines. Wrestling mats. Punching bag upon punching bag, seemingly endless rows of bench presses. Everything she could ever hope to use was there, and she grinned. She pulled her phone out to check her locker number as she walked towards the gym. 146.

Even the locker room was nice. It was sparkling clean, with spacious showers that allowed for privacy if it was wanted. Mahalina giggled at the thought of how many fuckings had happened there, surely. After checking out the amenities, Lina made her way to her locker, put a lock on it, and began to change.

In no time, she was in her sports bra and athletic shorts, the same attire she wore in the ring, and she was surveying the room. What first... oh! She had to warm up. Of course. She found an empty spot in a corner where she assumed she wouldn't bother many people, and started stretching, facing the wall. She chose a spot where she wouldn't be a bother, yes, but that didn't mean she didn't choose it to be seen. Another great thing about this gym was that it was chock full of hotties, of both genders. For her body to be admired by one of them would be like a weird kind of honor.

Ugh! She became a little disgusted with herself for thinking such dirty things, but quickly reminded herself that AFW was not a league where being perverted was bad. In fact, it might be better to be. But for now, she thought, outside of the ring? It was best not to. Despite their setting, these were all civilized members of society. Perverts are called perverts for a reason.

Her display attracted no observers, so she sighed, got her gloves out of her bag, and got to work. Her first target was the punching bag. She began bouncing on her heels, ducking and weaving past punches that weren't there, and pounding on that bag. 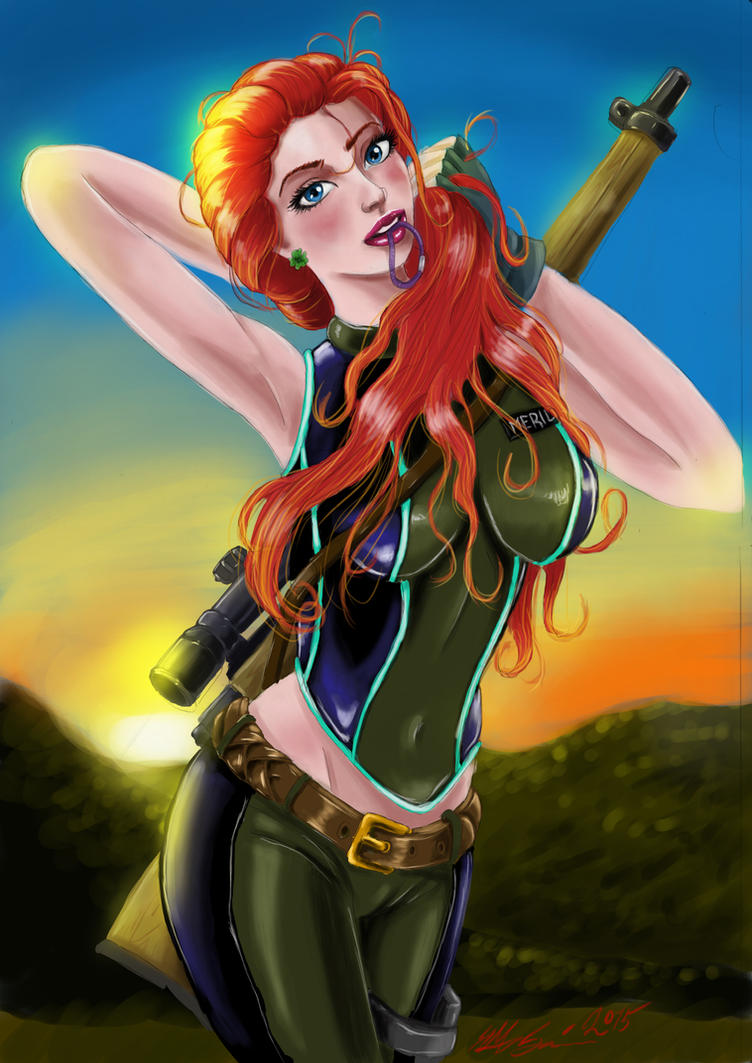 Nya herself had been at the gym for the past half hour or so. After her recent losses, to say that the Irish Lass was a wee bit angry was an understatement.
She had been furious for the past week since her last defeat, and had been to the gym on the regular to help her ready up for her inevitable next fight. The gym, while not exactly bursting with people, still had a fair number to it, though they all tended to congregate toward the workout machines. That's where all the fans were apparently.

Sticking to the more secluded corners, she spotted a new face among the heavy bags, hammering away with a pair of boxing gloves. Interesting. IN all her time she never met a boxer before. She certainly had the strength to knock the bag a ways. Walking over, the Irish Redhead steadied the bad, peeking out from behind and smiling at the new arrival.

Mahalina jumped a little, and spun on a dime. Still in fight mode, she readied a punch! That is, until, she saw it was just a friendly ginger girl. She stood down, and laughed a little nervously. "Sorry about that." the Filipina boxer said.

"New? Yes. I just joined AFW, because I heard there was a boxing division." She nearly gave the real reason she joined, but refrained. "I thought it would be on a higher level of competition to my old circuit." she explained.

She turned back to the bag, and started working out again. While she was punching away, she asked a question of her own of Nya. "Why do you ask?" she enquired between bag-swinging punches and imaginary dodges.
_________________
The Russlers

Apparently the new girl was a bit on the jumpy side. No sooner had the words left the irish woman's mouth than her new acquaintance spun around, ready to punch her square in the face. Backing up a step, she raised an arm to block the hit, but it seemed the mystery woman had quite the self control, stopping herself mid punch.

"Well ye came to the right place. Plenty of competition. Though I'm certain ye can handle yourself around here.." she said, giving her new companion a look. Very fit, even for a new arrival.

Now, that made her feel even more special. Maybe she would have a shot at doing really well in the division! And if AFW didn't see many new faces, maybe they saw something in her... so exciting!

She smiled and nodded at her new acquaintance who had taken to holding the bag for her, allowing her to punch far faster. She hammered out a combo of probably 7 jabs, one per second, making sure that whoever this imaginary bag person she was fighting was not getting up for a while.

Nya smirked, watching the intense look on Lina's face as she hammered the bag, feeling the effects even through the bag. Quite a bit of power behind those fists.

"About a lot of things." Nya said, being purposefully vague just to tease her new friend, "But mostly about how good you are in the ring. You can make hammering a bag look good, but how would you fare against a wrestler?"

She was hoping the woman would take the hint as she glanced toward the empty ring. A few wrestlers had ended up calling it quits for the day and were on the way out, as was the case during the later hours, leaving their section of the gym rather sparse.
_________________
*sigh* Ok let me get the passcode.....all set, go on in!

Lina stopped, and wiped the sweat off of her brow. She crossed her arms and struck a sassy pose as the new acquaintance of hers was vague, and then made clear what she wanted, not-so-subtly. "So I take it that you're a wrestler, and you want to spar with me?" she asked.

To be honest, Mahalina had no idea how she'd fair against a wrestler. She might get destroyed. But then again, it could be fun, and it was only a spar. Ah, why the hell not? "Well if I'm going to fight you, I should at least know your name." she said, before adding: "I'm Mahalina. Friends call me Lina."
_________________
The Russlers

Nya's face turned a bit red at her friend's direct approach, pretty much discerning what she wanted. SIghing, she raised her arms up and shrugged.

"Caught me red handed." she laughed, "Yeah, I wanna wrestle you. Never fought a boxer before. It might be fun. As long as ye don't go easy on me. Name's Nya Flynn."

"Sure. But do I get to punch you, or do I have to try and wrestle you?" the Filipina asked, her full attention to Nya now. "Cool name, by the way." she said, before her future sparring partner set off for the ring. She smiled, and followed. "Should I wear my gloves?" she asked as she followed, still wearing the red things.

The ring. She knew it was nothing, just a spar, but she still stopped. She was getting into the ring with a real, AFW wrestler. As she stood there, she saw Nya's wink and laughed. "Now what is that supposed to mean?" she asked before she too slid in, pushing herself up once she got into the ring.
_________________
The Russlers

Nya laughed, "DO what you do best Lina. Though keep the gloves on for now. After all, it's not like we are having a barroom brawl or anything."

After Lina caught her wink, she slid into the ring and called to her for what that meant. Feigning ignorance, the Irish girl waved her hand, "Can't say I know what ye talking about. Could mean anything really."

Crouching in her corner, she couldn't stop the big smile tugging at her lips. This was gonna be fun. No feud, no bad blood. Just two attractive women duking it out in a ring. No biggie.

"Usually we have rule or stakes here, but I'm not too uptight about it. Unless you want something for winning?" she asked, knowing what usually went down with spars. She heard it was usual to propose stakes but she was neither here nor there about the matter.
_________________
*sigh* Ok let me get the passcode.....all set, go on in!