Fighting Style
Remy relies mostly on speed to face her opponents, if she manages to get the advantage, she will use her arsenal of strikes and submissions to weaken them down. Remy isn't afraid to bend the rules however, and so if she has to she'll go for a cheap shot or use a weapon if it means getting the advantage back.

Signature
Corner Cannonball: Having her opponent sat up in the corner, Remy will step back to the opposite corner before launching straight towards them, using her momentum to flip and harshly connect her lower body/rear into the opponent's upper chest/head. (Gif for comparison)

Impaler DDT: Grabbing her opponent's head and trapping it in a headlock position, Remy will grab her opponent's lower body and use what strength she has to lift them up into the sky before dropping onto her back and slamming them face down (Gif for comparison)

Stats
Strength: ★★ - Remy doesn't have much strength due to her much more nimble form, so don't expect many power moves. In some cases she may be able to do a move such as a piledriver or a suplex, but doing so will definitely take some energy out of her.

Endurance: ★★★ - Remy's endurance is a mixed bag. Whilst she definitely has what it takes to go the distance and have a longer winded match, it all depends on if she gets caught. If she ends up getting trapped or caught in some stronger moves, expect them to take their toll throughout the match and even potentially slow Remy down.

Speed: ★★★★★ - Remy's greatest advantage is her speed, being able to move at dangerously high speeds, she depends on her dodges and lightning-fast dodges to get through and win her matches.

Submissions: ★★★★ - Whilst some of them could use some improving, Remy is known for her arsenal of submissions, being able to twist and contort her opponent in any way she sees fit. To all her opponents they have to be aware of not letting one of their limbs or body parts getting exposed for them, otherwise they can find themselves in high amounts of pain. 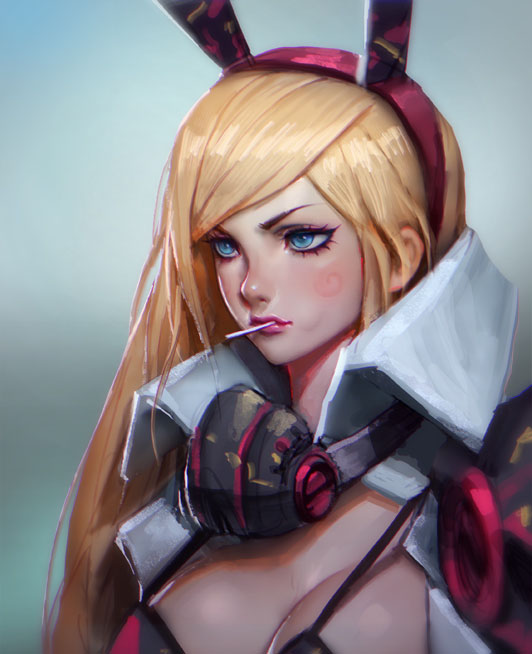 Personality
Remy's personality is very straightforward. Don't get in her way and don't piss her off. No matter the opponent, Remy will take all her matches her seriously and wants to win no matter what. She usually tends to be sparse with her words, but will insult and degrade her opponent once the advantage is hers, usually trying to rile them up and taunt their mistakes whenever possible.

In the ring Remy decides to wear her futuristic looking gear, made up of a tight red bra, white lacey underwear and Red boots, which connect to matching white thigh straps. Also during her entrance she will wear her headband fitted with mechanised bunny ears, a staple of her persona.

Backstory
Somewhat of a celebrity in her hometown, Remy 7000 is well known for her DJ skills, having released a fair few albums and hits around the world. Appearing randomly one night in a night club performing DJ music, her music slowly became more popular amongst people and soon enough it led her to fame and fortune, now the woman rarely does concerts but whenever they are announcnued, they are guaranteed to sell out within a short amount of time. Despite the fame, not much is known about her apart from her name and futuristic appearance, leading to theories from her fans such as her being an alien or a robot. Despite all this, no one knows for sure of Remy's past except Remy herself.

Eventually Remy grew somewhat bored of the DJ lifestyle, to which she began expanding her interests to other forms of entertainment, leading her to professional wrestling. Something about how the women showed and presented themselves, and how confident they were grew on her, and soon Remy realised she wanted to follow in their footsteps, and conquer the wrestling world just like she had the music world.

Finding the best experts in france to teach her, Remy passed with flying colours and began exploring various federations, her surprised fans following her every step. Eventually this led her to AFW, where she now resides in the Friction division, eager for her next challenger.