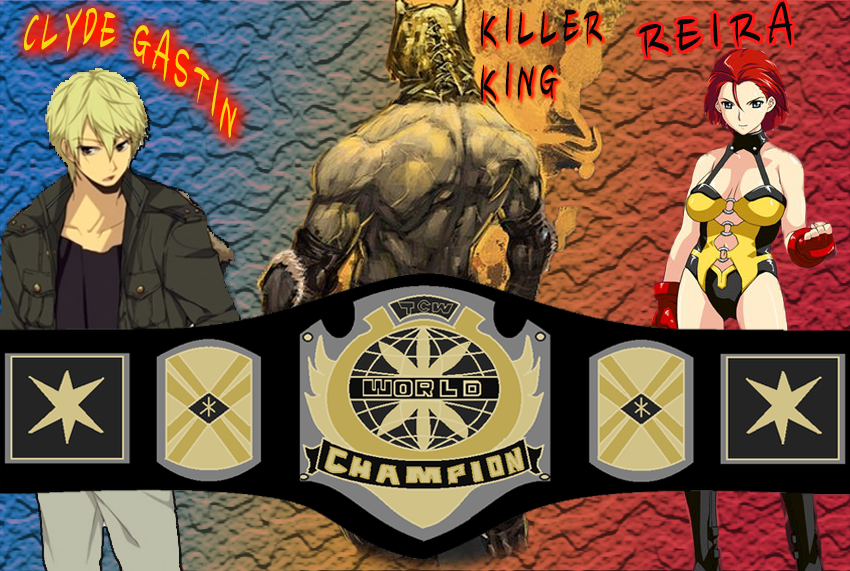 King finally got an opportunity to get his chance for the title belt that he long waiting for, a belt that he wanted to hold more than a day, more than a week, month, year, eternity! The great big beast gotten ready in the locker room for HIS main event match going up against the stupid cowboy Clyde Gastin and the hot-headed bitch Reira, all gotten title belts under their names and held onto longer than he have, King expected to be the next greatest Tension Champion of the World!

Coming out on stage where the whole crowd booing at him as usual, flexing his arms as he roars out loud showing off his black boots and tight wrestling pants with his signature black leopard mask, doesnt need to look fancy since he'll be kicking ass and take the title leaving everyone knocked out and sent to the hospital for the recovery.

King heading down the ramp minding his own business going around the ring glaring at everyone that caught his eyes until getting near the steel steps to walk up and getting on the ring apron, stepping over the ropes to get in, climbing the nearest turnbuckle and raising his arms up, roaring once more trying to overlap the loud booing crowd before hopping off, getting to the center and pounding his chest, he is eager to crush his opponents, doesnt matter who they are, both WILL get their asses kick!

Reira, frankly, had waited goddamn long enough for this match, and to finally get her title shot. When her music started playing, she had no desire to bother pandering to the crowd or dealing with dumb bullshit like that, choosing instead to charge down the ramp, running full speed, until she reached the ring, sliding under the ropes and glaring at King, the referee having to force her to stay in her corner and not just start fighting him right off the bat!

After the two most notorious villains of Tension made their way to the ring, the arena grew silent for the awaited arrival of the champion who made his slow trek from the back to the gorilla position. A stone cold stare on his face as he felt like he was marching to what could be his final battle.

"Heavy Is The Head" began to play as Clyde Gastin slowly marched out onto the stage in front of a roaring crowd, wearing the tension title upon his waist as he slowly lurched out on the smoke covered ramp, his face obscured by his hat.

He stopped in the middle of the ramp and touched the hat before sharply lifting it up, revealing the wide grinning cowboy, clad in his long black wrestling tights with matching pads and boots. He hurried down the ramp with long steps as the crowd reached out for him.

He eventually made his way up the steps and onto the apron, where he walked to a nearby corner and climbed it before unlatching the title belt and raising it high to the cheering crowd as cameras flashed. He then hopped off the turnbuckle and stared at the two in front of him with a wide grin.

"Know what's great about today, boys!? I ain't just kickin' yer asses one at a time! It's gon be both at the same time for the gold, bitches! Whew!" Clyde declared as he raised the belt in front of him before handing it off to the ref, who raised the belt high for the crowd and cameras and then.... Called for the Bell!"
_________________
Friction: Kelly Conway Zipporah Amos Boudreaux "THE Cyclops"  Bonnie Gastin Andrea Umlaut White Mamba  Trixie Lasek

King watching the stage to see Reira the stupid red haired bitch coming in HIS ring and eventually the so called champ coming later on with THE BEAST title belt, all he needs to do is defeat either one and take the gold for himself, may be challenging but it wouldnt matter much, he wanted it and wanted it bad.

As soon the belt were taken by the referee before the bell starts, he looks at Reira and Clyde to see which one he would go after first, the bitch or the cowboy, thinking he would take on the scrawny champ first since he doesnt want him to keep the belt for long and wanted to put that smirk right off his face!

"GRRRRR!" King now targeting Clyde as he rushes right out for him, the beast doesnt seem to run fast but still terrifying to see a large man charging for someone smaller than himself, as the beast gets close enough he tries to lift his foot and aiming to give the stupid cowboy an hard big boot to the face!
_________________
KillerV- Character Select

Pff, stupid Clyde. Acting all tough. Hpw did she ever lose to the stupid, handsome, cowboy?


Seeing King charge out of his corner as the bell rang, Reira did the smart thing, and dropped to the mat, rolling out of the ring, both to avoid his charge, which ended up being aimed at Clyde, and to start looking under the ring for some weapons!
_________________
Check out the recently revamped Roster Page, now with pics!

Clyde saw King rushing and he was as quick as he was massive! Thankfully for Clyde he was quicker and backed up against the ropes right as King rushed him and Reira left the ring.

Wasting no time, Clyde dropped low while pulling the top rope! Trying to let King's leg sail over the rope and let him tumble over the top rope to the floor below.

If that worked, Clyde would stand up and scan for Reira, recalling where she had rolled out. Without a moment to spare, Clyde ran for the ropes before dropping into a slide, trying to baseball slide kick Reira right in the face or top of her head as she searched for weapons!
_________________
Friction: Kelly Conway Zipporah Amos Boudreaux "THE Cyclops"  Bonnie Gastin Andrea Umlaut White Mamba  Trixie Lasek

King wanted to give this stupid cowboy Clyde a good boot to the face, using his face like a door mat and rub it in and stomp it down hard! Just when he rushing closer in no time, he raise his foot and goes for his head about to knock it right off, though he saw for a glimpse moment of Clyde ducking down and pulling the top rope, King couldnt stop and found himself flying right over it and tumbling down to the outside floors and rolling right into the barricades. "UGHHH!"

He lay there on the floor groaning that the pain was just painful, that bastard just out smarted him and he hates it, though it'll take some time to recover from this epic failure of crashing to the hard floors. "Fucker..... ughhhh..."
_________________
KillerV- Character Select

Fortune smiled on Reira this day, it seemed, as she found a treasure trove of shiny things under the ring. Afw officials often liked to keep the underside of the ring nice and stacked full of weapons for matvhes like these, and she was soon pulling out trash cans, a kendo stick, and a couple hard steel chairs.


She had been looking for another toy, when the sound of something thumping on the mat, getting closer, caused her to peek her head up over the apron, just in time for clydes booted feet to smash into her face!

With a cry, she fell back onto the floor, blood gushing from her nose, as she held her face.

"Yaah!" Clyde cried as he raised his fist to the crowd after dumping King out of the ring and kicking Reira square in the head, earning first blood! Already the champ felt like he was on top of his game, expertly evading the two heels and staying strong.

"Damn, girl! You bleed quick..." Clyde said before grabbing Reira by the hair and trying to roll her into the ring.

From there, Clyde began to hurriedly throw the various weapons into the ring, the two trash cans and a steel chair, along with the kendo stick. Clyde then grabbed one of the chairs and began to scale back onto the apron, climbing the top rope with the chair in hand, preparing to leap off and slam the chair face first into Reira!
_________________
Friction: Kelly Conway Zipporah Amos Boudreaux "THE Cyclops"  Bonnie Gastin Andrea Umlaut White Mamba  Trixie Lasek