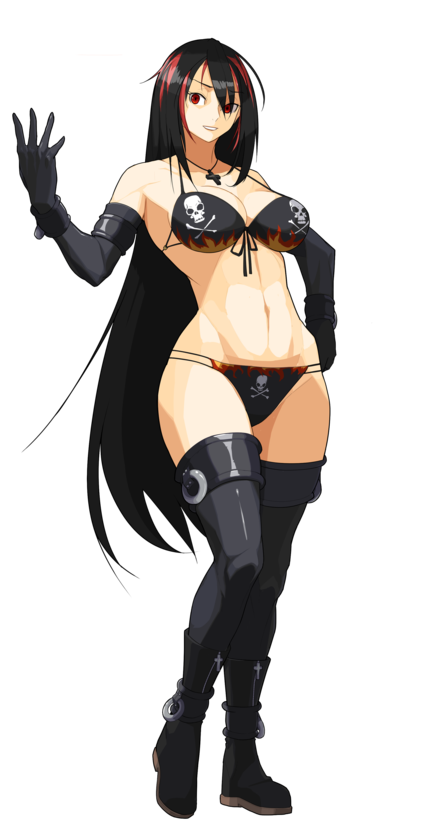 
Alignment: Chaotic Heel
Fighting Style: Straight Up Brawler
Preferred Matches: NHB, Falls count anywhere, Cage, TLC, you name it. As long as she can hurt someone she is there

Preferred Moveset: Strikes mostly, a few odd submission holds, anything that can be set up quickly and gain Maximum pain. Lucy doesn't like to waste time 'setting' things up. Is most certainly not a high flyer and avoids heights wherever possible.


Personality: Lucy is not evil. She is just in it for herself. She believes that she is the best hardcore/brutal fighting woman in the world, and she doesn't need belts or championships to know it. Her confidence is possibly one of her more unnerving features but in regular fashion it can lead to her downfall through overconfidence; Lucy just doesn't see it that way though. On the Morality scale Lucy is sort of Amoral, choosing her stance or inclination based purely on the situation infront of her. This can cause her to be a kind of wildcard with relationships and decisions, leading to friendships/alliances that are unorthodox or just unheard of. She has no issues siding with Faces or Heels depending on the situation and would have no issue forming a tag team with a Face if it got her closer to her own personal goals/gain.

Behind the scenes and behind the persona Lucy is actually a normal human being with fears and nerves. Her persona forbids her to show it and it seems to come out more when she interacts outside the ring with people. However the more that Lucy engages in her wrestling persona, the more distant she becomes outside the ring. It is inevitable that if she plays her persona for to  long, the persona and Lucy may just become one.

History: Lucy grew up with wrestling from a young age and her mother and father were both professional wrestlers. This gave Lucy the sort of 'prime' education that most wrestlers dream of. From a very early age she was in the locker rooms of the arenas and watching her mother and father compete. She started competing in her late teens and during her time as a wrestler she has been training in every discipline imaginable. She is perfectly capable of being a submissionist, a highflyer, you name it, she can do it, and do it good too. However her issue was her persona, her character. She could never find a mould that fitted and that fans enjoyed.

Eventually she was paired with with another wrestler and the Skull Vixens were created, and Lucy Kage was born. The character gained a following quickly, mainly for her brash, overconfident, larger than life persona and the Skull Vixens became the leagues more dominant tag team in the roster, eventually scoring the tag team championship. However, the two wrestlers behind the scenes couldn't stand one another, and eventually this began to spill out onto the ring too. Things came yo head one night, and from there the alliance fell apart. Lucy, looking for a fresh start, got onto a plane and left for Japan,  a few months later she found herself at the doors of the AFW, looking for a few new skulls to crack.

The Trials of Lucy Kage
Part 1: The Welcoming Committee