Seven seas of Anarchy!: This is a series of strikes. She will daze her opponent with a headbutt, then use both fists to punch each side of her opponent hard. She then grabs her opponent's head and slams a knee into their gut and falls backwards, driving the knee further into them.

Anchors Away: She sets an opponent on the top ropes and then runs forward, scrambling up the ropes and grabbing ther opponent's head. She leaps over the rops and slams the opponent down on the outside of the ring, landing on her feet herself. 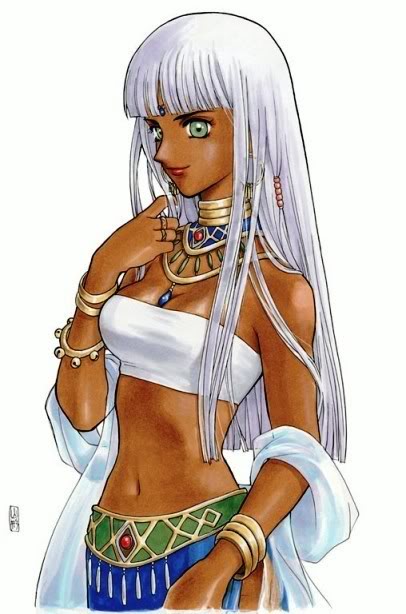 Personality: Growing up in literally a lawless land, Fathia has done what many people who wish to survive in the region do, become a pirate! Because of her occupation, she has a sea weathered hardness about her. Though she also sports a wiley charisma that lets her interact with others. Fathia's biggest weakness is her greed. She's very very greedy and is willing to do almost anything for some money whether it be beg, burrow, steal or deal. A piece o eight is the key to her heart.

Past/History: Fathia was born in Somolia in Africa which is a nation where the idea of a government is little more than a farce. A state that is nearly lawless and mostly tribal and has a reputation for housing pirates. Born to one such pirate on an eve of drunken reverie and mothered to a reluctant victim of the nights indulgences, Fathia stayed with her mother simply trying to eek out a meager existance. Life in such a desolate area made her hard and though her mover loved her she always wondered about the kind of life her father had. She didn't hate the man for without him she would not exist but she felt some sense of desire for revenge. Though she could not put her finger on it, she felt that maybe she should for her mother's sake who, with her only child, lived very poorly.

When she was able to she left the land and obtained her sea legs, working as a pirate and looting the vessels that traffiked so frequently in the nearby shipping lanes. She became quite adempt at the life and was even able to make enough to get her own ship and crew. She learned the ways of Surma stick fighting and used her skills to keep those in line who didn't agree with her or attempted a mutiny. What made her even fiercer was that even though it was a world of guns, Fathia refused to use one herself. She would carefully pick her targets and hijak entire ships with little more than her small crew and her large heavy stick.

After many years of the life she seemed to have completed her assigned tasks. Her mother lived quite richly and she ad gotten the revenge on her father that she had seeked but it was not enough. The fortunes that came along with pirating were too spectacluar for her to simply leave quietly and one day she got in over her head. Taking a ship hostage with an Americans on board, she had sparked the ire of that government, who stopped at no cost to try and capture or kill her. She managed to escape but now her identity was known.

She left and fled as far as she could, ending up in Japan. She missed the pirate life but knew she had to find a new way to live. She stumbled upon AFW. SHe was a pretty tough fighter and thought that she could earn a new fortune there. Most of the girls were skilled but she thought she could entertain a new form of pirating and loot it for everything it was worth.

Attire: Same as the picture except without all the jewelry, though she does keep the forehead piece if she can sneak it by the refs.

Fun facts:
-Fathia will not wrestle without making a pre-match bet of some kind. Even if the bet is small. She also has a big time gambling problem which probably explains why she is always looking for more money and never seems to have enough.

-She carries with her an 8-foot tall hard wooden stick with her called a donga stick which is used in the art of Surma stick fighting. It is hand made and one of her most prized possessions. It's about the only thing she won't wager a bet with.