» Saskia Schleswig-Holsten Vs Seo - Late Night Snuggles
by Nelv Today at 3:30 am

» Adventuring David vs Amazonian Goliath: The Rematch
by Mart-Kos Today at 3:22 am

"More sake!" Amaya called out with a laugh that rose above the rest of the loud voices inside the bar, earning the busty woman more than a few sideways glances that quickly turned into wide eyed stares once they found the source of the exclamation. At 38 years old Amaya was rapidly approaching that dreaded term "middle aged", but that had done little to fade the woman's stunning good looks and her more than ample chest remained as amazing as ever. Those she had kept in touch with since her days in the police force never failed to joke about how she must have found the trick to eternal youth when she caught up with them.

Tonight she wasn't out with any of them however, in fact she wasn't out with anyone except herself and the sake for tonight was all about celebrating her latest and greatest paycheck from the AFW. It was a tradition of hers, once a month after she had paid the bills and put away for Reina's college fund Amaya found her way to the nearest bar and spent far too much on the best alcohol availible in the place, and this bar's speciality was this heavenly sake that Amaya was now one bottle deep into.

Despite this being a night out Amaya was dressed far more modestly than what the other patrons would have probably wanted, looking very much adult in her blue top and purple jacket, the only real flair being the slightly too short skirt she had on along with the thigh high boots. The jacket didn't last much longer though as the sake warmed her up, Amaya tossing it onto the back of the chair and then stretching, giving those around her a good look at the cleavage her shirt showed off without the jacket to compensate. Tonight was going to be quite the fun time. 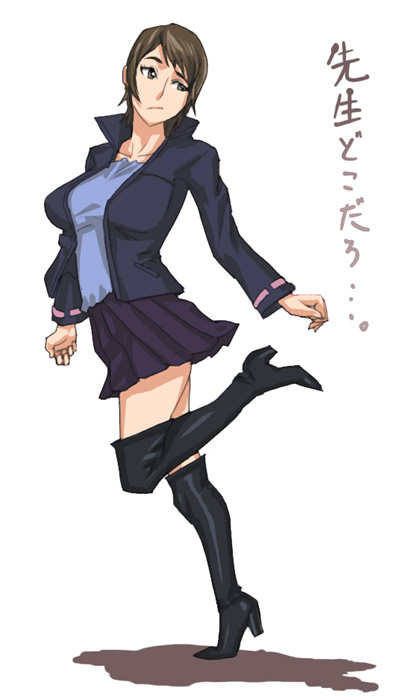 Maybe a drink or two would make this great evening just perfect and Yori just knew the place to get the right drink. The tall woman was stretching herself a bit and yawning out loudly. The most people in her age wouldn´t say the night was almost over but not for her. The Japanese woman just came from a great dinner with her daughter. The stomach of the blue haired woman was filled until the very top. Rina always had to overdo it, when it came to food. Although it was only a mother and daughter dinner Rina had to prepare a full meal with starter, main course and dessert. It was a wonder that Yori wasn´t rolling along the street.
Additional to the whole food the two women had they allowed them self a few drinks of Sake, Yori brought along. Unfavorably the bottle was empty pretty soon and Rina was already drunk after that little bottle. So Yori had to head out on her own, for another round.

Slowly the mature woman would open the door to the bar and step inside. Directly she was welcomed from a warm air flow and a friendly welcoming words of the employs. Yori would bow down before stepping inside and putting her shoes of. The blue haired woman would look around. Seems like she was a little bit to late every table around here was already taken from a group and Yori didn´t really wanted to sit to a group of strangers. But suddenly she saw that at one table one woman was sitting alone. This woman had brown hair and was pretty tall. From her age, yoir would say that she would be a good pair of years younger then the blue haired one.  Without hesitating Yori would walk over to the table and stop right next to the woman. “Konnichiwa.”, she would greed the other woman, while bowing down deeply. “It seems unluckily all the tables in this bar are already taken, and at your table if some free space. I wanted to ask if it would be okay for you if I would sit next to you. I would even offer you to pay you a round or two of drinks of your choosing!” Yori would then look at the other woman with a big smile, waiting for a answer.
_________________
X-Girls

The bar was particularly busy that evening, a lot of large groups having claimed every other table in the place, but the few who had come over so far in the hopes of striking up a conversation with Amaya had been flatly rejected leaving her all alone. Which was honestly what she wanted, at least this early on in the evening, as she was more interested in what laid at the bottom of this sake bottle than the guys who had come up so far. Which she was actually just about out of now that she thought about it, Amaya emptying the last of the sake into her glass with the intent of waving the bartender over for another. Only before she could another of the bar's patrons came up behind her, a woman this time from the sound of her gentle voice, and while she turned around thinking of sending her away Amaya paused when she got a look at her visitor. Blinking a few times in surprise Amaya gave the woman a quick once over, smiled widely, and nodded after hearing she would play for the next round. "Well as it so happens I am in need of another bottle of sake. So please, sit down and join me!" She exclaimed, waving the woman over to a chair across from her.

Whomever this was she had a body even Amaya had to admit was quite similar to her own, the quite busty beauty looking around her age or perhaps a few years more but no worse for it, like a fine wine that only got better with age. "If we're going to be drinking together then introductions are in order! I'm Amaya Tsuzuki."
_________________
The Many Characters of Daemongirl

Yori was pretty happy that the woman was welcoming her so warmly at the table, although maybe she was just looking forward to another bottle of sake. And the brunette was showing great manners by introducing herself to the Japanese woman. Yori would listen to what she had to say before smiling at her.
“Then it is my turn. My name is Yori Nazuka. It is nice to get to know you. Please call me Yori” The tall woman would smirk a bit at her drinking partner before bowing forward a bit, trying to get her mouth close to the ear of Amaya, Trying to whisper right into the ear of Amaya. “You know what is in order to drink together?” Yori would then slowly pull her upper body upwards. Then Yori would bend backwards and grab the shoulder of a small waiter girl and smile her right into the face. Normally it was a no go to touch any of the employs here, but YOri was so often here that it was okay for them.
“Hey Sarah sweet. Do me and my friend a big favor and bring us one bottle Sake… but please don´t bring us that cheep stuff, get us one of the good bottles! Thank you very much sweetheart!” After that the mature woman would let go of the shoulder of the small girl and she would directly walk into the back. “bring one of the big bottles… that will save you some walking!”, would Yori scream after her.
Yori would turn around and look at her drinking partner, looking at her. Also trying to look at her body while trying to not make it some kind of staring. She was looking pretty awesome!

“so can I ask you if you are from around here… I just moved here myself and now I am looking for some dirking buddies… maybe I found one… tell me something about you!” in that moment the girl would appear again putting a big black painted bottle of sake onto the table and also a small cup for Yori. On the black color of the bottle some Japanese letters were written in a gold color.
_________________
X-Girls