Search
Latest topics
» Meeting in the Hardstyle (For Cicilia)
by OmegaVan0 Today at 3:42 pm

» Putting Out Fire With Gasoline
by Berial Today at 3:41 pm

» Suzuki Adachi vs. Carmen Rodriguez - Blood in the Water
by acuya Today at 3:40 pm

Bully On Bully - Sandy Vs Toni!

Bully On Bully - Sandy Vs Toni!

Litter Box Match!
The ring is completely covered in a layer of kitty litter!
Victory can only be accomplished via deification humiliation followed by a pinfall!

Nya nya nya, what a waste of time this match would be. Toni didn't know much about who she was fighting but she was aware that she was a disgusting human, which was all she really needed to know. Were things really so bad in this organisation that this was the only person they could afford to put up against her? Really, it's not like the cheetah didn't already know exactly how this was going to play out. The human would be useless, the superior fighter would make her eat the litter before using her as her own personal box and pinning her, simple. Oh well, she might as well try and enjoy it as much as she could, after all, everything considered a win is a win.

When she was signalled to start moving the feline cautiously prowled out onto the entrance ramp on all-fours, she didn't wear a wrestling attire of any sort and was in her fur alone, as it was within her beliefs that clothing is a human thing, so she purposefully avoids it at all costs.

Without the slightest consideration for the opinions of the audience Toni soon made it to ringside, at which time she calmly clambered inside, stopping on the litter for a moment to appreciate the sensation on her paws. "Mmm. Maybe this'll be more fun than I thought." She muttered to herself as devious plans flooded her mind, her attention soon switching to the entrance ramp once more as she took a seat on the ground, waiting to see this useless human. 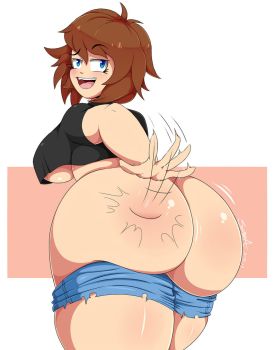 Sandy was intrigued by the match she was set up to take place in. It was a fairly odd set of rules but a match was a match. She was once again in a fur and feathers match against some non human creature but that was all she knew about her opponent. She would be wearing her usual outfit, A high cut crop top that barely covered her breasts and a skin tight pair of jean booty shorts. She had forgotten her boots today which seemed quite unfortiounate due to the match circumstances but she wouldn't let it get to her too much.

Sandy would hear her music begin to play as she made her way down to the ring, showing off her thick body and large assets. Once she made it to the ring, She would see her opponent. She looked like a cheetah which must mean she's very fast but she was much smaller as well. None of that mattered to sandy. She usually didn't get to humiliate her opponents to the degree this match would allow her but now that she was allowed to, She would take full fledged advantage of it.

Sandy made her way up the stairs and into the ring not taking her eyes off of her opponent. She would circle around the ring for a minuet trying to get used to the odd feeling of stepping on kitty litter. It felt weird as every step caused the supliment to sink between her toes.

After a few circles around the ring, Sandy would approach her feline opponent and stand mere inches away from her. She would have a not just confident but cocky smile on her face as she looked her up and down. "So uh.. you dont wear clothes huh? Well good! I like my toilet to be simple and naked. Once I'm done with you, I doubt you'll come back. I will be the source of your humiliating nightmares. I hope that tongue is nice and rough because thats how I like my toilet paper!" And with that, Sandy would send a punch right into the cat girls gut hoping to catch her off guard. If it worked, The bell would sound and sandy would attempt to knee the feline in the face before shoving her into the corner where she would attempt to send a barrage of punches into the cheetah's belly.
_________________
Shanecawfs heels and jobbers of your dreams

Upon first sight of her opponent Toni couldn't help but smile. Really? Like she was expecting somebody who looked pretty useless, but she didn't think that it would be this bad. Sure this woman had a decently thick build, and her god given assets were slightly impressive, but they would be far from enough to save her. In fact, with the cats own chest lacking in size by quite a fair amount, all Sandy's appearance did was turn up the heats of battle even further, making Toni really want to dominate her, and give her real lessons in how to be a proper wrestler, but perhaps more importantly, why humans were pointless and stupid.

Though she was originally feeling exceedingly confident and cocky, Toni was taken down a few pegs after Sandy began to speak to her, the felines smile dropping into anger as she stood up and balled her fists, her short fur already beginning to stand on end. Surely this human couldn't be serious!? She was going to come in here and speak to a superior like!? THAT!? Who did this idiotic trash think she was?! Now more than ever, this bitch needed to go down.

Bearing her sharp teeth, the cat fell for the trap which was set and decided the best idea was to mouth off rather than to prepare herself for a fight. "You think you're some kind of big girl do you?! Well you aren't sh-" Is about as far as the cheetah got in screeching insults when she was met with the unexpected punch to the gut, spit flying from her mouth accompanied by a choking gasp as she was practically bent around Sandy's fist, only freed once she was agonisingly kneed into the corner. "Nyaaa!!!" She shouted at top volume as she was so suddenly trapped in the corner with no escape, peppered with punches like she was a piece of gym equipment, her current chances of escape next to none.

Sandy would wear a nasty grin as she felt the saliva hit her face and chest from the brutal punch. Her grin would only grow as every following punch landed. "It's going to be a long long LONNNG light for you kitty kat!" Sandy would tease as she would send about ten more punches into the cheetah's belly before attempting to lift her to the top turnbuckle and suplex her off of it.

If this plan worked, sandy would attempt to weaken her opponent further with a leg drop across her opponents small chest hoping to knock all the wind out of her.
_________________
Shanecawfs heels and jobbers of your dreams

"Nyehh! Get off of me!" Toni complained out loud in both immense pain and frustration as she tried to force her way past Sandy and out of the corner, only to be abruptly denied her freedom and forced backwards into the turnbuckle once again by the seemingly endless punches which were sent hurtling her way, each one feeling as if it was more painful than the last. Feeling as if she was going to collapse under her own weight when Sandy finally stopped hitting her the feline wasn't given any time to rest and was instead treated to a surprise suplex off of the top turnbuckle! The height and cat littler in the ring doing nothing to help her massive fall as she was left completely sprawled out by the end of it.

"No... Fair..." The cheetah whined as she tried to make sense of the situation, her attempts at recovering from the brutal onslaught silenced temporarily by Sandy's leg drop, her smaller form practically bouncing off of the cat litter covered ground.

Sandy was very happy with how the match was going so far even though she had only landed a couple moves. She couldn't help but sigh contently as she landed the leg drop on the cheetah woman and loved the way it made her small form flop around on the cat litter ring. Sandy would stand up and preform a second leg drop, this one across toni's stomach. "Who said it had to be fair? How could it be fair? Putting a weak little kitty in the ring with a strong and sexy woman like me. They weren't looking for a fair match! They were looking for a sexy, humiliating, squash match!" Sandy would bellow as she stood up and would drag toni up by the hair as well.

Sandy would than Irish whip toni towards the ropes expecting her to show zero resistance. She would turn around and show off to the crowd while waiting for toni's return. Sandy was getting cocky and if Toni was able, this would be a great opportunity to even out the match.
_________________
Shanecawfs heels and jobbers of your dreams