Search
Latest topics
» Adventuring David vs Amazonian Goliath: The Rematch
by Mart-Kos Today at 3:22 am

» Muddy Relations
by BritBrat Today at 1:18 am

"Ladies and Gentlemen, welcome to the annual Random Wrestling Challenge event! Each year at random, we pick two wrestlers from the AFW roster and have them pit against each other at a random wrestling challenge. Our judges backstage have spun the wheel and the match selected is OIL WRESTLING! and the two participants involved are...Tension's DAISUKE TAKEUCHI and the second wrestler is......Friction's...JULIA HIROSHI!! Alright the stage is now set, we've set up the mats in the special wrestling room for the two wrestler's and provided oil wrestling bottles there as well. The wrestler's have been informed of the match type and their opponent's now we await the two for some words and the pre-match interview of the two opponent's oiling each other up before they go one on one".

The prince was in his own private locker room, thinking how in the heck did he get into this with a friction wrestler? Still, this was a wrestling match and he was contractually bound to wrestle in any match-type he was put into. Daisuke begin prepping for his match as he took a nice warm shower before stepping out of the showers and drying himself off. He then proceeded to put on his CK grey wrestling briefs, since it was oil wrestling there was no point putting on boots or any protective ring gear. He hung his towel over his shoulder before walking out the locker room towards the interview crew, who were just waiting outside their special wrestling room.

The room was matted up, with bottles of oil on each corner of the mat and two in the middle, perfectly big enough for two wrestlers to have a nice steamy match in their. As Daisuke walked to the crew, he stood outside the door and shook his head.

"Ah Daisuke, you're here! So how do you prepare for a match like this against Friction's very own gymnast?" the interviewer would ask. "Hmph, well I doubt it's going to be much different from any other match. I don't think Julia is a tough enough wrestler and I am certainly confident I can make her tap, I wont even need to break a sweat"he would grin confidently.
_________________
Tension:

Julia was almost done getting ready for her match. It was going to be the second oil wrestling match she was in and the gymnast was less than thrilled. She would don a bikini that was reminiscent of her normal neon blue and purple attire. She just hoped that the oil wouldn't mess with her hair dye. 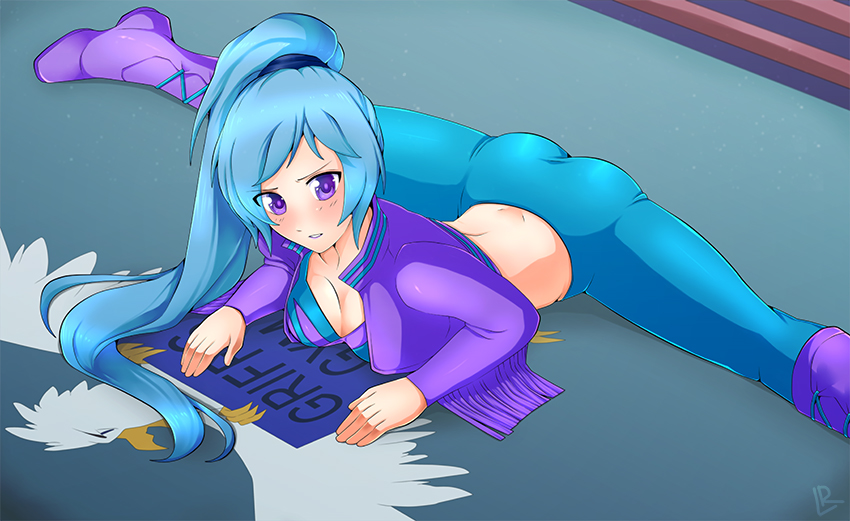 "Ugh it's gonna be all messy and slippery. How am I supposed to lock in a hold!" She fumed as she left the locker room. This type of match was a detriment to her style but regardless Julia was determined to persevere. An interviewer must have overheard her as soon a microphone was in Julia's face. "So, do you think the oil will mess with your style of signature submissions?" They asked to which Julia just huffed. "Yes...A lot. But I'm still gonna give it my all and WIN!" The gymnast declared.

Julia quickly walked to the mats. The one thing she did like was there wasn't a crowd present to laugh at her when she inevitably slipped and fell. Maybe the match would be more fun than she thought after all.
_________________
Noob's Cavalcade of Combatants

As the wrestling prince waited patiently for his opponent, soon she would make her way to the wrestling room where their match was supposed to take place. She looked rather concerned about the match type but when asked by the interviewer about whether the match type would ruin her style, she replied with an affirmative  but backed it up that she had planned to win this match.

Daisuke walked up on the mats next, there was no crowd so perhaps that was a plus to both wrestlers, it was just going to be the two of them locked in the room for a one on one wrestling match in the oil. "So you're Julia huh? Well, I guess you're my opponent then..." he would say as he stretched his arms and leg a bit before walking up towards her.

"So are you ready to lose this match? Oil wrestling or not, I don't plan on losing to you Jules. I suppose we should oil up huh?" he said as he extended his hand for a handshake before their match would start.
_________________
Tension:

As Julia approached the mats she saw Daisuke, her soon to be opponent. Extremely impressed with his appearance her jaw almost dropped for half a second. "Uhh...ummm yeah." She mumbled as he addressed her. It was a rare moment but the bluenette was left speechless as she looked her opponent over. She was brought back to normal though as Daisuke continued to speak.

"Lose? Hah yeah right. I'm gonna kick your butt all over the mats." The gymnast said with renewed gusto. Losing was the last thing she would think of doing today. "But yeah. We totally need to oil up." She nodded quickly, getting a bit more excited for the start of this match now. The gymnast quickly grabbed some of the oil and covered her hands with it as she got ready to get down to business.
_________________
Noob's Cavalcade of Combatants

His taunt's seem to snap her out of the trance as well as she became more lively, ready to kick his butt. Daisuke nodded as he approached her, thinking of a plan to unsettle her nerves further on. "Hey hey what are you doing? Geez...this is oil wrestler. As per oil wrestling traditions, wrestlers have to oil up their opponents" he said shaking his head as he approached her face to face, "Come on now, hand over that bottle of oil"
_________________
Tension:

Having just won her first oil wrestling match, Julia thought she was pretty familiar with how they worked. She didn't have to oil up her opponent previously though so that was a pleasant surprise. "Oh Alright. Gotcha!" She said with a wink. The gymnast would then bend over for a bit longer than necessary while she got the oil from the floor. Julia tossed a bottle to Daisuke before opening one herself. In the 'spirit' of traditional oil wrestling she would make sure to get her opponent all oiled up.

Julia took too steps towards Daisuke before raising her hand and dumping half of the bottle over his head. She would giggle as it ran down his body. "Sorry haha couldn't help myself." She apologized. For whatever reason the bluenette just found the whole oil wrestling thing quite funny when it wasn't working against her.
_________________
Noob's Cavalcade of Combatants

As Daisuke tried to explain the rules to her, she would seem rather relaxed with his request and replied with an affirmative and a wink before bending down rather provocatively to grab another bottle of oil while tossing one to the wrestling prince.

Daisuke raised an eyebrow, not sure what she was upto until he felt the oozing drip of oil on his hair as it poured down onto his neck, chest and all over his body. "H-hey!?! T-that's not what I meant....geez." he would say shaking his head and rubbing his hand all over his body to distribute the oil well around his chiseled frame while massaging his hair as well.

Julia watched intently as Daisuke oiled up. The gymnast didn't quite make an effort not to stare. She didn't understand though what she did wrong. From the looks of things she helped the process go along much faster. She quickly realized though that she didn't have any oil left for herself and would have to wait for Daisuke to share.

It wasn't long before that problem was solved and Daisuke dumped the oil onto her head. "Two can what now?" She'd ask before yelping and letting the oil drip down her. She just glared at Daisuke, almost like a scolded child who just got what they deserved. "...Oh...fine...I deserved that." She said, trying not to crack a smile but quickly failing. The bluenettte would start rubbing the oil over her body in preparation for the match.
_________________
Noob's Cavalcade of Combatants

Daisuke oiled up well, his chiseled frame glistening in oil now as he noticed his opponent looking at him, "Hm? what?" he said as she kept staring at him, for obvious reasons! He sighed then shook his head, looking for some payback he dumped the oil over her head as well, getting both their hairs rather damp and oily as she glared at him for a while before relaxing and beginning to oil herself up as well.

"Yeah, you kinda did. Now come on, let's wrestle so I can get this easy win in the bag" he would grin as he got down onto his knees and raised his arms up to his shoulder level, looking to start off in a knee grappling position as he waited for the bluenette.
_________________
Tension:

Julia made sure to oil herself up nice before getting down on her knees. She had a feeling she might need to be slippery if she was going to beat Daisuke. Since her opponent was larger than her she would try to focus on speed and strategy rather than power. "Easy win? Hmmph! We'll see how easy it is when I have my legs wrapped around your neck." The bluenette pouted. She didn't appreciate being taken so lightly by her foe. He hadn't even seen what she could do yet. She'd be sure to show him though.

Not wasting any time, Julia would immediately try and pounce on Daisuke in an attempt to push him onto his back. "Haaah!" She yelled as she charged forward. The gymnast hoped to surprise him since she assumed overpowering him was off the table.
_________________
Noob's Cavalcade of Combatants