» Shibita Aruku vs. Peggy McIntyre
by GreatForce Today at 1:14 am

» Nanami Tomonari vs. Emily Nelson - Underworld vs. Highland
by Underdog21 Today at 12:32 am

» Jason Reed Vs. Eliza Wakefield: An Unlikely Beatdown
by WrestleMind Today at 12:13 am

Eh, saying Braun would have mainstream appeal is a bit iffy. For starters, how over would he actually have gotten if he hadn't been beating the shit out of Roman Reigns all of 2017?

Plus I can't see Strowman being much of a media guy, Romans in a better spot to be the media guy they want their champion to be.


That being said, serious props to Braun Strowman, in 2015, all ANYBODY was saying about him was that he was a green as grass big muscle guy with absolutely zero business being in WWE, especially at a time when people were still creaming over getting Owens and Zayn and Itami and Finn onto the roster.

Now people are debating if he could really be the next big mainstream star, that's fucking impressive.
_________________
Check out the recently revamped Roster Page, now with pics!

It is all a matter of presentation.

*If the Miz had stayed relevant his whole WWE career, he would be a candidate for the main press guy of WWE. He will never fully please hardcore wrestling fans, but that group is obviously not the majority.
*Minus his moustache, Rick Rude was the most defined and good looking wrestling guy that I have ever seen, the man was basically a living statue. He was also a rather competent wrestler and jack of many trades regarding styles with lots of experience. I am pretty sure that he would be a huge womanizer and addvertising star today if he had still picked a random woman out of the crowd and attempted to swoop kiss her like the soldier and the nurse from WWII.
*A gold medal always draws. Kurt Angle is also a very good performer, but the medal alone will draw in a nationalist country like the USA. Imagine if Carl Lewis had found his love for wrestling, people would have burned down the walls of a hall to see him from afar.
*John Morrison had many things going for him. Good looking, flashy entrance, flashy performance. Let him be the Shaman of Sexy not only by the word of a middle aged commentator but with gorgeous women at his side in video clips where he sits in the Lotus Seat on a cushioned palace as a hippie guru and watch the money flow in with commercials. When Shawn was featured on the cover of Playgirl, people of both genders were unstoppable in buying it. Morrison could have gone a similar way.

WWE simply dfoes not want these people to shine more than the brand, backstage politics also play a role I assume. Of course they would jump ship sooner or later then, but in this way WWE will never rise from being a soso sized brand who holds people down. Mainstream appeal comes with a prize and hard work.
_________________
Friction:
Tessa "Harrier" Price
Barb Wire(Tag Team)
Kelly "Pony" Flowers(Kawaii)
Anja the Raven
Amaya the Maiko(Kawaii)
Senior Officer Ise
Gina "the Brat" Lees

Miz pretty much is the personification of a WWE guy, and while he may not be the top star of stars, he does plenty of media for them as is and could do more if they ever chanced giving him another run on top.

You clearly aren't paying attention to the social issues of the USA today if you think Rick Rude, or someone doing a Rick Rude gimmick, would actually work in WWE today. Handpicking women out of the crowd and trying to force a kiss upon them would get WWE MAJOR heat with mainstream media, they would be crucified, and considering the reasons behind the #metoo and #timesup movements, it would just be in poor taste. Sure you could argue the character could make a good heel, but thats not the kind of heat you want brought down on you.


The fact that your saying HBK's playgirl was a major seller implies that you actually looked into the statistics of HBK's Playgirl issue...which...I mean...why would you look that up? Also, it's a PG show. Morrison in Playgirl would be a no go. Also, Morrisons own ego held him back as much as anything else, dude was/is known to be a bit of a prick to deal with.
_________________
Check out the recently revamped Roster Page, now with pics!

I thought of this as examples, not something to copy 1:1, should have made that clearer. I made the refence with Shawn because I had at this time no idea that a magazine like Playgirl even existed.

If memory serves me right, Rick Rude never forced women to anything. He would invite them in the ring and offer a kiss which he most of the time still did not pull through. None of the women seemed terrified, degraded or something like hat. Maybe they were also picked before or planted, but maybe you will agree with me that this is a direct interaction a sport and entertainment thing like wrestling is suited for. The whole act was so much PG that you could show it on many conservative meetings without many eyebrows raised. You could make it like an announcer letting interested women take part in a lottery before the event with a short live trailer showing which number is picked and how the woman is excited and stuff. Wrestling is exhibitionism and the appeal of combat up to a certain point anyway. Nobody is talking about the kiss my ass club or woman with more silicon than a certain valley barking on the lap of a CEO.
And as we are speaking about degrading and PG, how PG is it to douse a helpless man with barbeque sauce?

HHH and the Rock were on the cover of bodybuilder magazines multiple times. Muscle and fitness has a distribution of 320K per anno. Not exactly mainstream if you ask me, just about fitting for a company the size of WWE. Really big magazines(People, 3.7 million readers) or feeds will feature you if you are presented like main stream material like the Rock, not because you are the CEO of WWE. The Rock had to kind of break free of WWE to become this big. Cena could be on a similar way lately. Run with your guys, do not throw sticks between their legs. The Rock could have also chosen to shit on the WWE after his contract ended, WWE was lucky at this point.

Why be surprised? It is the message WWE always sends with retired legends, they are better than the current superstars. Exhibit A: The Revival was humbled. If you still compete more or less regularly, you are just old and washed up.
_________________
Friction:
Tessa "Harrier" Price
Barb Wire(Tag Team)
Kelly "Pony" Flowers(Kawaii)
Anja the Raven
Amaya the Maiko(Kawaii)
Senior Officer Ise
Gina "the Brat" Lees

It's not a good sign when your announcer's fall asleep during your wrestling program. 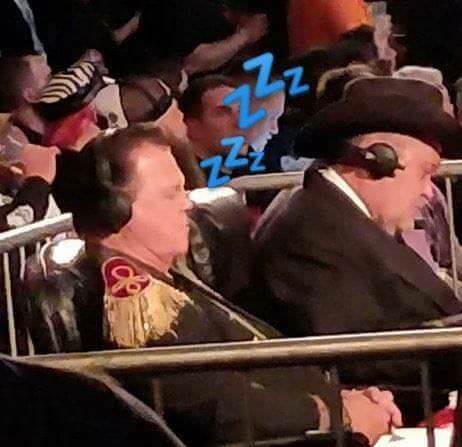