Strategy: Aka-Oni is a wrestler who favors strikes and aerial maneuvers, though she does have a handful of throws and holds in her repertoire. Aka-Oni has no complicated strategies in matches other than beating the crap out of her opponent, though she often makes use of her agility and speed to overcome her opponent. Also, she enjoys taunting and making suggestive comments to make her opponent uncomfortable so that she can take advantage over them.

As one half of the tag-team Onigashima, Aka-Oni works in synergy with her partner, Ao-Oni. While Ao-Oni is a powerhouse who favors power moves, Aka-Oni is an agile brawler who utilizes strikes.

Style: A striker and high-flyer who seems to utilize strong-style moves and lucha moves, though still pretty balanced.

Type: Spunky and spirited, and can be sharp-tongued compared to her partner.

Preferred Attacks: Quick strikes like chops, kicks and punches, over-the-top-rope maneuvers and some basic holds and throws. Can also utilize illegal moves if feeling like it. 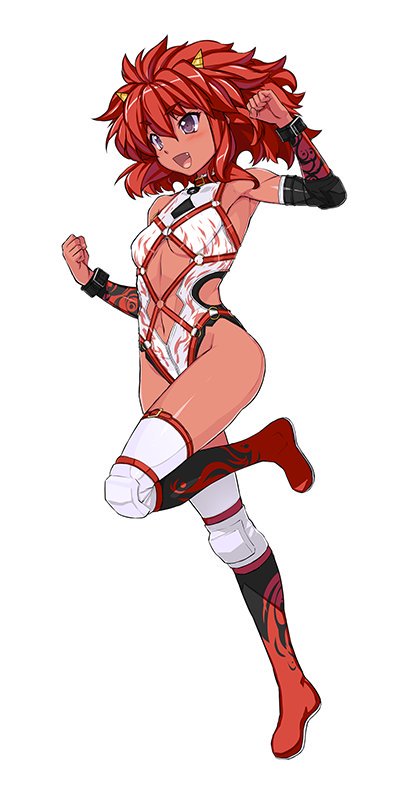 Personality: Mischievous and cheerful, Aka-Oni is the red oni in the dynamic of her tag-team, Onigashima. Very emotional and rambunctious, Aka-Oni is a very passionate wrestler who loves professional wrestling. While she does have vindictive streak and can be a little cruel whenever she feels like it, Aka-Oni is generally respectful to her opponent as long as they are respectful to her.

Despite her cheerfulness, she does have a little bit of darkness in her. She has a little bit of inferiority complex, feeling herself inadequate compared to other wrestlers. This often leads to her overworking herself while practicing, which can be detrimental to her physical and mental health. But the effect has been lessened thanks to the help of her partner.

Outside of the ring, Shizuka isn't all that different compared to her in-ring persona. Though she is more subdued in public and will rather leave the matters of the ring in the ring altogether.

Past/History: Shizuka Takamachi was always interested in wrestling ever since she was a little girl. Her parents did not approve of her passion, but they did not actively discourage her either. During high school, she made a Pro-Wrestling club with the help of her best friend, Yukari Tooru. They had been practicing wrestling moves in the club, and they often pictured themselves wrestling in big wrestling promotions.

Upon graduation, both Shizuka and Yukari parted ways for a while. Shizuka got enrolled into college while Yukari became a part-time model. One day, Shizuka and Yukari stumbled upon each other after being away from each other for two years, and their love towards wrestling rekindled. Through a series of events, both of them were scouted by an AFW scouting agent, and they were offered a contract to wrestle under AFW. Seeing this as their golden chance, both Shizuka and Yukari entered AFW, making a tag-team, Onigashima, with Shizuka naming herself Aka-Oni.

Crushes:
-A senpai at college

Re: Aka-Oni of Onigashima