» Freedom or adoption: Cattleya + M-cup maidens Vs. Ryu & friends
by The Riders Today at 5:41 pm

Maria, Elena's sister is sure that Emiko is used to having a walk on that parc on saturday afternoon, so there is a good chance they can find her now. Elena got several of her social media hacked, and Reiko admitted doing it. The last time Maria confronted her about it, Reiko answered her she didn't want any money nor want to ruin her life, but she wanted to keep access to her accounts because she thought it was funny. Maria has been thinking for a few time about what to do, she couldn't confront Emiko directly, knowing that latter has some wrestling background, however her own sister is in the AFW, and a huge fighter.

This is why both women are here now, with her sister Elena in order to confront that clever girl.
"That's her! That's her!" Maria suddenly yells to Elena, who then head up to the pink haired girl who is reading on the grass! The Russian bodybuilder then says "Is that you Reiko who hacked my sister's accounts??" She asks , standing tall making her look even more impressive at 6'5 tall and 180lbs of pure muscular strength, staring down at the Japanese woman.

The Japanese woman stood up, being a full foot shorter then Elena and weighing only 118 pounds. She looked up at the Russian woman with a smug look on her face before opening her mouth. "So what if I did hack your sister's accounts?" 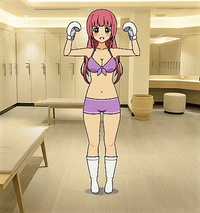 Elena stares as the pink haired woman stands to face her while her sister is looking at both of them. Even with the huge size and strength difference, Emiko doesn't seem to be afraid, and she speaks calmly.
"Well you're going to stop doing that and give me my accounts back! And how did you manage to do that? I had a good password! If you don't stop, my sister will kick your ass!" Maria answers before Elena has the time to do it, while that latter keep staring down at her opponent

Emiko answers Maria casually while still staring down Elena. "Passwords don't mean a thing when you have a password decryption program, designed by yours truly. I refuse to leave your accounts alone, you know what you did. Your sister doesn't scare me either."

Maria gets angrier as Meiko just keeps on her position while still being calm and polite, even gentle. "You'll give them back to me! I want them back!" Maria answers in frustration "Come'on Elena!" She then says at her sister.

The Russian bodybuilder would then put her hands on Emiko's shoulders while crunching down into a grappling stance, as she would then push hard, willing to use her impressive strength and size to try to force Reiko to step back, attempting to bully her backward in a one-sided test of strength

Emiko got pushed back onto the floor, easily being overpowered by Elena before getting back up and trying to push Elena back.

Elena starts pushing her opponent while that latter is being overpowered "Get her!" Maria yells. Reiko quickly gets back onto her feet and start pushing back at Elena.
The Russian bodybuilder would then try to wrap her arms around Reiko and attempt to life her up high onto her shoulders, trying to have her opponent laying accross her while being lifted on Elena's shoulders

"PUT ME DOWN!" She yelled, trying to punch Elena while being lifted onto her shoulders .