Though she may be a foreigner to the wrestling ring, her strategy changes little in these circumstances. She has a number of grapples and simple throws that she can take advantage of that are best paired with her offensive nature. She’s a striker through and through, but will play a touch more conservatively to avoid pesky grapples and the like.

Finishing Moves:
Gargouille - A cross counter intentionally designed to open her opponent’s guard. The instant their strike lands, Margaux will riposte with a lightning-fast cross to their throat. She will follow this up with a series of relentless uppercuts, following her opponent until they drop.

Frôler la Mort - A brief glimpse into her graceful nature. Margaux will whip a tired opponent left and right before tucking them close with a dip, effectively dazing them. She’ll tenderly brush her victim’s head before twisting her body and throwing them harshly to the canvas with a sleeper slam.

Spoiler:
Possess a tough exterior lined with trained, resilient muscle. Her main diet, however, consisted of scrappy dropouts and street vagrants looking for a challenge. Her limits are bound to be tested in this federation.

Spoiler:
Throws her entire weight into each and every one of her attacks without a second thought of the outcome. Absorbing the shock alone is enough to rattle the victim’s bones and will eventually rip through their guard like wet paper. Underestimating this statistic is a deadly mistake.

Spoiler:
Lightning fast strikes with the footwork to match. As she gains momentum, it becomes increasingly hard to escape her flurry with anything short of a well-timed counter.

Spoiler:
She can get out of most wrestling holds and grapples with some effort, but she has a nasty habit of letting the pain sink in before getting free. She’s gotten used to the taste and it spurs her on like few things can. Whatever motivation it works for her mind, however, nevertheless leaves an impact on her body.

Spoiler:
A deadly striker that can make her fists dance in front of her opponent’s eyes. Adept in virtually every aspect of boxing even without with her trademark ferocity. What few wrestling moves she’s learned have been picked up by, and practiced on, her loyal followers. They compliment her style well despite her inexperience.

Spoiler:
A cruel boxer with brutal punch combinations delivered with the intent to maim. Her lack of professional experience is made up for with her speed and force alone.

Spoiler:
It's not her forte, but there a few choice holds that she picked up for the sake of...experimentation.

Spoiler:
Don’t let her elegant appearance fool you. Margaux can and will slam anyone she has to if she’s confident it will make them scream.

Spoiler:
Punishes her opponent with brutal counter punches and has a nasty habit of cheating her way out of holds. Pinning her down takes effort, but is a good way to stop her momentum.

As time passes, however, or one has the utter misfortune of meeting with her alone, the real horror becomes much more apparent. Her sweet facade hides a twisting labyrinth of sinister intent and malicious gratification. Subjects that hold her particular will find themselves inescapable from her attention. To her, people are like delicate sweets. The stronger they are, the better the taste. The only thing she believes in is violence. Those that adopt a similar philosophy may find a kindred spirit somewhere within this dark soul.

In the ring, the journey for her is far more important than the destination. Wins or losses she is surprisingly indifferent towards. So long as the fight has been enjoyable, victims may come and go as they please on good terms. As such, her insatiable bloodlust explains her abject refusal to participate in standard matches.

Appearance: In the ring, she sports the standard boxing shorts and sports bra, foregoing gloves in wrestling matches. When stalking the backstage areas or public events, she takes a more elegant approach, wearing a cropped jacket over a hip-exposing corset, paired with brown pants, high heels, and a multitude of necklaces. Elsewhere, she prefers making herself appear a lot more innocent, taking up a collared shirt and skirt. Almost never seen without her umbrella. 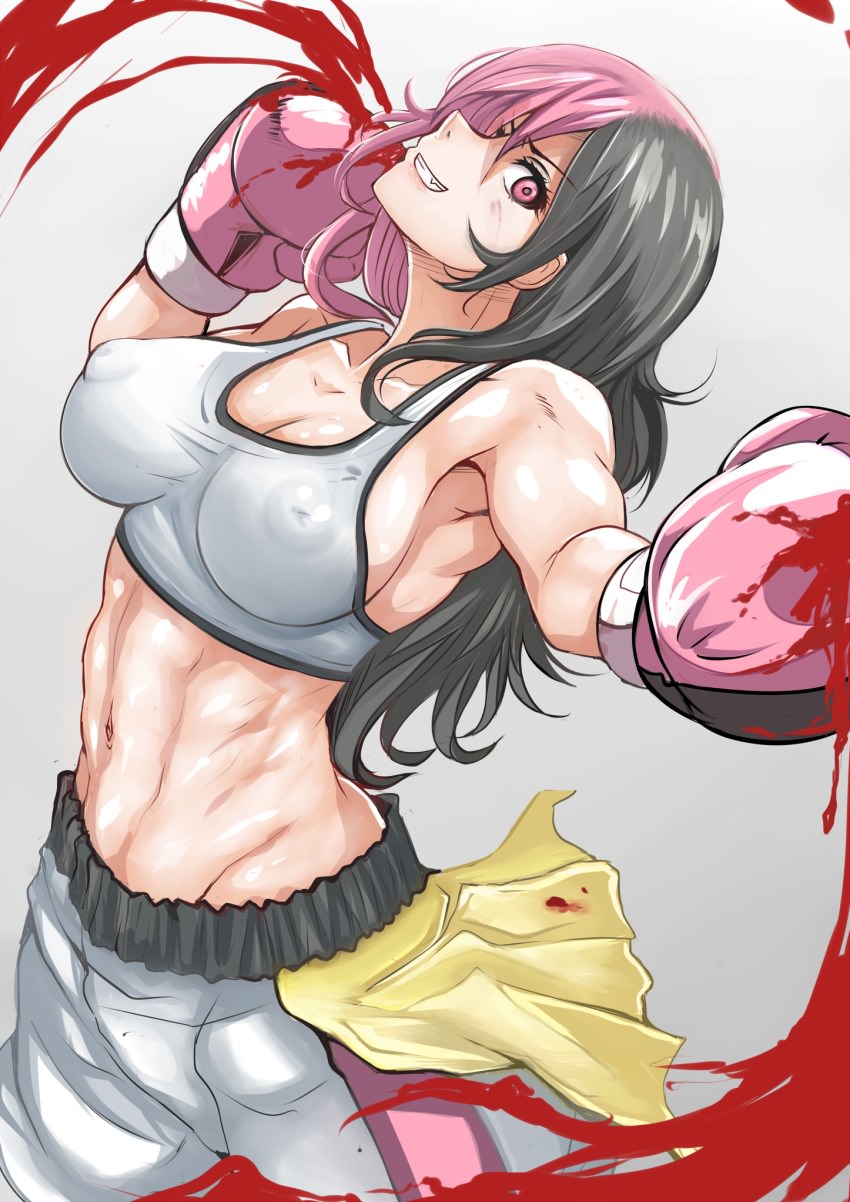 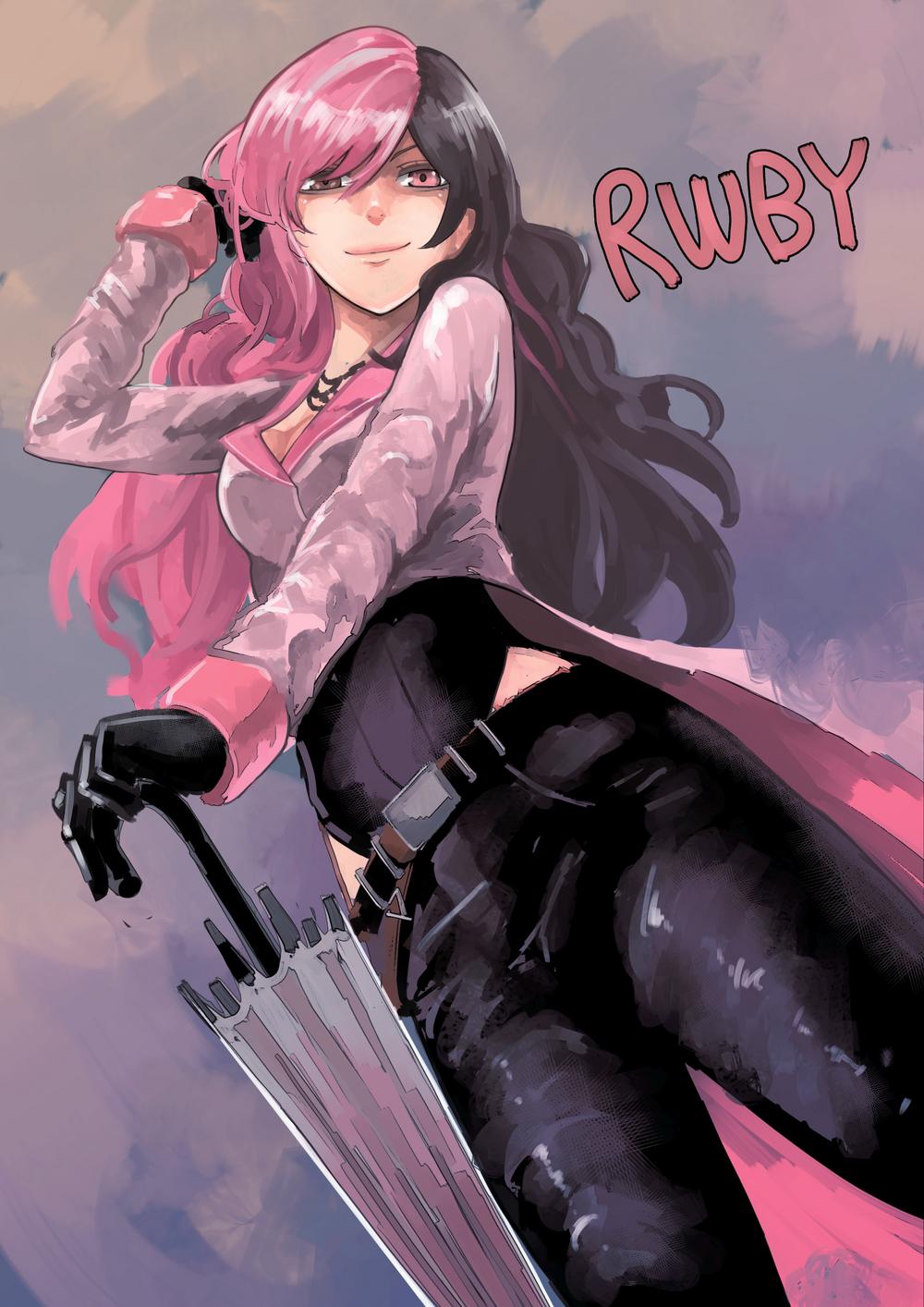 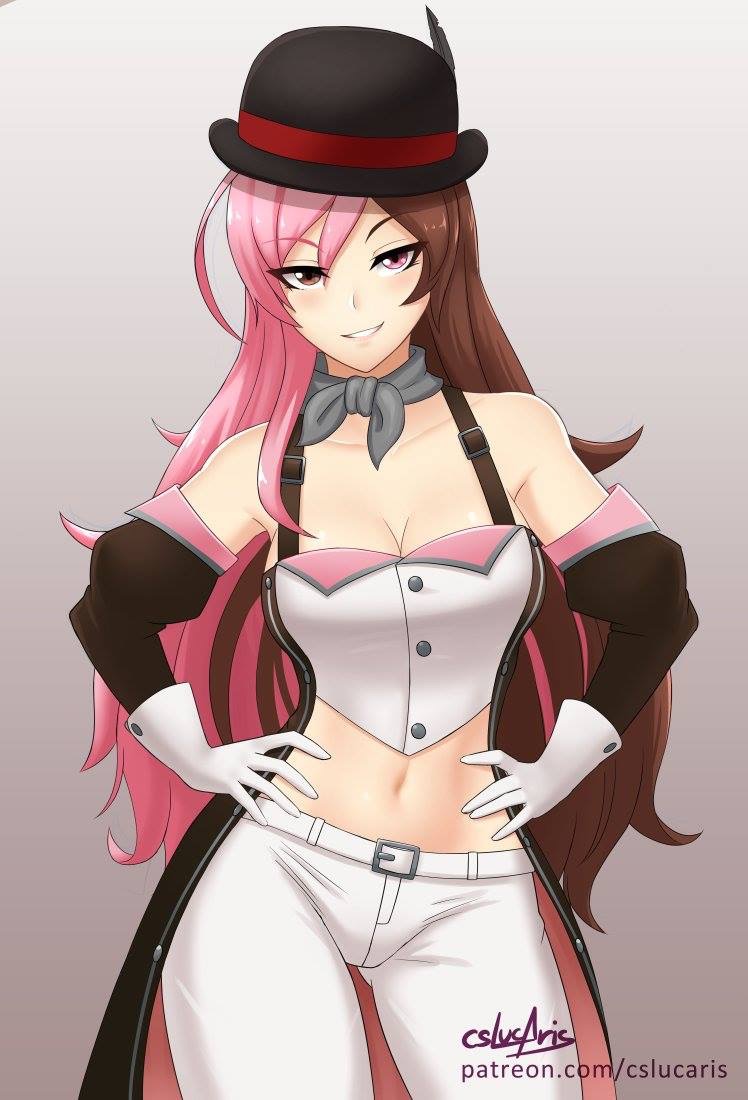 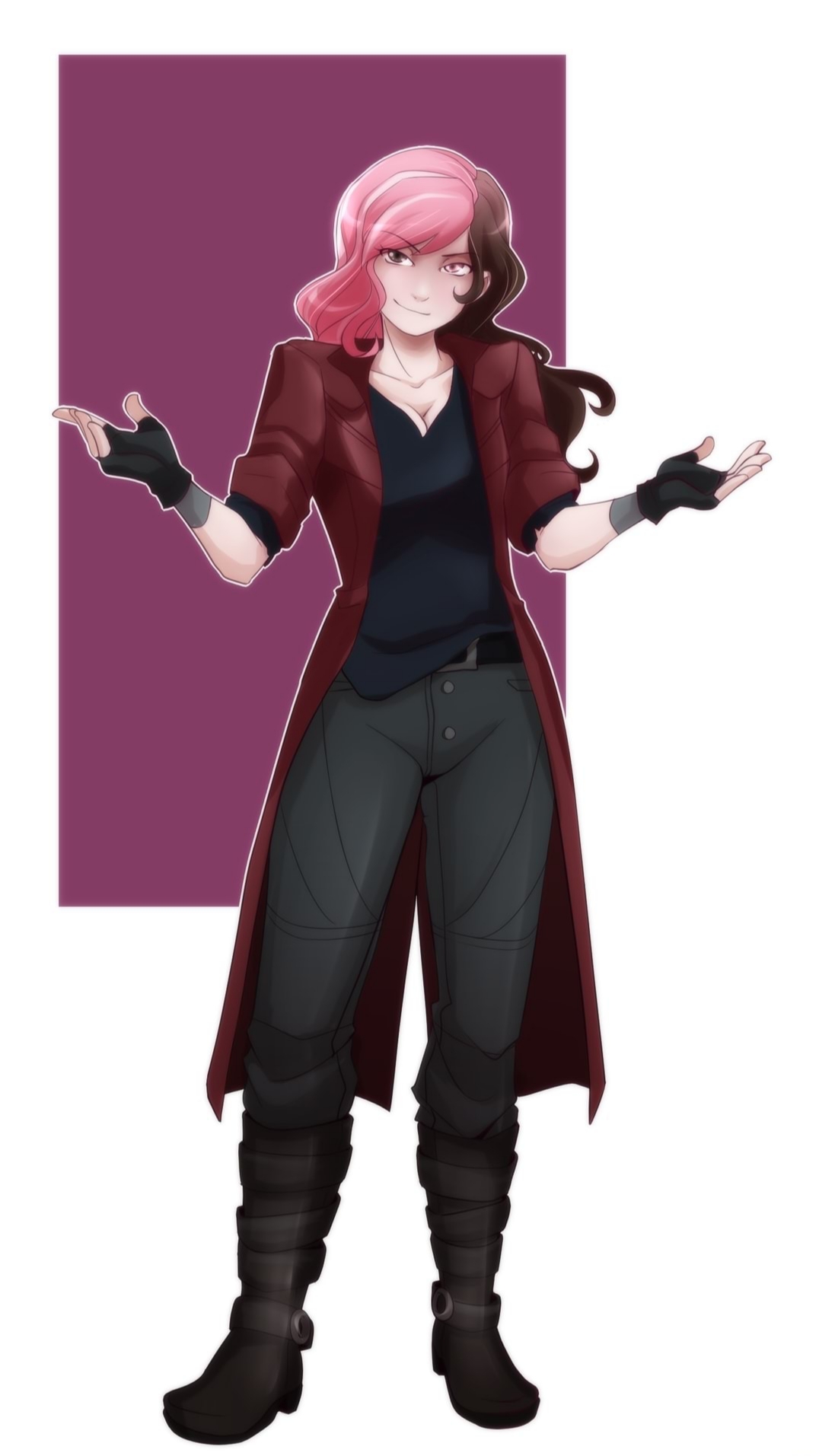 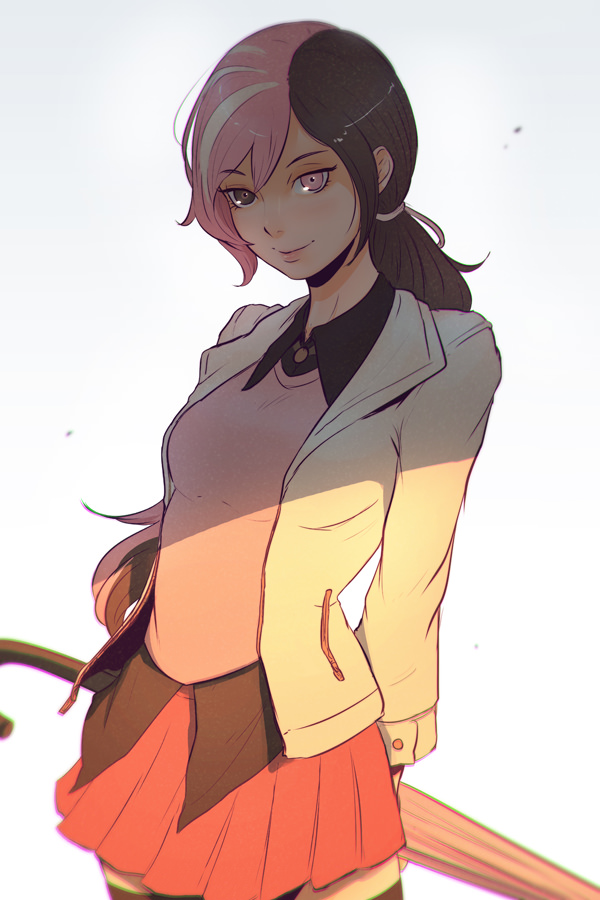 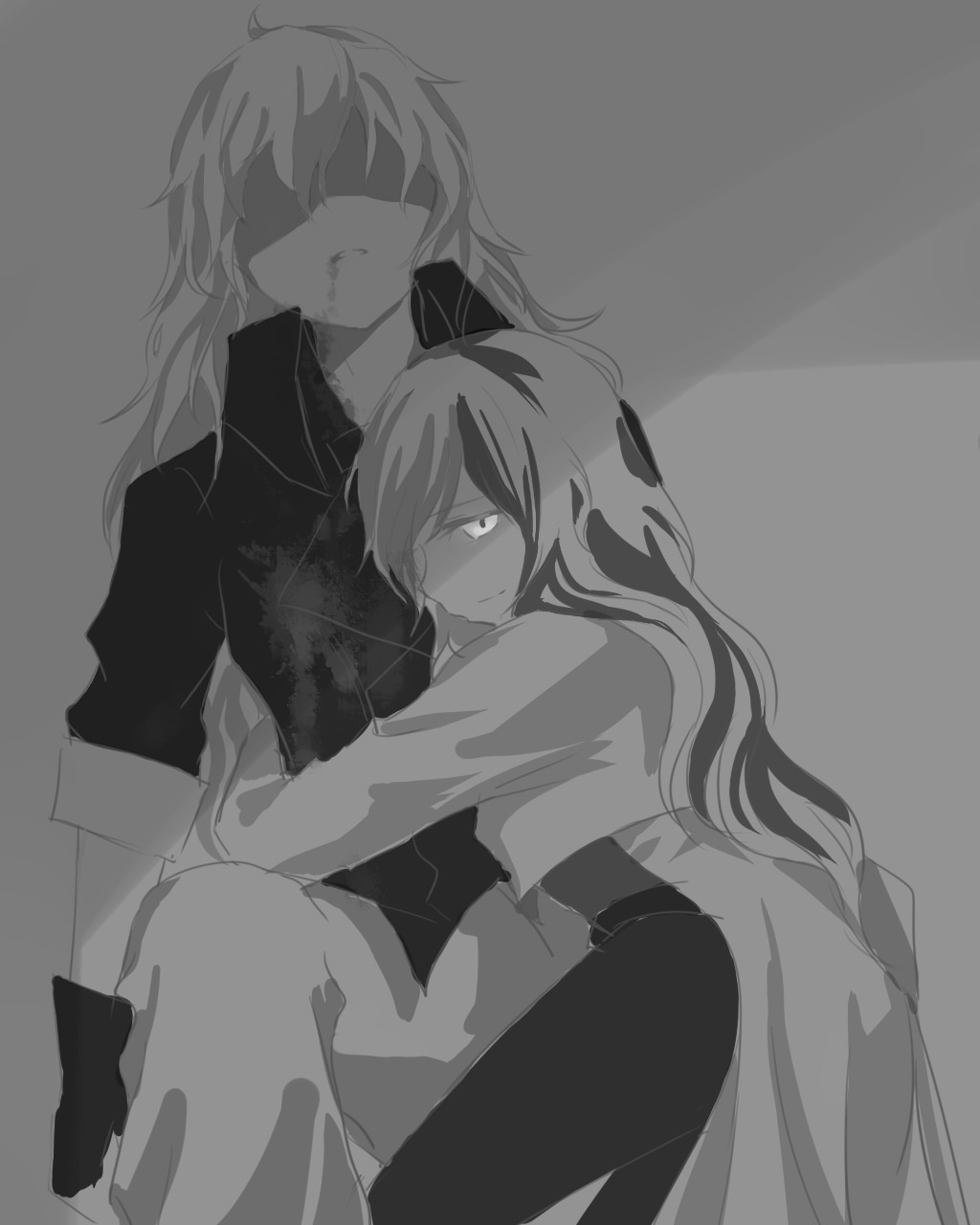 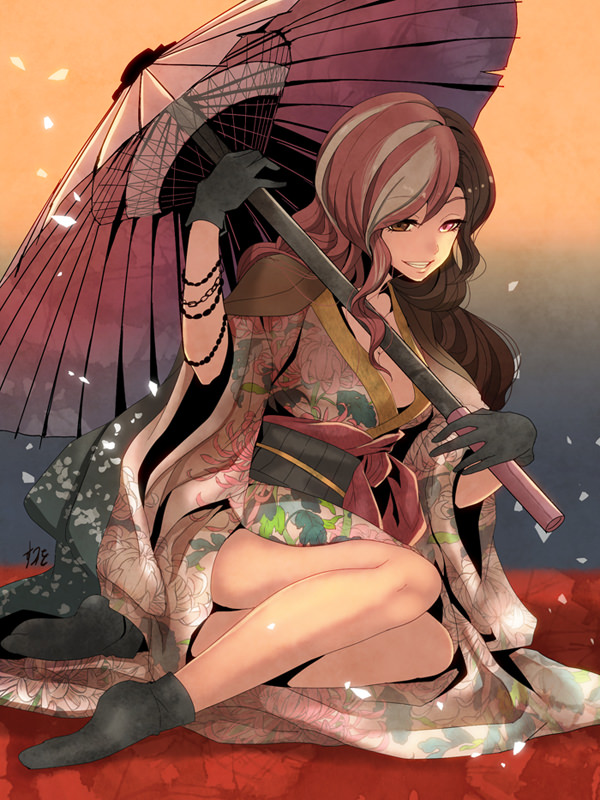 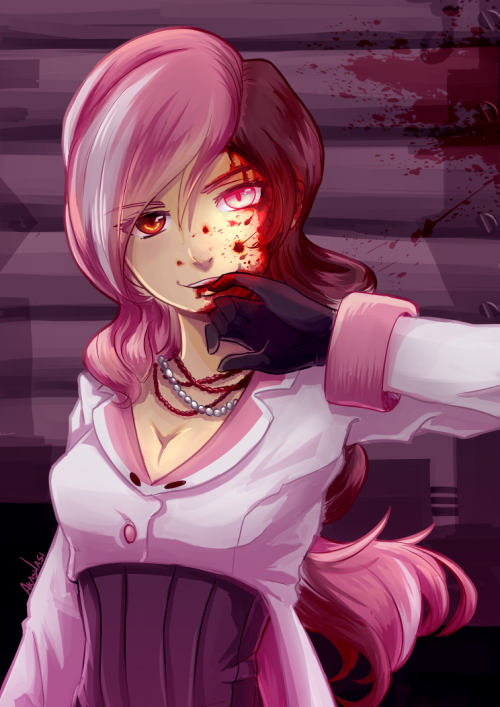 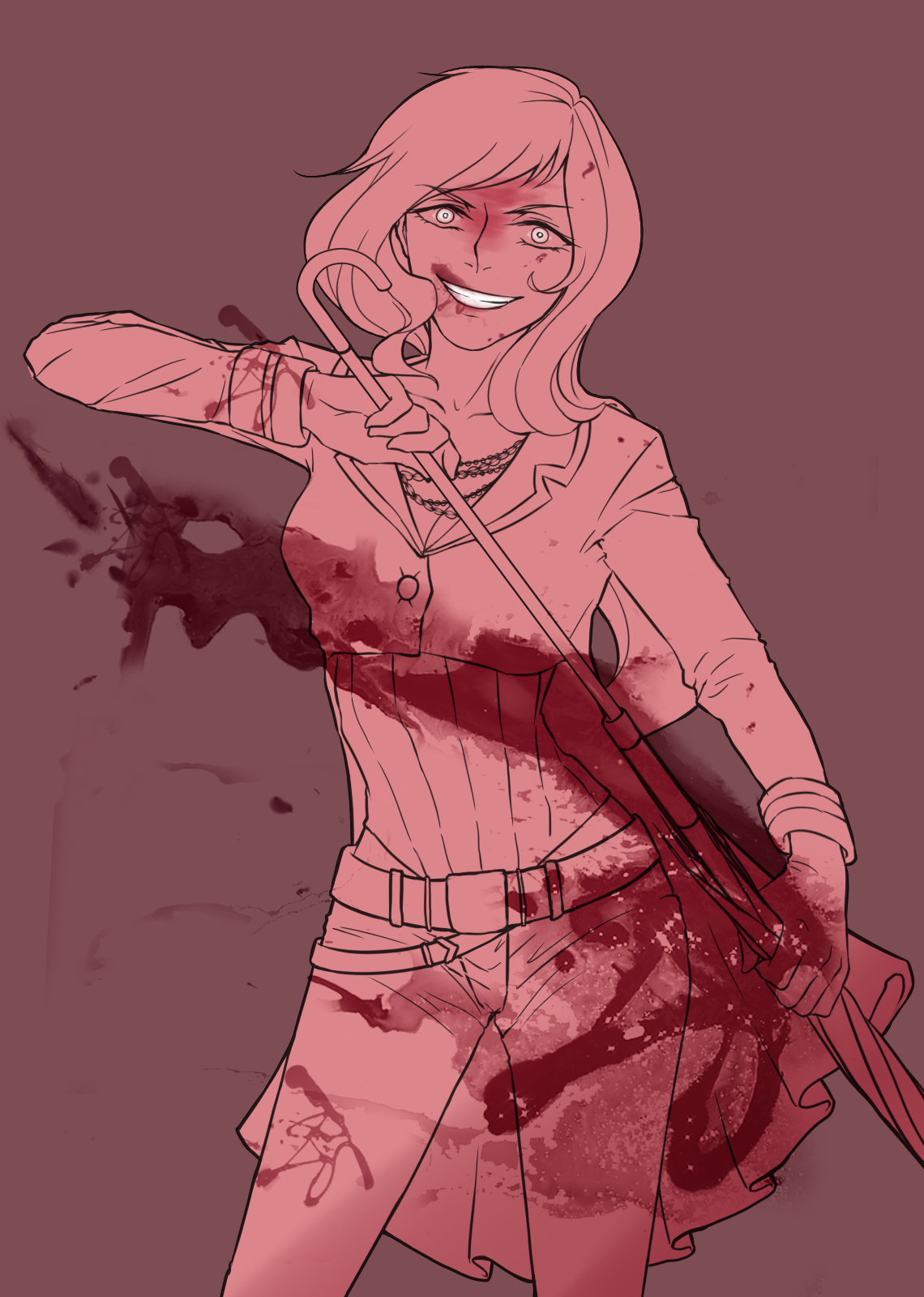 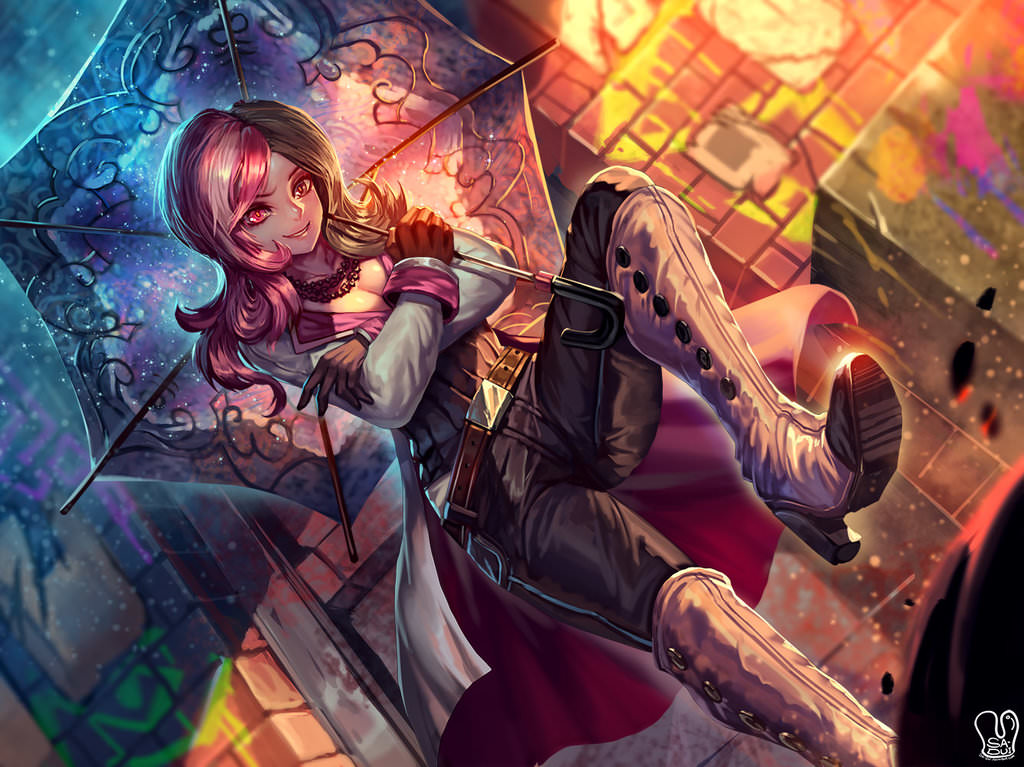 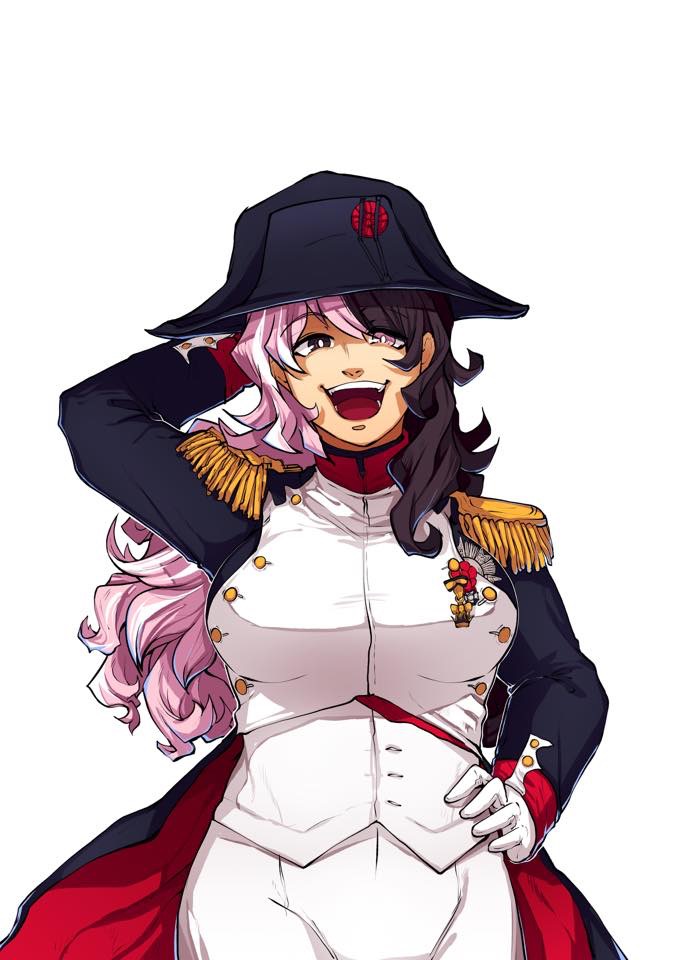 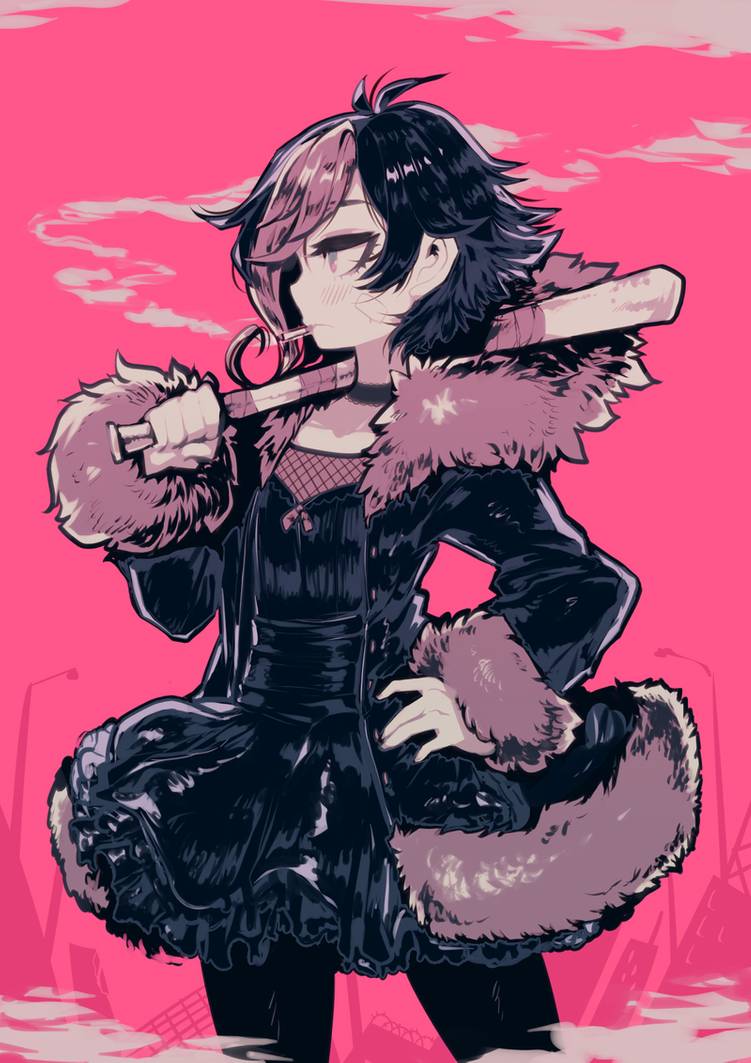 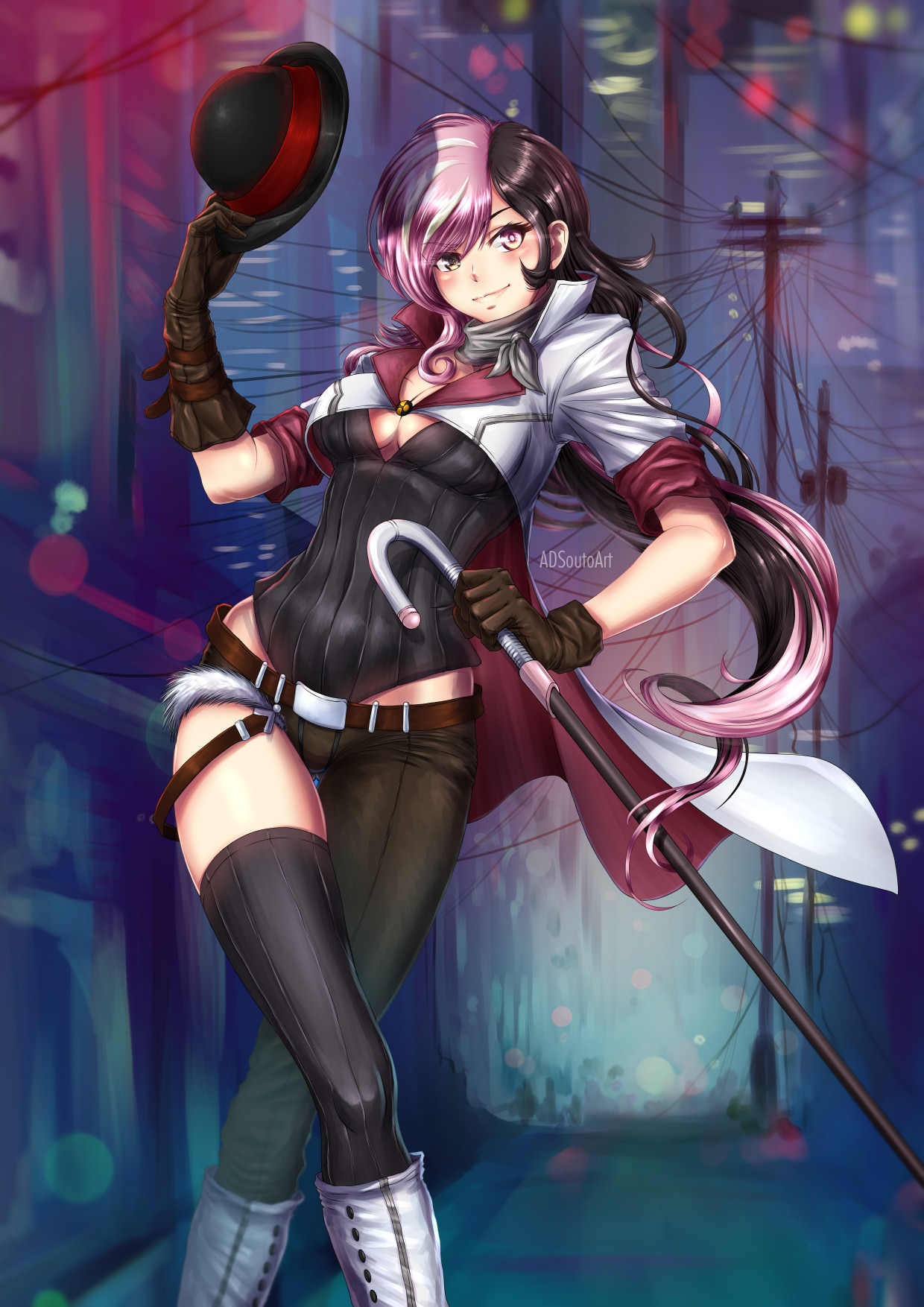 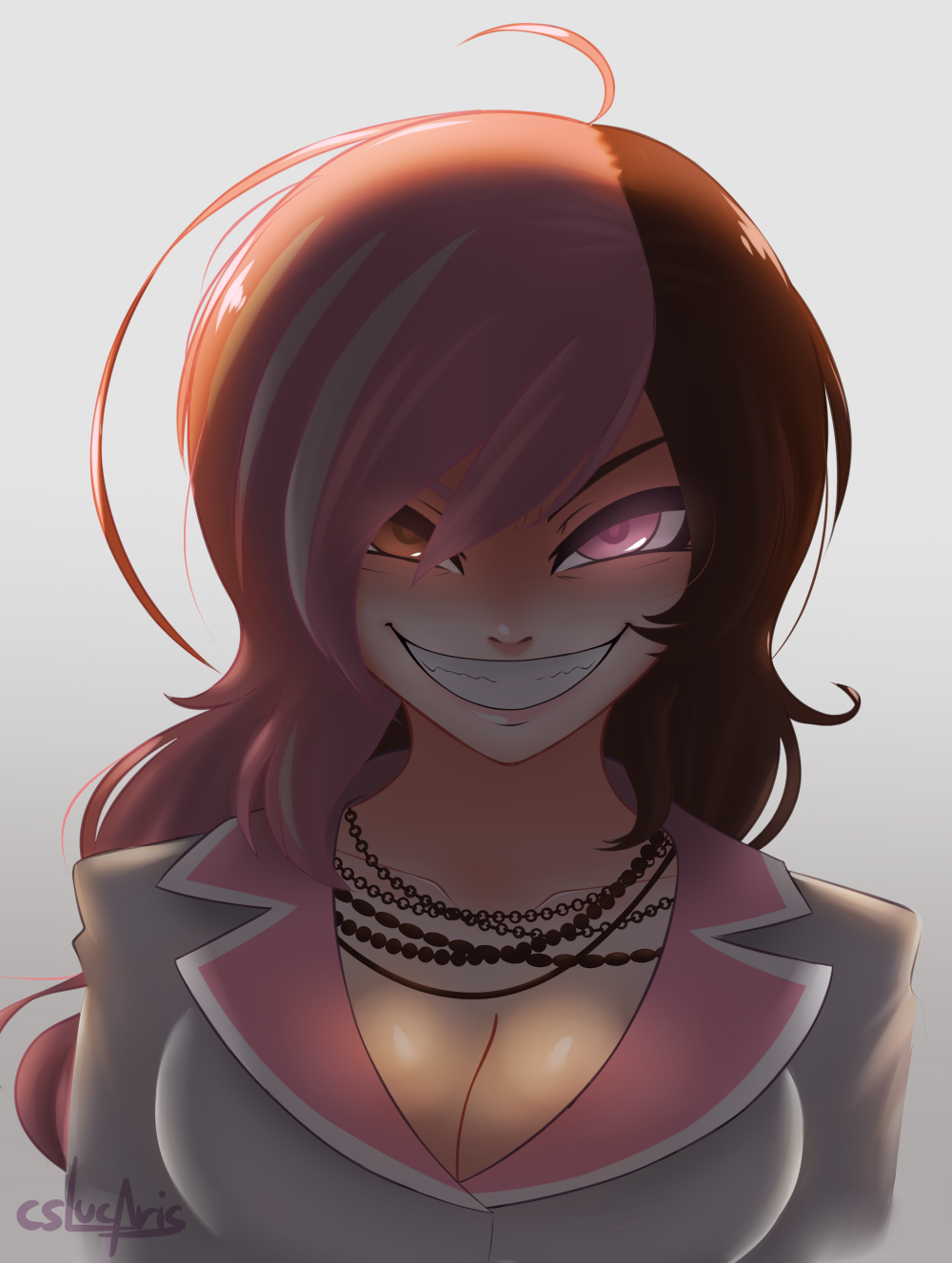 Except one. A single blemish on their record. A single child whose name went unmentioned in their meetings behind closed doors and the constant rabble on the playground. A single thing born of cruelty and nefarious intent. A single...girl.

What started out as simple rough-housing had quickly transcended into near-fatal incidents one after the other. Two boys crushed beneath a dresser. A girl with a nail driven through her hand. The kitchen pantry mysteriously set ablaze. A spreading sickness enveloping the building. Some evil had entwined them all, and Margaux appeared at the center of it. It had become quickly apparent to everyone that this was not a child. It was Satan’s spawn, sent to sow the seeds of discord in their place of holy benevolence. They would pray each and every day for the next month that they would be protected and that the creature may face divine retribution.

God would hear their prayers. A common metalsmith by the name of Lefeuvre would arrive one rainy April afternoon to adopt the child. A tight-lipped yet generous individual, Mr. Lefeuvre would prove to be a strict instructor in the trade he wished to bring the child into. From the moment she stepped through the door, Margaux was met with a hammer in her hand.

Smithing was a delicate, yet demanding art that occupied her time day and night for years to come. With every powerful strike that sparked the metal, every painful mistake that scorched her skin, and every bead of sweat that flowed forth from her countenance, her body became stronger and stronger.

For reasons left undisclosed, Margaux left the household around the time she had turned seventeen. Curious, given that her father’s unwavering conviction had kept her tethered to their home. What became of him is still uncertain, but from what she was willing to disclose, it was no longer wise for her to remain there. All that’s known for sure is that their years together hadn’t changed her in the slightest.

Margaux hadn’t been out on the street for half a day until she somehow came in contact with a notorious gang leader. He had been holding a tournament for promising initiates, the winner of which could join their little group. Needless to say, she tore through the fodder and emerged as the victor before the sun had set over the city. The leader stepped forward, congratulating their newest recruit on her victory. He offered his hand out, whereupon she crushed his throat with a single punch.

The ensuing upheaval saw Margaux emerge atop a pile of broken bodies that would, in turn, pledge their loyalty to her and her alone. The gang was reorganized in short order into a mob, retaining control through horrific shakedowns that their newfound leader took an eerie pleasure in participating in. In no time at all, her organization had become among the most wanted in the country. Despite all of this, however, it didn’t take long for her to become tired of it all. She needed an outlet.

What came to her most naturally was boxing. One business they had been “partnered” with was local boxing gym. Under threat of making certain renovations, she was able to convince the gym’s head to coach her at her beck and call. Placing her duties as the mafia’s head temporarily behind her, she would develop a near-obsessive relationship with the sport, training day and night until the equipment broke beneath her fists. But that wasn’t enough. She’d begin participating in local competitions and private rackets, maintaining a short-lived amateur career characterized by inane violence and zero remorse. In seemingly no time at all, she’d managed to get herself banned from every federation in the city.

So, she started her own. Through the chain of command, the news would spread across the city, inviting every fighter worth their salt to be a part of her tournament. Whoever could best her by the end of it would receive a very generous cash prize. The real reward, however, was for Margaux. Over the next few years, her circuit would become the talk of the underground. Every scrapper from across France found their way to the doorstep of la bête one way or another. After a failed sting operation by authorities, Margaux caught national attention, forcing her to wind down on her hobby.

But not before the arrival of a scout from AFW, extending an offer to Japan to begin contract negotiations. Needless to say, she was intrigued. Had she known of bigger game overseas, some more suited to her temperament, she would have left long ago. Sometime later she’d disappear from France, taking up a Japanese residence from which to begin her new career of bloodshed and misery.

Fun Facts:
- She made up what was called the “Kelpie Game” back at her orphanage to play with the other kids. Whoever could hold their breath the longest in the river flowing beneath the church bridge was the winner. The nuns put a stop to it once sickness began to spread, but she still looks back on those memories fondly.
- Disgusted by piercings. She’d rip them away from any of her followers that wore them around her.
- Her parasol was originally pilfered to protect her fair complexion, but steadily became a symbol of her authority. Even now, its mere sight sends chills down the spines of passersby back home.

Timeline & Events
Match l Backstage l Promo
1. Underground Clash! - The juggernaut faces the beast in the ring. Only one walks away from this skirmish. Let there be blood.