Strategy: As a luchadora, Loretta makes use of high-flying maneuvers and is generally agile and quick in the ring. She utilizes her agility, performing aerial attacks in tandem with power moves. Being a rudo, her wrestling style is rough and relentless, often incorporating stiff strikes in her repertoire. Also, despite being a luchadora, Loretta is still quite balanced as a wrestler and makes use of her experience from her time in Japan.

Type: A rudo who does things that rudo always does, so typical. Despite that, she is in no way unskilled.

Preferred Attacks: Aerial maneuvers, stiff strikes, power moves and a handful of holds. After her time in Japan, she incorporated Asian mist in her repertoire, often spitting out blue or green mist.

No Mask and Boots: 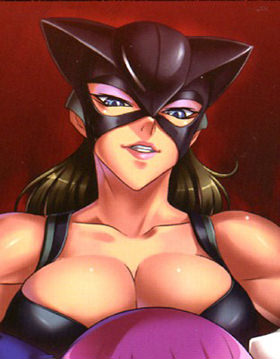 Personality: Loretta seems to enjoy being a villain, liking the way people are booing at her. She likes provoking others just to see how they will react and she considers making people losing their composure to be her personal victory. Even so, while she may consider herself a rotten-hearted cunt who enjoys her role as a villain a little too much, she does care about people whom she considers to be her close friends, though one can count them with only one hand.

Due to being Oboro's protege, she admires her, though there are times when she's not above teasing her mentor. She is one of those 'girls' whom Oboro found and took in, but Loretta never seems to confirm it.

Past/History: Loretta started her career as a professional wrestler in lucha libre, putting on the mask of La Bruja, the name that she inherited from her mother. For the first few years, she managed to make a name for herself. One day, her mother died due to brain tumor, and with that, Loretta's passion in wrestling died with her. She even considered destroying everything in her possession related to lucha libre, including the prized La Bruja's mask.

But, a chance meeting with one named Oboro Scarlett put a stop to that. Inspired by her newfound mentor, Loretta followed Oboro to Japan and together with her, she joined several underground wrestling promotions, changing her wrestling style. A few years later, she returned back to Mexico and appeared as La Pantera. She kept wrestling in Mexico for a few years before she received a message from her mentor back in Japan who told her in details about AFW.

Liking what she heard about this giant wrestling promotion, Loretta returned back to Japan. Using the name Loretta Sombra as her ring name in AFW, Loretta signed her contract and was prepared to fight in her first match in AFW.

Fun Facts:
Loretta is fluent in English and Japanese, thanks to her time wrestling in Japan a few years prior.
Despite her cat motif, she is actually allergic to cats.
Even though she's a luchadora, she does not respect lucha libre's tradition like freely taking off her mask. As a result, she is a social pariah within the lucha libre's community.