» Acrobat against Giantess part 2: the gym encounter!
by Ringropes98 Today at 9:10 am

» Jasper Rhys Vs. Ryo Kamiya!: Rank Does Not Matter. [Debut Match]
by Diesel_Electric_Razor Today at 8:41 am

» Halloween match! Trick or treat? - The Part Timers vs Blair Takashima
by pu-level-up Today at 6:44 am

*adopted from Oathkeeper with permission and the utmost generosity.
Chizuru Nagahara
"The German Suplex Specialist" 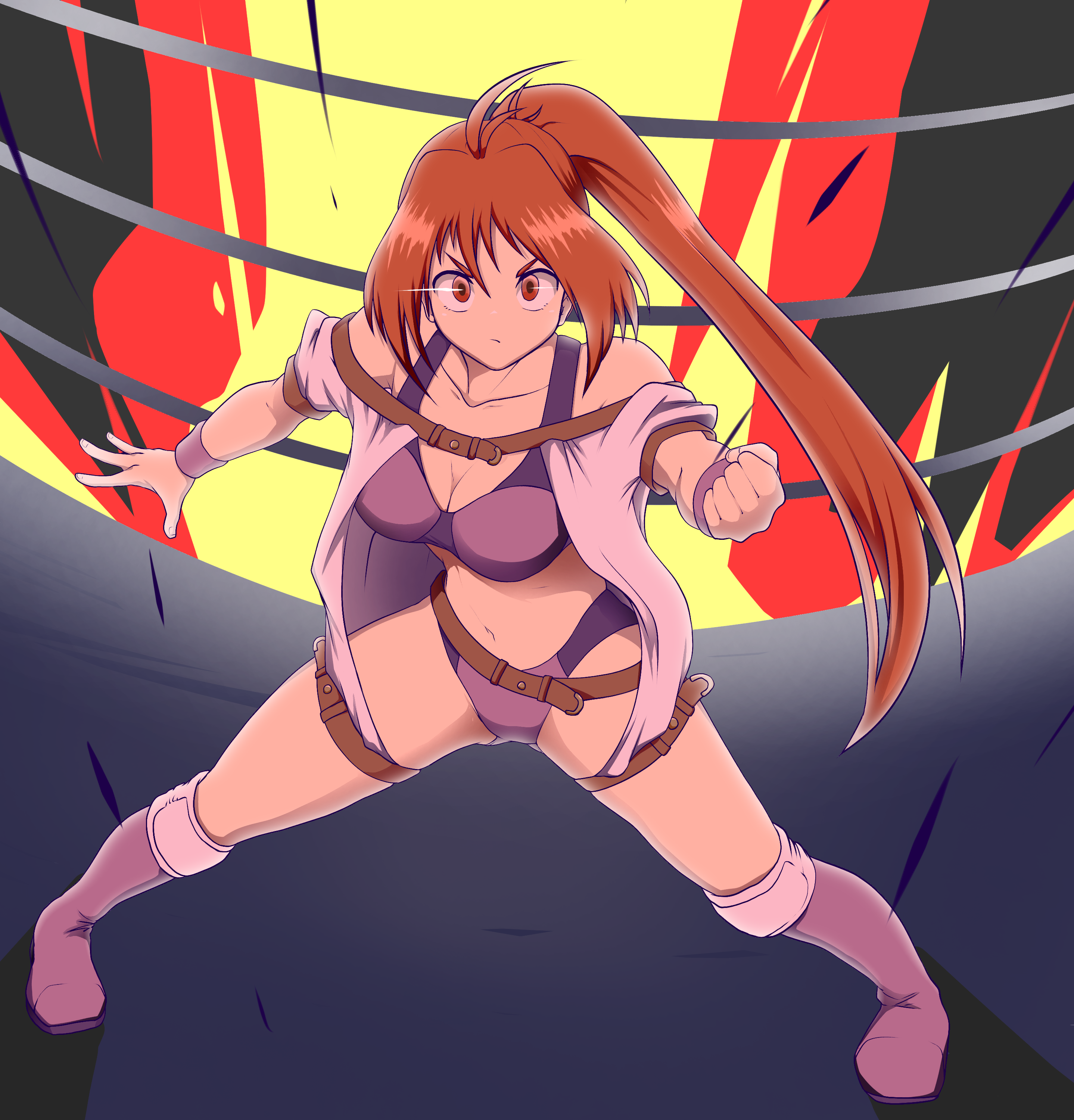 Signature Moves:
Chizuruplex- A German Suplex, but it’s done by Chizuru Nagahara. You’ll know it when you see it.

Headbutt- Her mother always said she was hardheaded.

Finishing Moves:
Chizurunami - A dragon suplex performed from the top rope, sending a devastating shock to her opponent’s system from the head down.

Indra’s Wrath - Chizuru lifts her opponent atop her shoulders before dropping them down and catching them by their waist. She will immediately fall backwards, slamming them into the canvas with an Electric Chair German suplex.

Nagahara Super Crusher Drop - A top rope variant of Indra’s Wrath, with a release. A powerful move she devised to handle the increasingly tougher, more robust opponents she encountered during her hiatus.

Spoiler:
The amount of fuel she keeps in the tank is the unsung hero of Chizuru’s success as a wrestler. She’s fully capable of pulling off multiple suplexes in a row and continuing the match as if nothing happened at all. She’s still human, however, and can have the wind knocked out of her all the same if she gives her opponent the chance.

Spoiler:
The Wrestle Angels’ undisputed Queen of Slams and former Asian Heavyweight Champion. Chizuru is incredibly strong and capable of picking up just about any opponent of any size or shape before faithfully suplexing them into the canvas.

Spoiler:
Most opponents would think it would be easy enough to just stay out of Chizuru’s grasp, but this is easier said than done. She’s light on her feet with enough knowledge of the ring to know how to get around her opponent with relative ease. While not her forte, her swiftness is integral to being able to pull off most of her repertoire.

Spoiler:
As a veteran of the ring, she can take a hard shot when its needed, but is more an offensive player. Her guard could be better if she were inclined to train this area more.

Spoiler:
A similar problem here. She’s capable of pulling off more than power moves, but she’s more brawn than brains. She specializes in suplexes, has a good foundation for submission holds, but she hasn't spent much time making these two work together.

Spoiler:
Rare to see her throw a punch, strong as she is. When she does, it's almost always to set up a big slam. Watch out for her headbutt, though.

Spoiler:
Has a basic, yet painful submission repertoire. She can bend most people pretty well, though most of the pain comes from her raw strength and not any finesse.

Spoiler:
They don’t call her the Suplex Scientist for nothing. She can and will slam her opponent into the canvas as many times as it takes, in an impressively varied amount of ways, to keep them down and out.

Spoiler:
She had plenty of time to experiment in Wrestle Angels. Her place isn’t in the air, and she knows it.

Spoiler:
Oblivious as she can be, Chizuru is still a well-versed veteran of the ring. She can turn around most holds and reliably read most anyone that isn’t above the amateur level.

However, this can all very easily go to work against her. She can be rather simple-minded for and tends to be very honest, if remarkably blunt, about almost anything. Her kind-hearted and trusting nature can and has made her susceptible to deceit. Even more so in an organization as obscure as AFW.

In the fight, however, the true Chizuru Nagahara shines. The German-Suplex Specialist aims to give it her all once the bell rings, and then some. She has the heart of a true wrestler believing in fair, yet fierce competition.

Appearance: Chizuru appears to be perpetually shrouded in a warm aura. She has a warm smile about her face that compliments her fair complexion. She has long, brown hair that’s kept tied back in a ponytail during matches, but prefers to keep low at home. Her sizable bust, in addition to scoring her a couple boyfriends, has allowed her to make comfortable use of smothers. As matches go on, she’ll unbuckle the belt around her chest, letting the white drape fall free and toss it off to the stage hands. 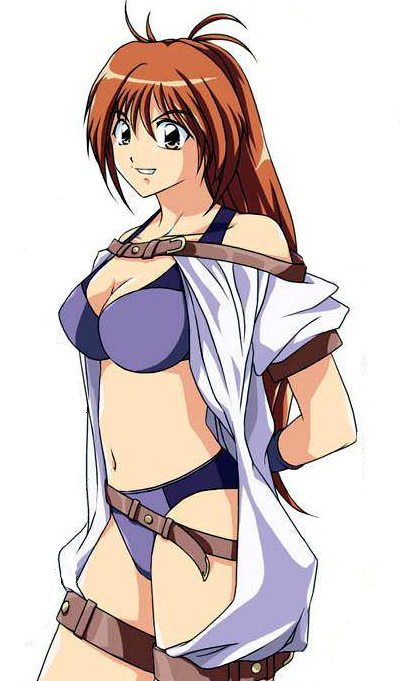 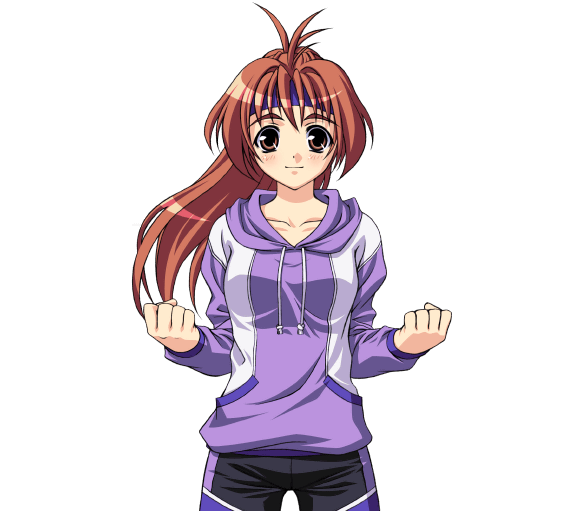 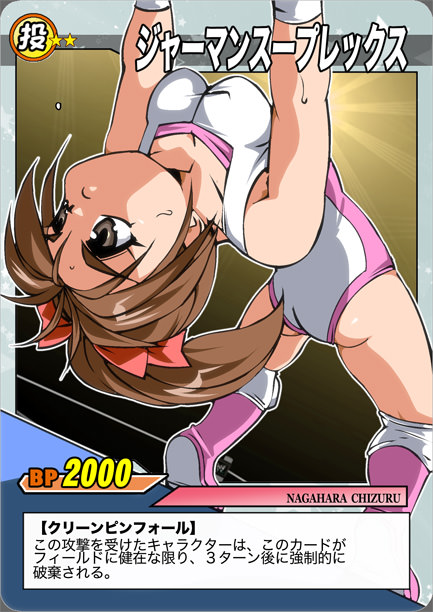 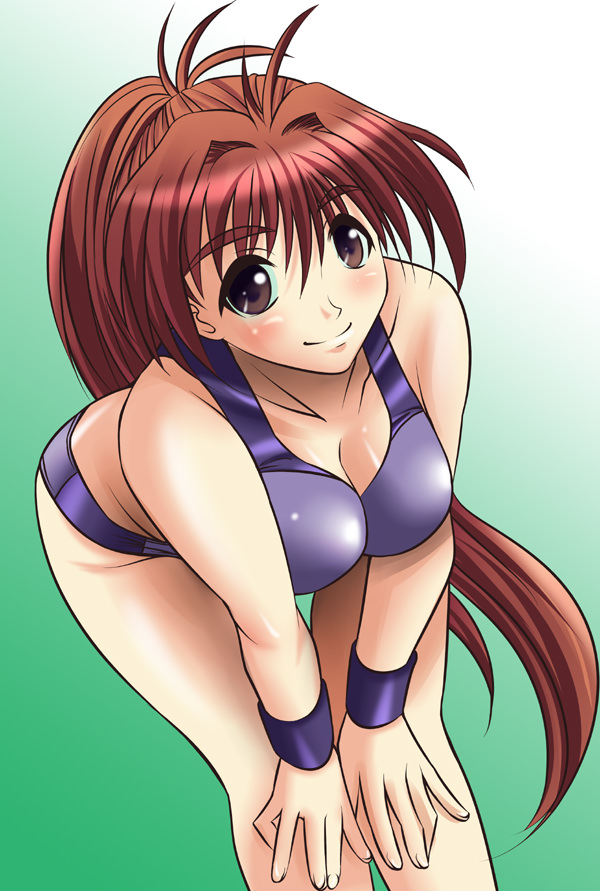 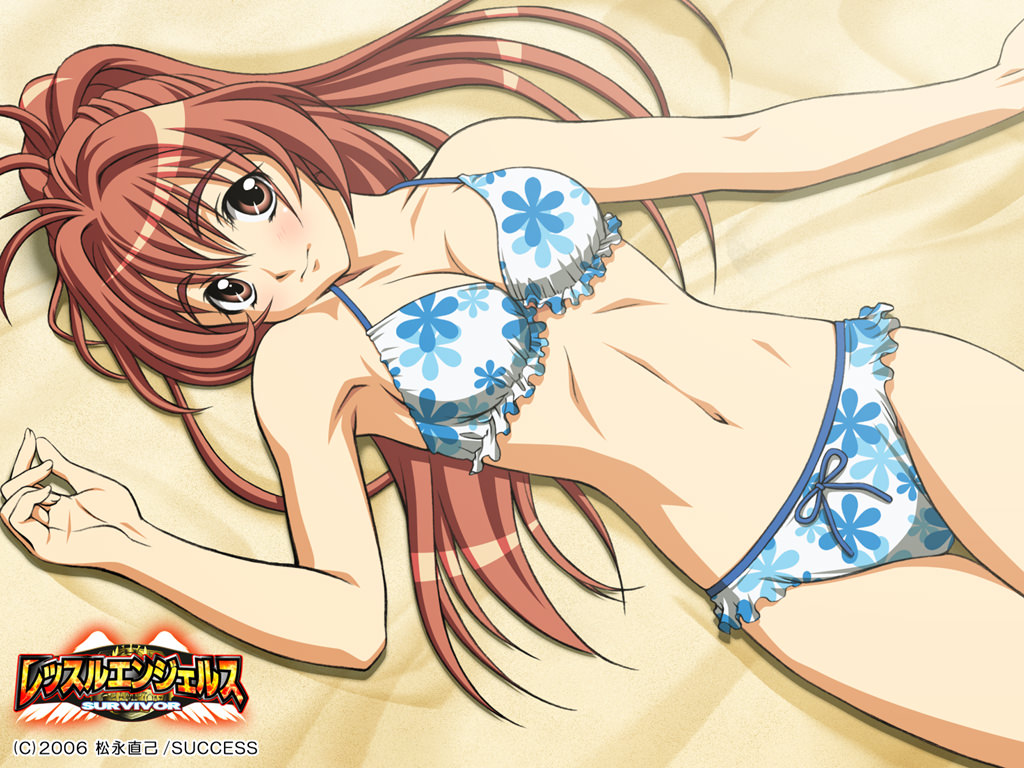 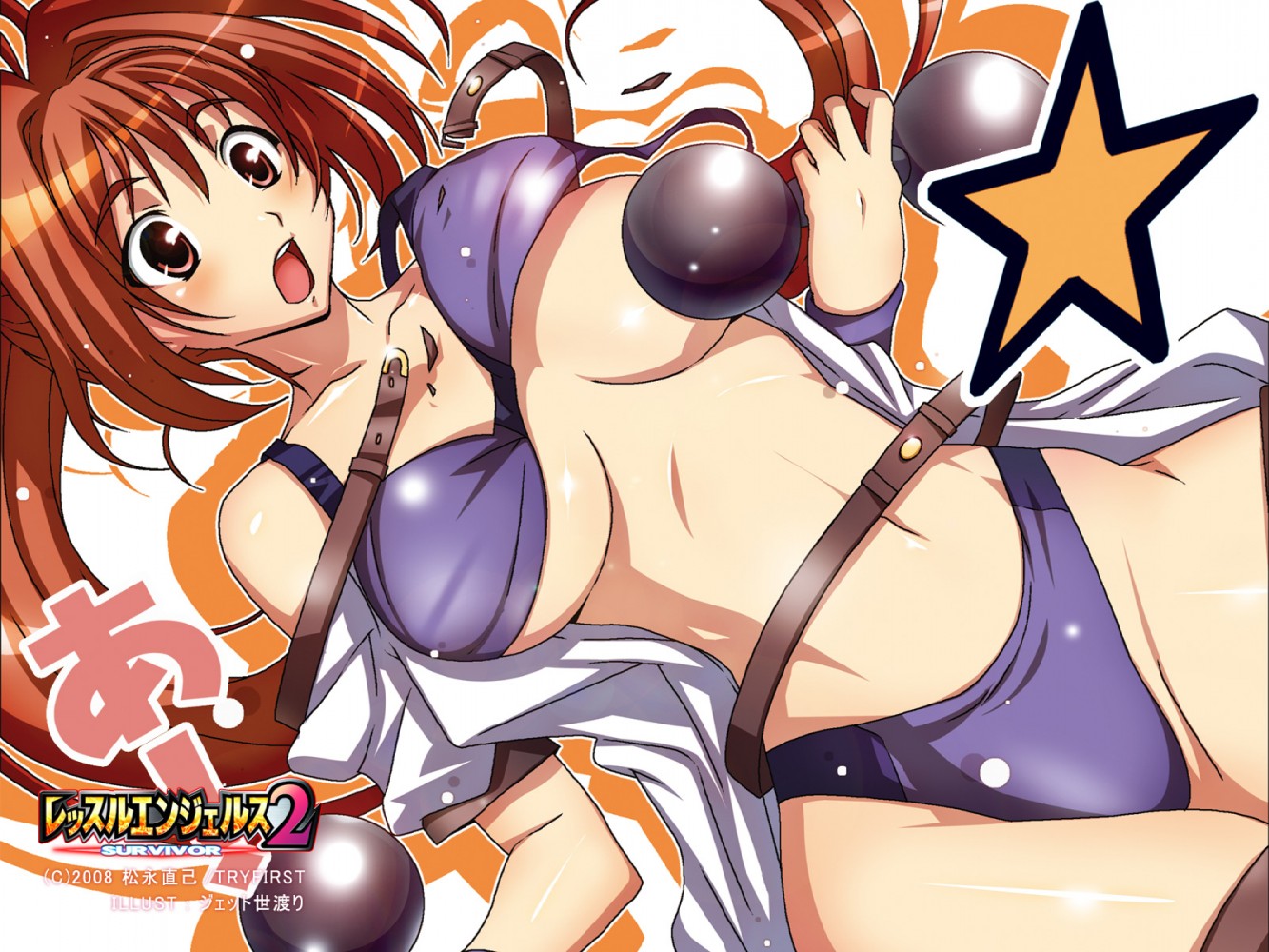 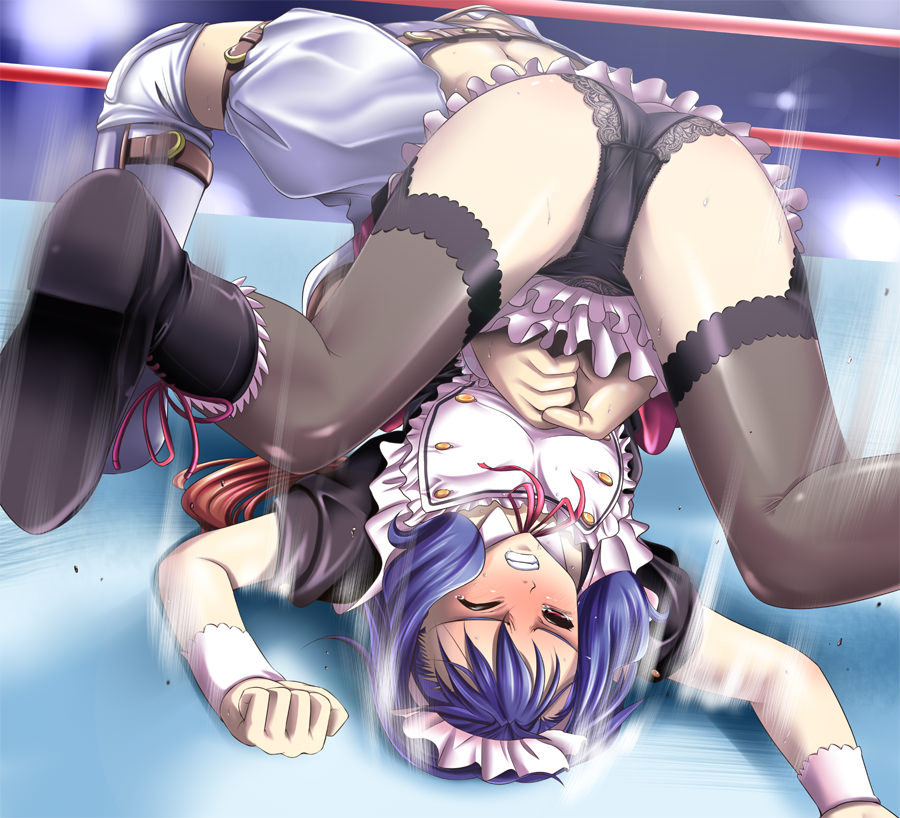 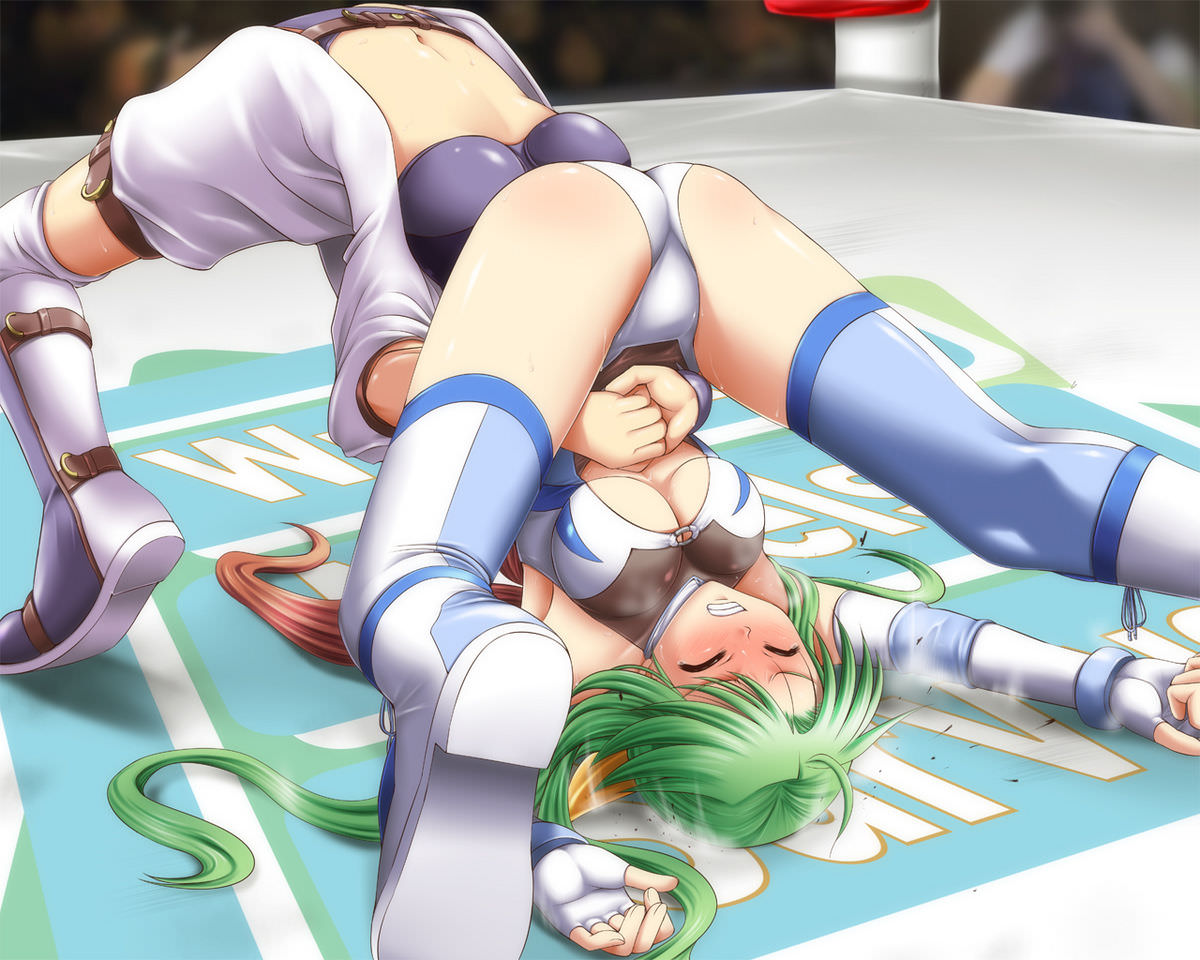 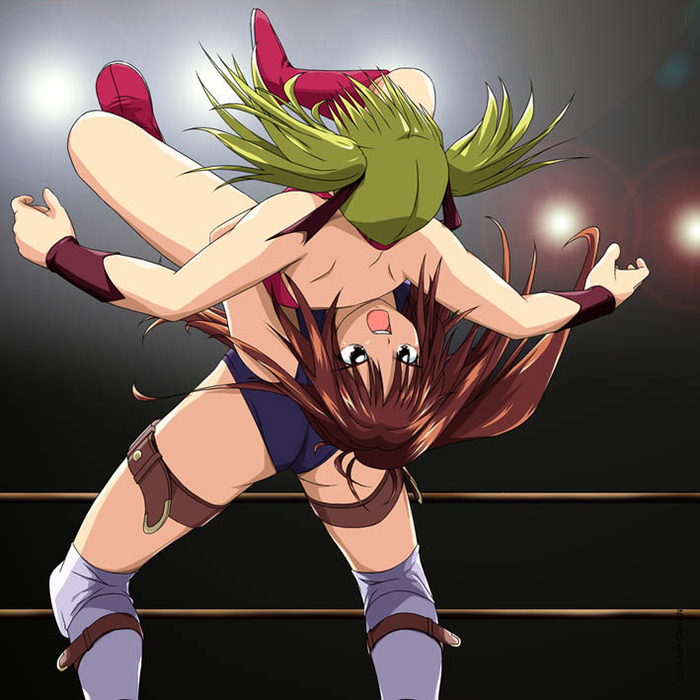 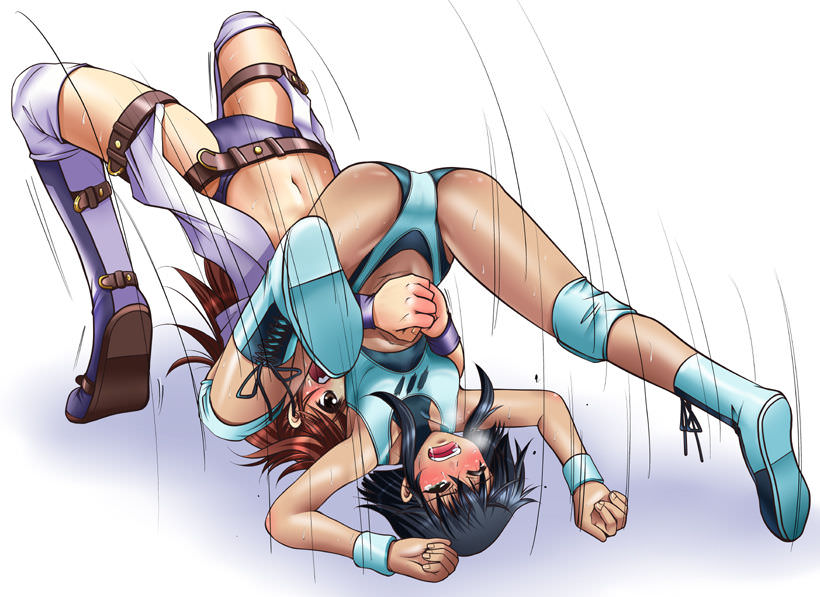 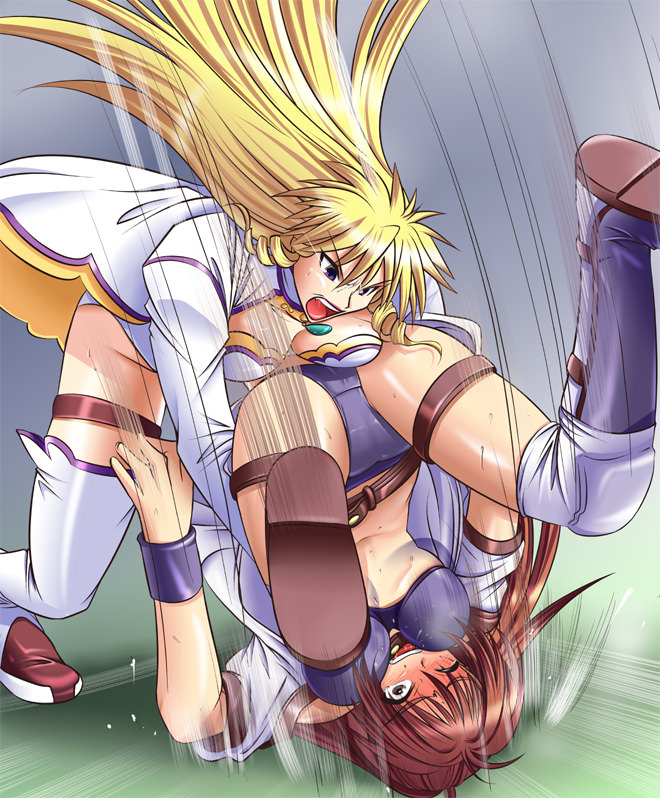 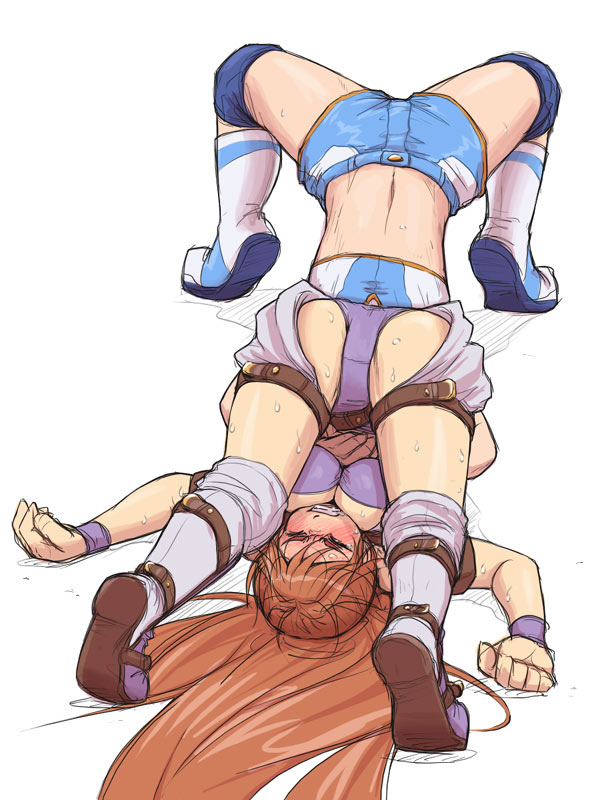 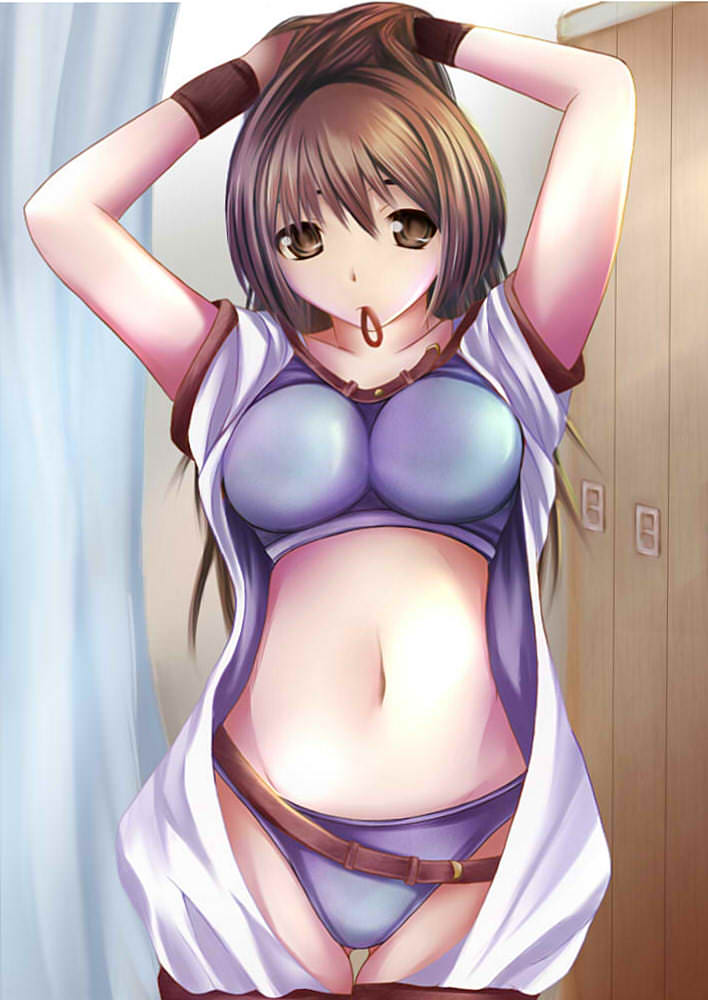 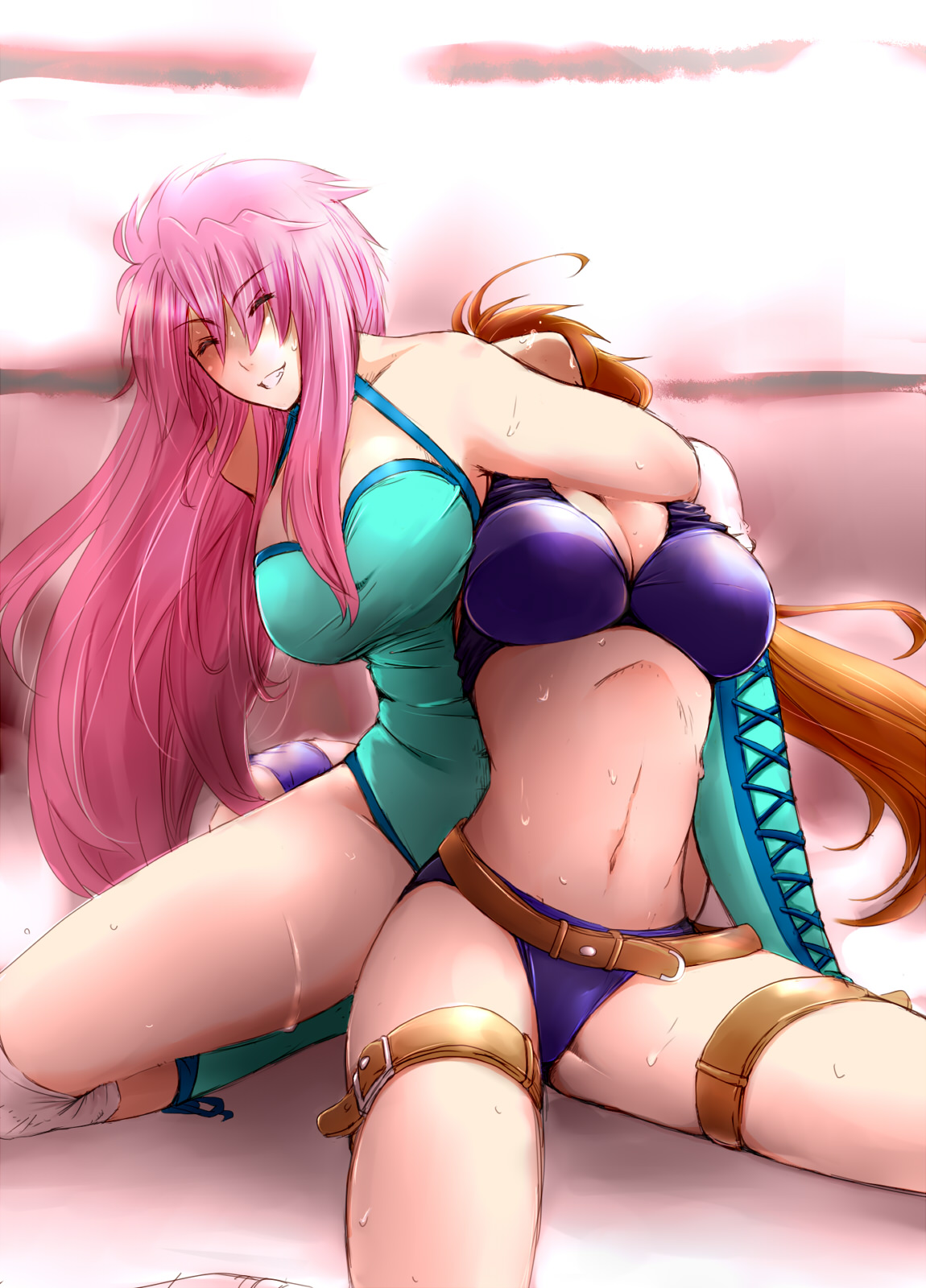 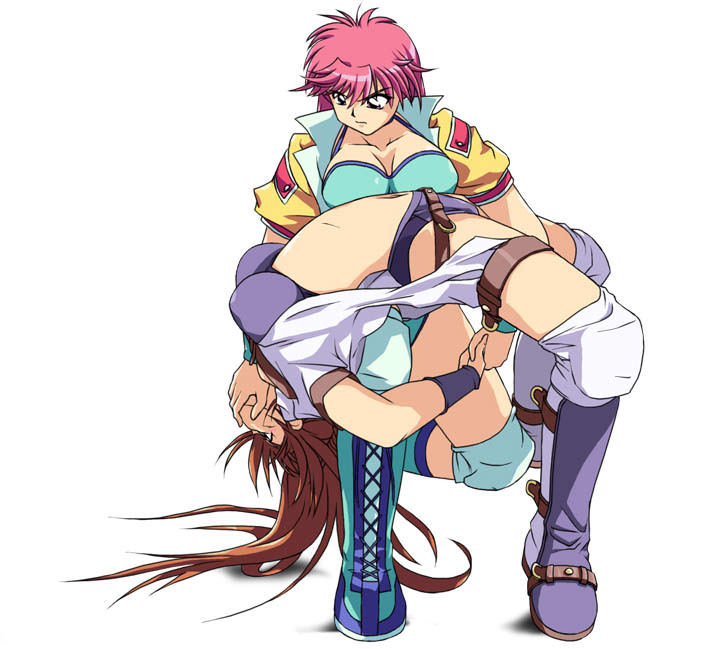 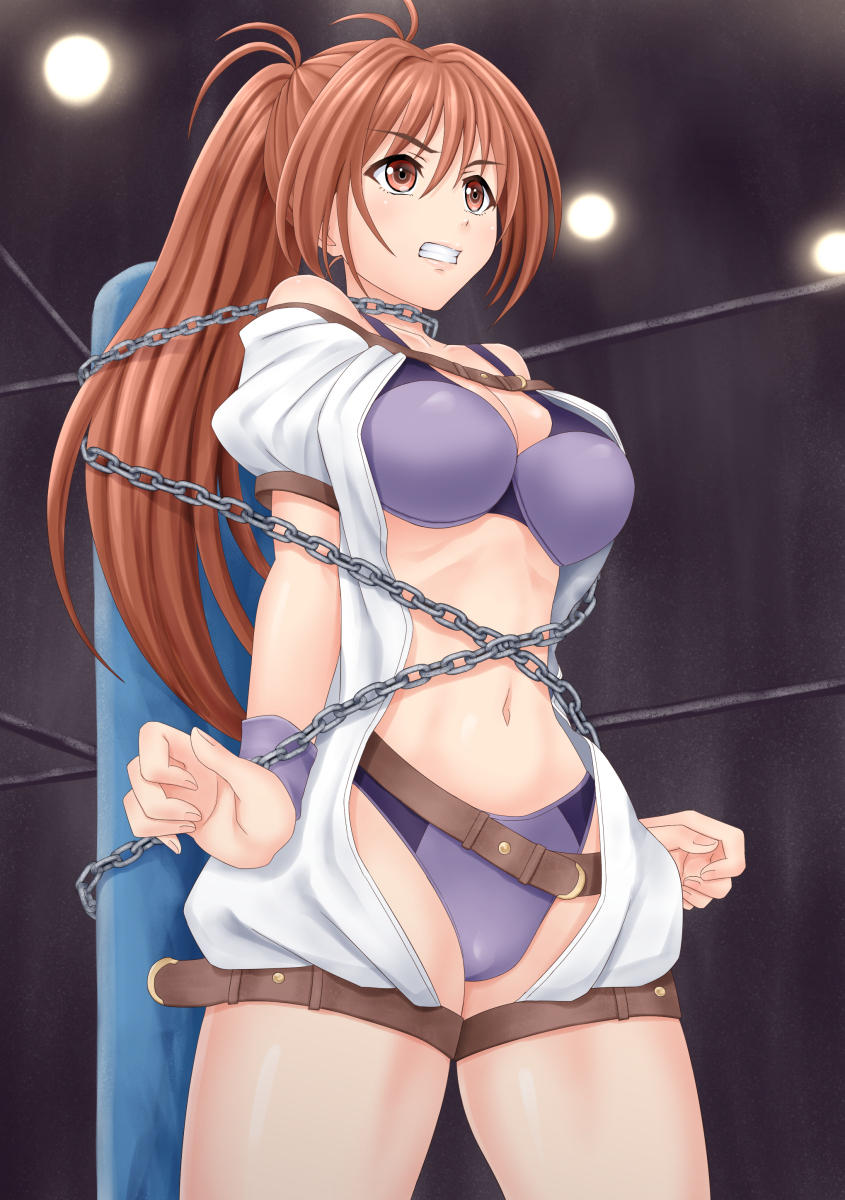 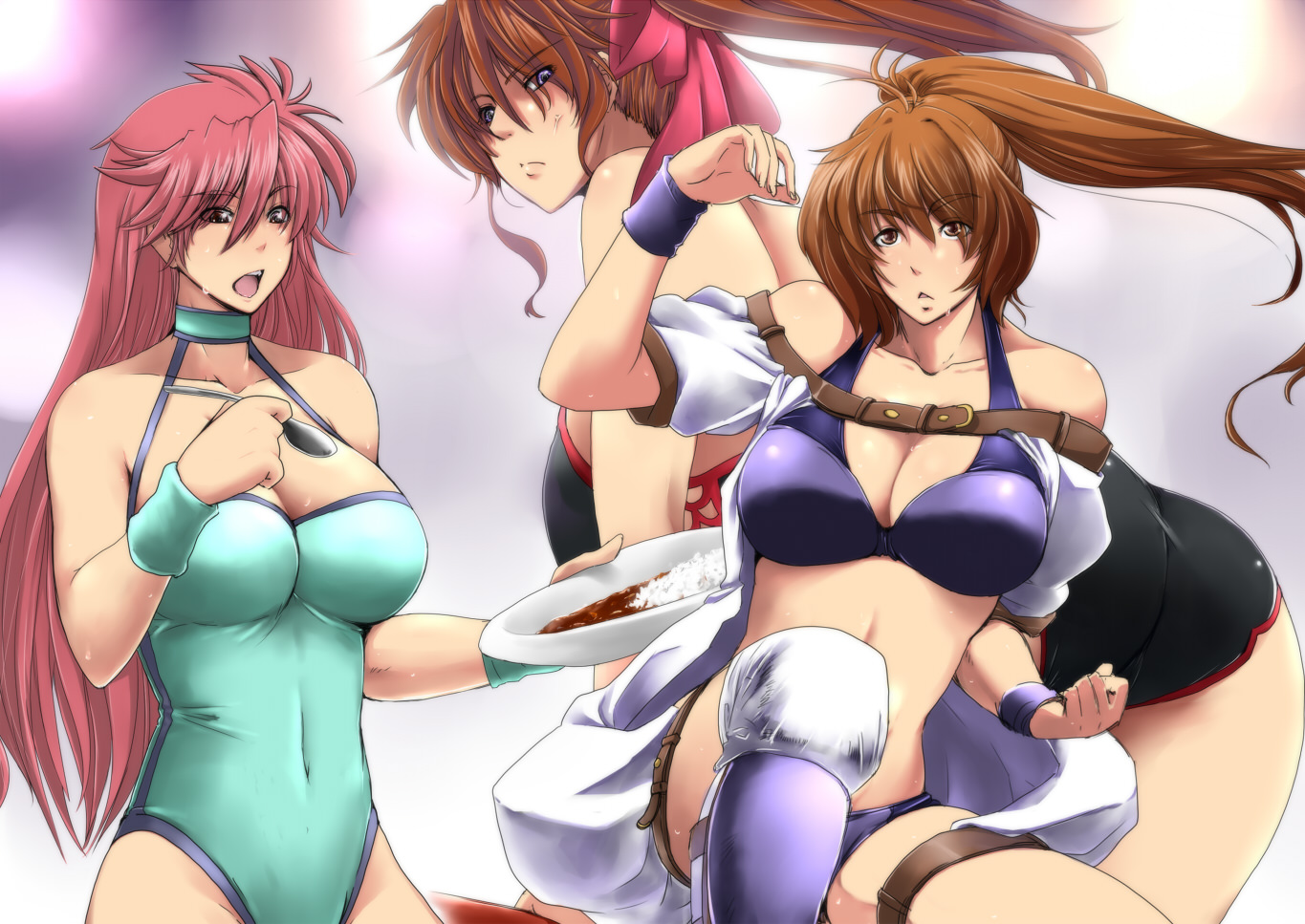 Her resounding strength was noted as early as her third year of elementary school. One day it was lifting a lunch table, another day it was picking up another child over her head, another day it was even pushing the school dumpster into the middle of the playground. It more or less became part of her everyday schedule to have a call home to her parents despite the teachers' best efforts to keep her under control. Soon enough, however, her strength was never recognized as anything other than a curiosity. Her classmates and the faculty quickly adapted to it and she continued life as the class freak until junior high.

Desperate to make friends, she started hopping from one sports club to another until she finally settled in the wrestling club. There, her remarkable strength was finally met with some appraisal. While she never emerged as a leader to any capacity, her prowess saw the team through season after undefeated season. After graduation, her experience allowed her to compete nationally in all of the professional circuit. Her string of hard-fought victories stamped her place as a rising talent That, in turn a couple years later, got her noticed by one of the biggest wrestling promotions in Japan: Wrestle Angels.

Almost immediately, she met and befriended Rei Tomizawa and Cutey Kanai, two other rookies that joined at virtually the exact same time. Together they were legendary: Rei with her bright, can-do attitude and Cutey with her...well, cuteness. When finally combined with Chizuru’s power, and more so her clumsiness, they became rightfully known as the "Three Idiots”. Rei being the de facto leader between them, they would constantly scheme and pull off an endless series of pranks up and down the promotion. There were occasional attempts at title runs, but they never really went anywhere and they were only ever really known for their eerily consistent antics. But in the end, that was all just fun and games. Their passion was real, and their deep-rooted friendship was all they needed to push their wrestling careers from one level to the next.

Amidst financial difficulties, Wrestle Angels had to temporarily suspend some of its talent until the administration could improve their standing, the “Three Idiots” among them. During this brief hiatus from the promotion, Chizuru competed in a number of strength and weightlifting competitions, determined to come back harder than ever. She even managed to secure the Asian Heavyweight Championship amidst the many opportunities her success at Wrestle Angels had opened for her. When she finally returned to the promotion, she made her mark as one of the strongest wrestlers on the roster. She wasn’t alone either. Rei had improved immensely during her time away, and Cutey, even more surprisingly, captured the Asian Junior Championship.

Everything was looking up for the new and improved idiots, but before they could manage to gain any real momentum, Wrestle Angels disbanded. The three shared a tearful farewell at the front gates and went their separate ways.

Chizuru flew to Greece, where she lived off what remained of her income and began training at local gyms. Before she could retain the confidence to keep moving forward with her career, she sought to hone her craft. She spent the next two years getting more in touch with her traditional wrestling skills and making sure not accumulate too much rust. One day, she got a call from Rei, who’d been training in Brazil up to now. She and Cutey had joined AFW, an up-and-coming federation in her day that had finally become one of the greatest promotions around. By securing both of them, management had made a fair bet that they could convince Chizuru to join as well.

They were right. Finishing up whatever business was left in Greece, Chizuru made the journey back to Japan as the last of the trio to join the new promotion, eager to bring her career to new heights and endure all new kinds of misadventures.

Fun Facts:
- A German suplex otaku. Possibly the only one in existence. She’ll gather manga panels, wrestling posters, instruction books, and just about any piece of related material she can find and adds them to her bedroom collection. She’ll often watch anime scenes featuring a German suplex in them and get the craving to replicate some of them shot for shot, line for line, impact for impact, in her own videos with her friends. One a whim, she started posting them to her official YouTube page to overwhelmingly positive fan reception. Her most popular video as of now has over 900,000 hits, reenacting a scene from Angel Beats!.

- The worst accident she’d ever caused as a result of her clumsiness was a 12-car pileup on Yasukini street, resulting in $87,424 in property damage. No injuries, at least.
- Chizuru designed her own costume, contrary to public knowledge. The adornments of belts and buckles are thought in her family to ward off bad luck. The first iteration of the white covering was actually her bedsheets, because she liked dressing up as a ghost at Halloween. It was replaced with proper, resistant linen after her first match.
- Had a brief stint as a fashion model for various kimono designs and companies during her suspension. It was a bit too slow-paced for her liking, though.

New Beginnings
6. One More Reunion - Chizuru finally returns to the ring and goes head-to-head with Wrestle Angels' number one knucklehead, high-flying, blonde hating Okinawan tomboy.
7. Winners and Losers - A hard-fought match puts Chizuru down in the dumps when Blade lends a comforting hand and the answer to her problems.
8. Hell's Angel - Chizuru heads over to Tension to stuff Daisuke Takeuchi's big fat Angel-disrespecting mouth.
9. Like a House on Fire - Moving day! Chizuru and Blade move boxes, put them places, and everything is horrible! 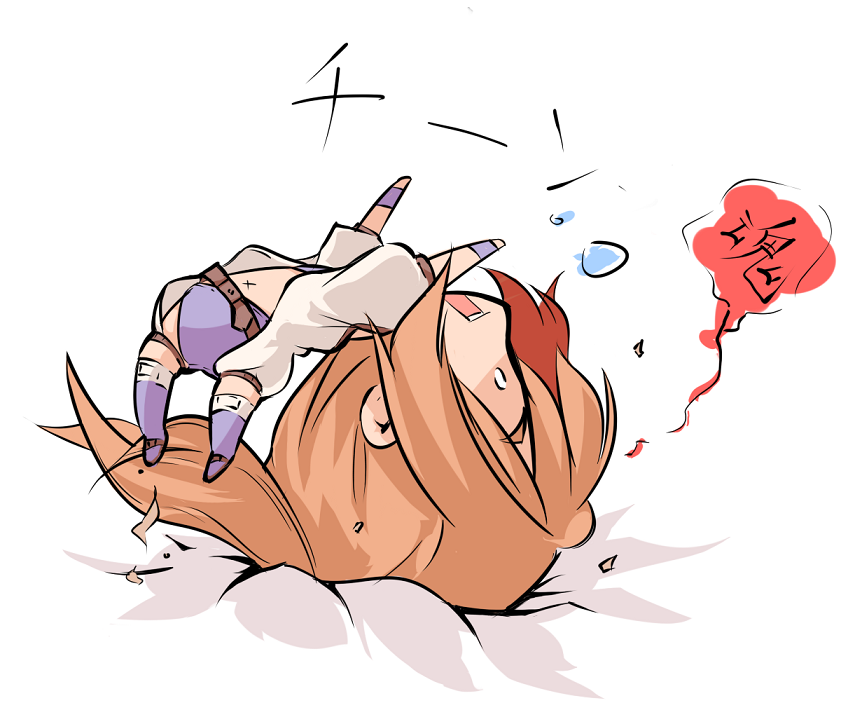