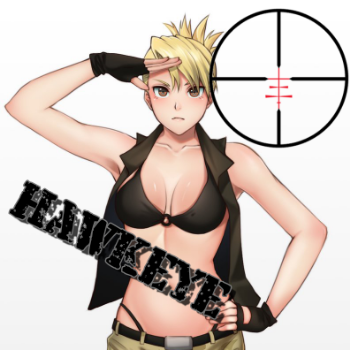 Match Type: Submission
Victory Conditions: Victory can only be obtained by making your opponent submit.
* * *
She said ‘yes’.

Of course she did. Army had only met Hawkeye twice, but he was already starting to get a solid idea for the sort of woman she was. She reminded him of his sister in a lot of ways - smart, capable, skilled, but proud. She wasn’t the type to back down from a challenge, damn sure not one that was issued in front of over a million people. It was only a matter of what she’d go with, not whether she’d go for anything at all.

But her choice, the submission match, that was a surprise. Army had only one submission win in his entire career, and it was on Hawkeye - but a different Hawkeye than the one who stood before him, obviously. It wasn’t something he was good at, not something he could do with any real reliability. A match that played against his strengths. He should’ve tried to get her to go for something else.

If he did, though, he would be backing down, and she’d give him no end of shit for it. So…

”You’re on.” That was all he said and all he needed to say.

Army tossed the microphone off to the announcer and made his way to the turnbuckle, grabbing the ropes for a quick stretching session as a referee came trotting out. He’d need to be nice and limber for this, stay loose. All the while, he was running over their last match in his head, trying to remember all the things he’d need to watch out for, what he needed to worry about the most. Would she be going for his arms, try to wear down his best weapons? Work on his legs, slow him down? He was reasonably sure he wanted to work on her back and set up for torture racks, but maybe that wasn’t the best idea given the way the last match went.

Hawkeye had done just that, so luckily, all she had to do was head down to the ring, perhaps ironically, pondering the same as Army, wondering just how she would submit him. Her time in training had taught her many various holds that she could use, targeting various limbs. All she had to do was pick one. Arms? Unlikely, those were his strongest attribute. Neck and chest, or ribs, also seemed unlikely. Too thick.

That left legs. Easiest to soften up and apply an effective hold too...though it came with the added problem of trying to actually get him down onto the mat to apply said holds. Still, she had done it before...

After slapping a few hands, she slid under the ropes, rolling onto her knees and getting up to her feet, bouncing on her feet and shadow boxing a little, making sure she was nice and limber, as they both waited for one of the referees, who were often on standby, waiting for such impromptu matches, to come out and start things.

Army had already begun his stretching when Hawkeye made his way into the ring, making sure he didn’t have any kinks to hold him back. She wasn’t the fastest opponent he’d ever faced, but she was quick enough, possessing more than enough speed to be a pain in his ass. Good explosive speed, with some real power to back it up, as the knee that took him out proved.

He’d been so lost in his thoughts that he almost didn’t notice when she spoke up. He broke off from his stretches long enough to look her way, then shrugged.

”Look,” He brought his fist up and worked the tape on his fist with his teeth, gnawing off a loose end. ”You got me last match. Okay. Fine. Not trying to make it personal. You’re good.”

There was more - a lot more - he might’ve had to say, but time was running short, with the referee hurriedly making her down the ramp for their match. ”I’ve got a lot of haters to shut up. Lot of people to prove wrong. So I’m coming at you hard. You don’t get mad when I take this with a clean sweep.”

He threw her a thumbs up, then retreated back to his corner as the referee took up position between. She’d be calling for the bell any second now, and then…
_________________

She replied, raising an eyebrow his way. She could understand though. She had her fair share of haters that she had to shut up, just to be able to make it back to AFW in the first place. She had no idea what Army's career was like before she came back, but if he felt this is what he had to do...well, so be it. She'd oblige.

The ref girl was finally in the ring, panting and wheezing from her run, taking a moment to catch her breath before signaling for the bell...and Hawkeye quickly moved in, arms up, moving in the same half-circle as last match, eager to see how Army started things off.
_________________
Check out the recently revamped Roster Page, now with pics!

”Won’t be cocky if I back it up.” He snapped his fingers, right before the bell rang.

Army moved in as Hawkeye started to circle again, kicking things off in the same way she’d done before. That time she’d gotten the better of him with some well-timed blows, shown she’d done her homework when it came to strikes. As much as the striking game was his thing, she would have to be ready for it. So a change of pace was the order of the day, then.

Army came towards her with his fists tight, looking like he was going for more punches. Instead, he switched into a grappling stance and lunged forward, looking to force her into a lockup and push her back to the nearest corner. Not his thing, but he had the size advantage. Made sense to milk it, right?

Hawkeye had been expecting some stand up striking, since that was usually how Army tended to start things off, from what matches of his she had seen since coming back. She had gotten in closer to him, closer than perhaps was wise, because of that. She was faster, after all, and could dodge some of his slower attacks and pepper him with shots. A decent way to start things off.

Except...he didn't throw a punch. Instead he lunged at her, taking her by surprise, the blonde barely reaching out to grab his arms, locking up with him. Still taken aback though, she couldn't stop his momentum, the former soldier finding herself quickly pushed back, until her back was against the turnbuckle, gritting her teeth as she pushed back against him. "Trying to trap me?"

Now, this was a winning strategy. Army had hoped to catch her off guard with the advance, wanted to get Hawkeye into a corner so he could work her over, but it all came together far better than she could’ve ever dreamed. His advance pushed her back, step by step, and until she was up against the turnbuckle, and a bevy of options were opened to him. ”Not trying.”

Army jerked away from her with a sudden burst, only to grab the ropes on both sides of the turnbuckle, dip down and forward with his shoulder, looking to plow her in to the pads and fold her in half. The ref would complain about the corner work and no doubt start to heckle him over it, but he intended on milking it for as long as he could.

This wasn't good. She needed to get out of the corner, fast. She lashed out, throwing out a hard swinging hook. After all, with Army so close, how could she miss?

...She missed. Army fucking dipped down, causing her swing to go over his head...and she paid for that miss with his shoulder slamming into her stomach, driving her back into the turnbuckle.

She let out, spittle flying from her lips as the air was driven out of her, her upper half leaning onto Armys shoulder, though she still tried to fight, pushing at his shoulders, bringing her fist down onto his muscular back!
_________________
Check out the recently revamped Roster Page, now with pics!

Subtlety was never Army’s speciality, and there was nothing subtle about the way he connected with Hawkeye’s stomach, hitting with full force and digging in deep with his shoulder. He had to give her credit, she hadn’t been kidding about her workout plan - it left her with a solid core, one that just about anyone on the roster would be jealous of. But it wasn’t invincible, couldn’t stand up to everything, and judging from the spit he felt dripping down on his back, he was willing to wager she had reached a similar conclusion.

He was just about reel back for another charge when her axe handle came down on his back, sending a sharp pain down his spine, nearly made his knee buckle. Not enough, but it reminded him that cornered mice tended to bite the hardest. Best be quick about this.

He reached out and wrapped his arms around her waist, lifted up and jerked back, attempting to send her flipping over his shoulder and towards the center of the ring, a flip that would end up with her coming down on her back.
_________________

He felt that, she was certain of it. Another couple of those would-

-she was upside down.

Why was she upside down?

Any chance to ponder was taken away from her by her completing the aerial journey that Army's modified back body drop had taken her on, hitting the mat with a solid impact, an "Uh!" escaping her lips. On it's own, the move wasn't all that bad, and she could have been up rather quickly from it. But given it just came after taking a hard shoulder blow to the breadbasket, Hawkeye took a couple seconds to get her breath back before rolling over, starting to push herself up to her feet, quickly getting her arms over her head in case Army had any ideas.
_________________
Check out the recently revamped Roster Page, now with pics!