No Holds Barred Match
Win by Pinfall or Submission 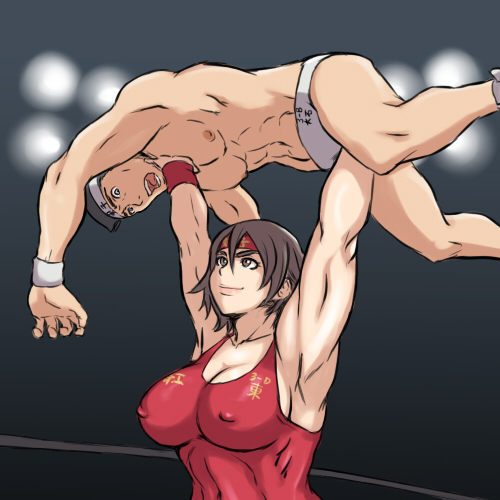 Tonight was going to be a big night for Red Nation. Linda was going to be facing a returning star from way back, which was the perfect test to show that they were the next big thing. By beating this woman, Red Nation could cement its position as a real threat and become the dominant faction of Tension. So, there was a lot of pressure on Linda to beat this opponent. Her name was Lisa, the Italian Amazon, which mad her sound like she’d be a tough cookie.

Luckily, Linda was their tough cookie, and she’d take this broad down! Kimmy and Syd had been training her extra hard for this too. So, wearing her red one piece, black shoes, and hachmaki, the big ass gorilla would head out of the locker room and make her entrance.

The song Red Nation would play as Linda entered the arena. A mix of boos and cheers were given, which was to be expected. Their group had done as much bad as they did fun things for the crowd to watch. So while some held them responsible for their acts, others simply wanted to see them fuck more people up.

To taunt the haters, Linda would flex her huge arms at the top of the ramp. This got a nice pop from the crowd, and afterwards she’d make her way down to the ring. Once there she’d slip under the ropes and stand back up. The, Linda walked over to her corner and climbed up it. From there she’d flex her arms once again to shown them off. The bulky woman even kissed them before getting down. Now all that Linda had to do was lean back and wait for her fellow amazon to arrive.
_________________
Caboose's Friends List The night was tonight. After a couple years away from AFW, Lisa Giordanni, "The Italian Amazon", made her return to the Tension Arena. Following her last matches in AFW, the curvaceous wrestler would face another woman in a No-Holds-Barred, Anything Goes match.

Tonight she was billed against a newcomer, a girl from the new team RED NATION that was making quite an impact in AFW Tension League. It was the perfect opportunity for the brunette to show that her time away from AFW wasn't spent foolling around - Lisa kept her workout and fighting training, ocasionally doing matches in underground leagues and gyms as well.

After Linda made her entrance, the lights shifted to the backstage curtain as Lisa stepped her 6'0 statuesque figure into the arena, under her theme music "Circus", as well the loud cheers and some boos - probably from RED NATION's budging fanbase. She catwalked, swaying her curves towards the ring where Linda was waiting for her, as she waved and blew some kisses to the crowd.

After crawling into the ring from the bottom rope and waving some more, Lisa turned to face her opponent. She was an amazon as well - a tall and definitively strong female fighter. Lisa was a couple inches taller, but Linda was just as curvaceous, more muscular, apparently heavier and maybe just as or even physically stronger than the Italian.

However, Lisa was more than up for the challenge. The brunette walked up to Linda, smirking and began to run her mouth as always... "So the newcomer likes to hit the weights huh? Let's see if your fighting is also on point, newbie." Lisa forms a guard and waits for the bell to ring, eyeing and sizing her opponent up.

Linda was glaring at her opponent as she called her a newcomer and a newbie. Also making subtle jabs about being so bulky didn't help her temper. Clearly this woman thought she would an easy target since she was not a veteran. However, that was not true at all, and Linda couldn't wait to prove the Italian Amazon wrong.

"Heh...that's a lot of big talk coming from someone who hasn't even been in this ring for a few years...besides, you don't look so tough..." the bulky woman responded as she pressed into Lisa, breasts to breast, forehead to forehead. Linda may have been the shorter amazon here, but she was still going to hold he ground with this one. After all, the bulky woman thought that while Lisa was taller, she was the bigger of the two.

"You actually look more like a underwear model than a wrestler. I mean you look good in it, don't get me wrong...but you don't look very...intimidating." she taunted the Italian amazon before pulling on and releasing her pink bra strap as if it were a rubber band. Linda meant what she said. Every word. But she also knew Lisa was as dangerous as she looked hot in her pink colored bra and thong. In fact, one could even say that the bulky woman was turned on by the mixture of strength and sex appeal. But she wanted to taunt the amazon back, and spun it into an insult to do so.

So, after plucking her opponent's bra strap, Linda would finally back away from Lisa at the ref girl's behest so the match could begin. With both of them getting into a fighting stance, the big ass gorilla would wait for the bell to ring so she could put this bitch in her place. So as a loud DING filled the air, Linda would charge forward to eagerly lock up with Lisa in an elbow, collar tie up. Aiming to give her fellow amazon more than she could handle right out of the gate!
_________________
Caboose's Friends List