You Want a Battle? (Here's a War) - Bullet For My Valentine:

Strategy: Methodical and logical, her time as a mechanic translates very well into her wrestling style. Ria chooses a part of the body, wears the limb down for her effective submission techniques. Everything is a process to her and while it may differ in the method she chooses, the execution is pretty much the same to ensure victory. Once identifying an opponent’s key strengths (i.e. strikers use of kicks and punches or acrobats with their need of endurance and energy conservation), she makes use of hit and runs tactics and counters to make them more manageable and susceptible to her submissions. If the opponent is more her size then expect high impact power moves at the start to wear down her opponent and gain control early on. With opponents larger and stronger than she is, Ria takes a more careful approach and makes use of momentum to take down her opponent. While it may take a bit more time, Ria would enjoy the process all the same.

Preferred Matches: Standard and Submission (unsurprising, I know), though she would not back down from a challenge if it was thrown at her!

Endurance: 4/5 – Despite being quite athletic, she knows her own limits well enough, able to pace herself and conserve her energy
Strength: 3/5 – In very good physical condition for simple power moves, the only limitation is her size. Not going to be lifting heavy opponents anytime soon…
Speed: 3/5 - She’s no Olympic sprinter but can move at ease, slick movements that have been tuned and refined from her time in the ring.
Defence: 3/5 – With more traditional and simple wrestling moves and holds, Ria knows how to attenuate and reduce damage well enough. More unique and creative moves and strikes are more than likely to harm her.
Technique: 4/5 - She’s a fast learner, sharpening and whet her skills for the ring.

Favoured moves: Many, many, many, many submission holds! Oh and takedown throws, dropkicks, sling blades, suplexes and you get the goddam drift.

Finishing moves:
TO BE CONFIRMED 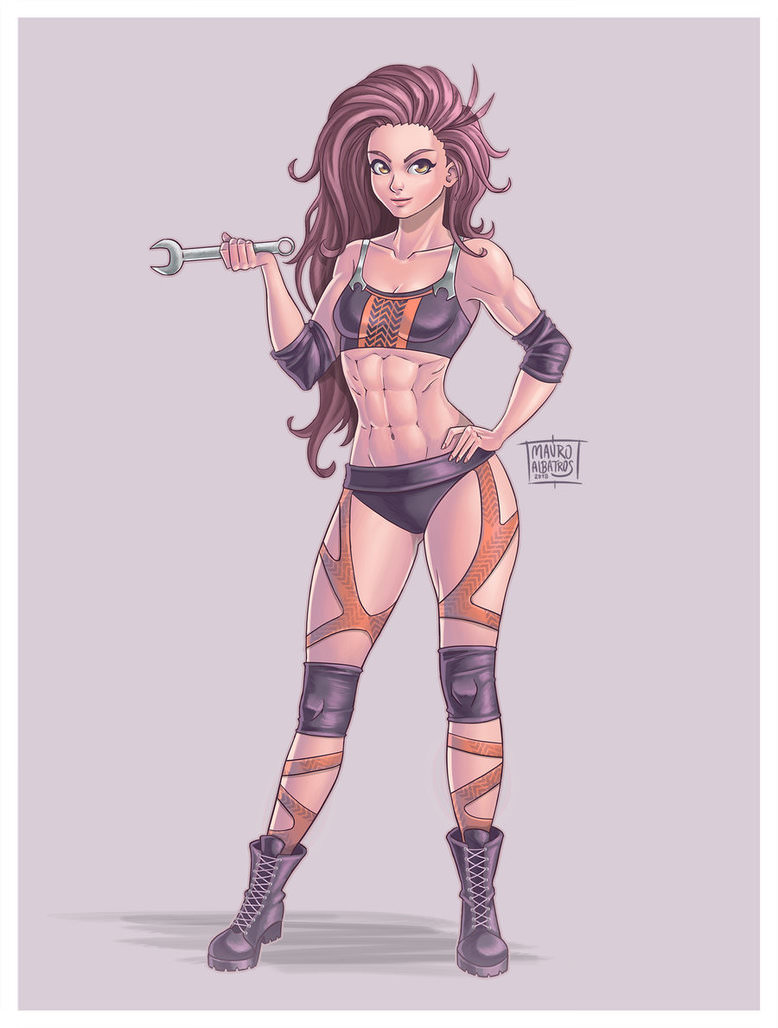 Personality: Easily recognized as a confident and charismatic type from the time she learnt how to install an engine, always able to produce a smile and can trigger a conversation, wherever she’s at a gym, or at the garage or even in the ring. Perhaps becoming more addicted to the fanfare than she might realise, although she doesn’t crave being the centre of attention, simply felt comfortable with it all. Ria shows that she is the best of both worlds, friendly towards her allies and competitive towards her rivals. She will treat people with the same respect as she expects to be given though she knows well that it is never given freely, it has to be earned.

Past/History: Most parents are lucky to be able to bear a child. There are so many that tried but failed to do so. So the ones that do are to be grateful. Then there are some parents that wished they had either a son or a daughter but ended up getting something different.

Ria’s father was one of them.

Needless to say, growing up was difficult for the young Ria, who grew up with a loving mother but the total opposite with her father. He wanted a son that he could be proud of that would carry on the lineage of respectful engineers. So imagine his surprise when the doctors said the baby was a girl. The mother joked that he pulled his hair out in anger but due to the father being bald as she grew up, it was perhaps more of a coincidence.

Even though Ria loved her mother, she wanted to get close to her father but each time, the father never reciprocated that love to her. They say certain things run in the family and she took the love of machinery. Whatever she could find, pipes, wires, nuts and bolts, her creativity grew and invented some things to play with. Her father never took notice and never pushed her or encouraged her to get into engineering. So if Ria wasn’t going to get it from her father then she’ll get it somewhere else.

Always finding herself in her uncle’s mechanic shop where her creativity was nurtured and gotten a good father figure. Soon, she worked there part-time, money was never the thing to drive her, it was to get her hands dirty, figuratively and literally, also to gain more experience. Using her father’s books and going into museums, it gave her some purpose in life to what she wanted to be aspiring to get to a top university and be just like her family line of engineers.

The father, however, was not putting up with that. The sudden cutting off her funds was perhaps the straw that broke the camel’s back and she eventually snapped at her father, causing a full-blown argument that was the catalyst to leave her home and run away. She didn’t care how far, she wanted to get away from that place.
However, the abruptness of her actions left her with no plan whatsoever. She had no money for academic studies and the only real experience she ever had is working as a mechanic. And with her qualifications, getting into a top school was next to impossible without the funds. So things were tough.

Not sure what to do, Ria (who by then changed her last name to her mother’s name) managed to get a job fixing automobiles and just being a general handyman. Feared that she lost the zeal, the passion for it all, she fell into despair. That is until she came across a customer that would change her life. Ria was able to chat to pretty much anyone, though that customer came quite frequently for service, always pleased with her work. One of the conversations is that the customer was a wrestler, to which she was surprised. Keep in mind, before she came into it, she was dismissive at best. But after the customer inviting her to one of her live shows, she found herself watching them in amazement, the women putting on such a show and having fun too. Soon, Ria paid more attention to what was going on backstage and she decided that it would be fun for her if she joined too. Also, the pay looked good, which put her aspirations of getting into a top university right back into her orbit. Being a fast learner, getting the basics of wrestling was no hard task for her and joined the ranks of that league, which she spent two years honing her craft and finding a style that fit her perfectly.

One of her wrestling buddies soon told her about AFW and while she was enamoured by the top tier wrestling in the display, there would have to be a pretty good reason for her to leave her home and move to Japan. It is when she saw an online banner for one of the top engineering universities there, Ria having accumulated enough money to pay most of her tuition. Getting the rest wouldn’t be such a problem with how much they are paying! With newfound passion and her dream close to coming true, Ria Kennedy moved to join the ranks as well as starting her studies in university. She can handle it…

Friends: In need of friends!
Allies: Them too!
Rivals: Not Yet. But will certainly find one in the ring!
Enemies: Hopefully she doesn’t make enemies
Crushes: She isn’t actively looking. But who knows….

You may RP and make threads as you wish.

Welcome to AFW! We hope you enjoy your stay here.

Please feel free to ask if you have any questions or concerns I or any of the other mods can assist with.
_________________
Check out the recently revamped Roster Page, now with pics!