Strategy:  Hunter tries to adapt to his opponents,  tailoring his offense to take advantage of any weakness he sees.

Hunter’s Arrow:  modified figure 4 headscissors that sees Hunter grab their near leg to twist his opponent into a bow as he puts them to sleep. 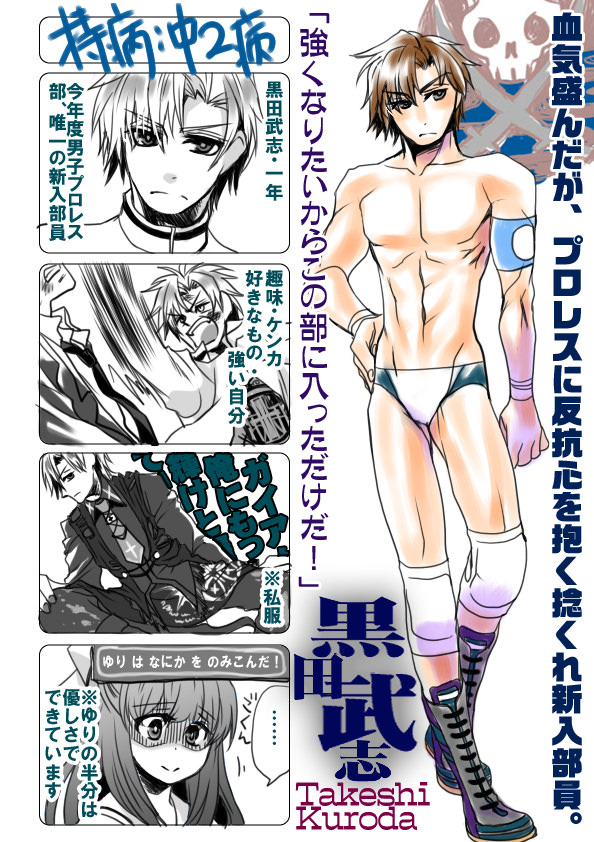 Personality:  Personable outside the ring,  Hunter serves as a mentor for several of the talented young wrestlers in his promotion.  He's been known to connect them with trainers,  help them navigate promotions,  and even personally train and instruct people he thinks have potential.  Inside the ring is a different story: Hunter assumes a cocky, focused persona once he steps between the ropes.  He will often attempt to get inside his opponents head with taunts and trash-talk. Genuinely enjoys wrestling, but can become highly competitive when he’s pressed.  He will default to impact wrestling moves if he becomes irritated with his opponent.

James Hunter was shocked to learn that his girlfriend of 6 months had a secret...Nikki was part of an underground sex wrestling league and wrestled under the name of The Wildcat.  Needing a partner to take on a rival,  Nikki decided to bring Hunter into the small training facilities and test him out to see if he had what it took.  Hunter loved it.  Training hard to avoid embarrassing his girlfriend,  Hunter attracted the attention of one of the league's main eventers,  Dana.  Taking the young man under her wing, she helped Hunter hone his skills in small gyms and private venues before taking his place with Nikki in the ring.  They soundly defeated Nikki's rival, and went on to become one of the most popular draws in their small promotion.

After Dana left the small league to move to a national venue,  she suggested that the recruiters keep their eyes on the team of Hunter and Wildcat.  Given a tryout,  the young heel team dominated their competition and were quickly signed.  Capturing gold in the promotion,  Nikki and Hunter were a wildly successful until jealousy and simmering competitiveness broke them up after they lost their titles to a team that included Hunter’s mentor, Dana.

Hunter and Nikki went on to have a bitter feud,  that was temporarily left incomplete when Nikki suddenly left the promotion just before their rubber match in a series.  After their feud, Hunter became a face…embracing his genuine enjoyment of the competition and teaming with another young wrestler named Amy.

Capturing gold with his new partner,  Hunter enjoyed a run at the top and slipped into a rut before the unexpected return of his ex.  After losing a few devastating matches to the returning Nikki,  Hunter upped his game,  training and refocusing himself into recapturing the intense competitor he had been before.  Slipping into the role of a tweener as he is regaining his reputation as a driven and focused wrestler since his ex’s return to his regular promotion, Hunter was prompted to wrestle as a visitor to the Tension Roster by his mentor Dana.  He’s getting to know the AFW, looking for some good competition and the chance to hone his skills in a new arena.

Fun Facts:
Despite his deliberately cocky and driven persona inside the ring,  Hunter is actually quite friendly if a bit sarcastic away from the squared circle.

Dreams of owning his own gym and being a trainer when he retires from active competition.

I suggest adding more to his personality. What's he like out of the ring, for example, how does he interact with people?

You may do matches and RP as you like.