Octagon Match
Rules: Standard rules.
- Contestants that leave the octagon will be immediately disqualified.
Victory Conditions: Obtained by either KO, submission, or pinfall.

A few whiffs echoed out through the hallways. Masuyo threw a few quick jabs into the air, shuffling her feet on the spot as she switched up seamlessly into a pair of forearm and elbow strikes, shadowboxing in the faint light behind the curtain. Her hands were taped up, her muscles were loose, and her smile couldn’t have been any wider. She’d only fought in Tension at one other time early in her career, and she’d left with some good memories. While the “Prince of Wrestling” could run his mouth, it was a good bout, leaving her up against the wall a few times from the gap in experience. It was tough, exhilarating, and plenty of fun...though the kiss was a bit weird in retrospect...but a good kind of a weird.

However, this was a new year, and that meant some parts of her contract were up for eligibility again, especially one part in particular: the Tension clause. She was entitled to at least one match in the arena per year, and management was just as quick to use it on her as they were the last time. She made a strong impression last time, and the crowd sounded excited to see her again, but Daisuke Takeuchi was just the acid test. A straight run to see how the Demon of Shibuya would stack up against a man in the ring. The Powers That Be wanted something a bit more...exciting this time around.

Masuyo shot a knee into the air, getting above waist height this time as she dwelled on the facts in her head. Her opponent was a newcomer, a foreigner if the name was anything to go by, and with only one other match under his belt that was so recent they hadn’t even posted the results yet. The kicker, though, was that he had an MMA background. Two mixed martial artists in the same ring - or, octagon this time around, since tonight's coordinators were apparently on the same wavelength. It wasn’t exactly going to be MMA rules, but if “Quintyn” - that was a real name, right? - was anything like she expected him to be, that wouldn’t matter much. Tonight, it was either tap out or pass out.

And if the kick Masuyo sent above her head was any indication, she had one goal for tonight. She couldn’t even attempt to hide the pleasant tune in her voice, the excitement lingering in each breath and every shout as she struck. A nostalgic feeling was overcoming her, pumping fresh energy into her veins. It was funny to look back on now, but she’d been away from an octagon for so long now. Her body was itching for it, reinvigorated by the sight just beyond the black veil in front of her. She brought her leg down and lowered her fists to her sides, letting a slow breath as her blood flow came to a slow...then picked up again the instant the stagehand poked her head out and waved her over, jogging excitedly to the curtain. 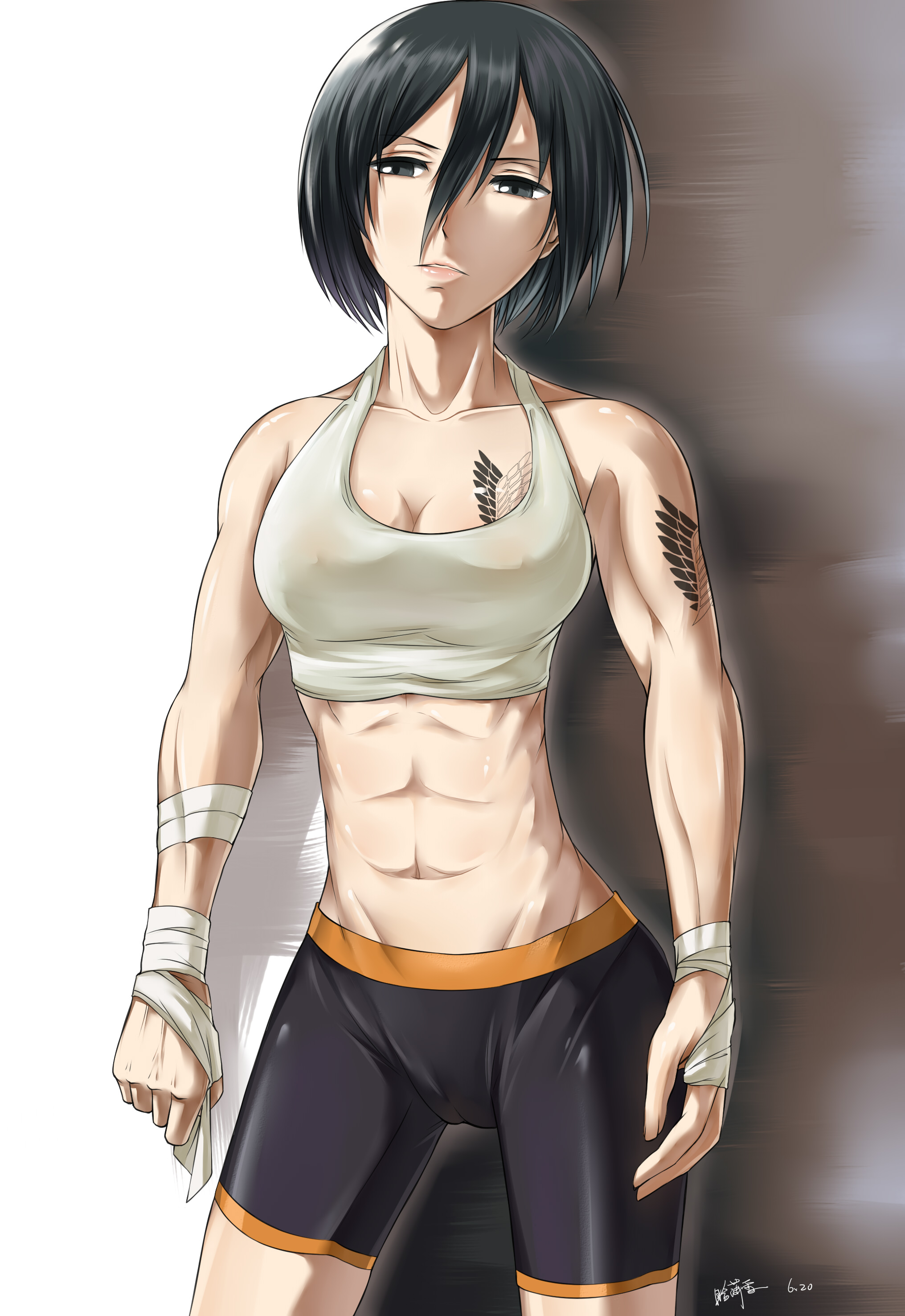 Through the darkness came a flash of red and white lights. The pleasant sound of the koto and the funky beats accompanying it echoed to and fro as Masuyo ran out from the top the ramp. She held her hands high, welcoming in the strong applause that came her way as she reached the ring floor. As expected, the octagon was waiting for her. She stopped in front of it and placed a hand on her hip, taking in the sight for a moment, impressed by its size and sturdiness. There were even AFW and Tension logos plastered along the corners and rails. They were treating this every bit as professional as a proper MMA league.

“Awesome…” She smirked and muttered to herself, rounding the corner and climbing the steps through the open door into the cage. She punched her bare knuckles together as she walked past the referee to her side of the ring, turning back around and facing the ramp as she dropped into a squat, extending one leg out, then the other as she watched and waited. Her blood was hot, her eyes shone like steel. She had a good feeling about this.

Well this was something.

The young man stood in the waiting room, warming himself up as he awaits for the call. He hadn't been here long enough. In fact, he only had one match that has yet to be televised. However Quintyn -and yes, that is  a real name - seemedve found some favor from the higher ups. It could be luck, since not many were lucky to catch the eyes of management but his debut match seemed to have impressed them. So much that he was put into another match. And oh boy was it a doozy.

To put it specifically, he was placed in the octagon. And that alone caught his attention that he agreed to it! They probably had looked at his background and decided to bring the octagon into it this time. This wasnt his first foray into the cage, having done a few local bouts back at home. But to do it in such a big stage like AFW was something to be excited for. The icing on the cake, he was actually going up against someone also with an MMA background.

Safe to say, he was really loving AFW right now.

Though the difference is that this one isn't excatly a Tension star, but rather, Masuyo - nice name by the way - a Friction wrestler. Apparently Friction women do at times come to tension due to a clause that they have and face off here. That was interesting enough for Quin, apparently management is on the same wavelength in making this match something they'd both thrive in. At the very least, he could only hope this one match in Tension wouldn't disappoint. As the stagehand soon have him the greenlight, it was showtime. 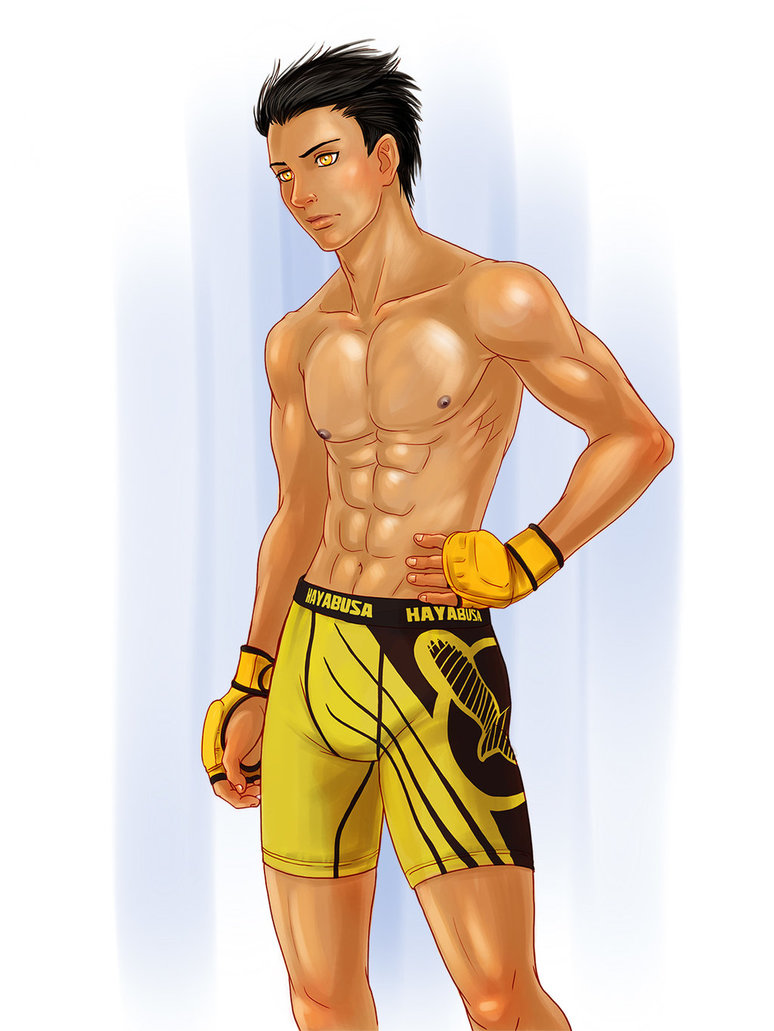 A change of tune started blasting on the speakers as the classic electronic music started to play, yellow and black lights started to shine in contrast. The tune played and accompanied Quintyn as he bursts through the curtains and jogs out to the ramp, bouncing on the balls of his feet. From there, he saw the octagon. And they have really gone the whole nine yards with it. Logos, the size of it all, yep, that's definitely an octagon. With his opponent standing inside. Perfect.Across hand movement before he'd pump his first in the air, jogging towards the cage, clad in his usual gear of yellow and black No guards this time, the only thing missing as he comes out, going for black tape this time around. This is the real deal. And he'd been around the block many times before.

Climbing the steel steps, his blood was pumping as he was the next to enter, rolling his shoulders as he greeted the ref and waved to the audience. From there, Quintyn saw Masuyo. Like, really saw her. A smile was on his face that nobody was gonna knock off... figuratively speaking.

"They really went all out on this." He said as he came closer. "But that's good enough for me. Nice to meet you by the way!" The Puerto Rican extended his hand out to the Demon. His last opponent was less than courteous but he thought he'd reach out to this one. It wasn't like he was going to strike out twice. Right?

And down came contestant number two.

Masuyo wasn’t exactly sure what to expect from whoever came through the curtains. It didn’t strike her until a second ago that there may have been a reason for the cage. Despite the set-up, this wasn’t the UFC. There were no weight classes, barely any restrictions on who could fight who. She may have just walked into the lion’s den and not even realized it.

She’d find out soon enough. While the MMA maven kept on her with stretches, the next theme came blaring in, and it’s owner not far behind. She stole a look from the ground as she shifted to her other leg, pumping the hamstrings a bit as her fears vanished into thin air. What did came to greet her didn’t look anything out of the ordinary. Athletic, eager, even had the usual attire like her, though he rocked that color scheme pretty well.

It was only until he stepped into the cage and got under the lights that she could actually see him properly. He had a nice frame, well-built and around her size, so they weren’t throwing her for a loop by mixing up the weight classes or anything. That was the first thing that struck her. The second was how young he looked. That probably wasn’t something to notice considering the average wrestler on the roster, but for a mixed martial artist? He had to be at least her age. Even more surprising for a foreigner. Spanish or Latin American if she had to guess. The more she saw, the more she was starting to connect the dots. The octagon, their backgrounds, their builds, their ages. But what about his style?

This was going to be an interesting fight. She was reeling her legs back in, working her way into a crouch when he came over to greet her. Her smile brightened a bit, easily reading the excitement in his voice.

“I know, right?! All this sponsorship really makes me feel special!” She brought her legs back together and popped up to her feet. When she brought her head up, though, she blinked for a second at the extended hand just a few inches from her. “Oh yeah.” She stood up fully and gave him a couple firm shakes. Been a while since she'd did that. “Greetings from Friction, new guy. Masuyo Ai. Glad we get to do this somewhere a bit more familiar for a change!” For a moment, she stole a glance off to the side after their hands separated, putting a hand at her hip. “Though, I’d figured I’d have graduated above the rookie level. No offense, but I’m kind of unbeatable. You’ll see in a sec.” She grew a cheeky grin as she chuckled to herself, looking Quin back in the eye and punching her fist against his chest. Solid. “I hope you can give me your best tonight.”
_________________