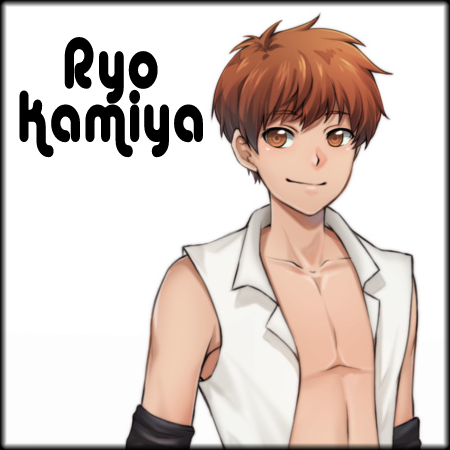 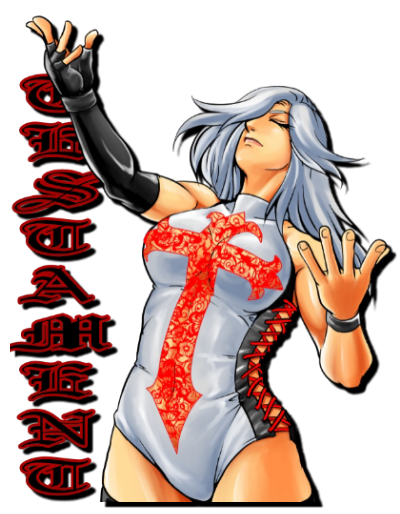 ***
The crowd was a sea of murmurs and whispers as they waited for the next match, for a few different reasons. One of those reasons had to do with the woman participating in this match - the wrestler known only as Testament. She’d debuted in the company a little under a year ago, to little fanfare, and had came out of nowhere to toss around one of the league’s veterans, Kyo Akamatsu, in a fight that many still remembered. Since then, she’d vanished. The rumors were that she’d been suspended, or that she’d been fired, or that this was all just a big publicity stunt gone wrong.

All that anybody really knew for sure was that she suddenly had a match tonight, that she was ungodly strong, and that she seemed to have an insane, nigh-homicidal hatred towards men, the likes of which had never been seen before in Tension. That last fact was what made the choice for her opponent tonight such an odd one.

Ryo Kamiya. Someone had either a terrible sense of humor or a unique taste for blood.

The woman making her way to the ring now didn’t fit the former category, though. She descended the ramp with long, powerful strides, with heavy metal blaring out behind her, thundering across the arena. The crowd had already formed a strong opinion of her, booing and hissing her way, jeering every step she made.

Testament didn’t seem to pay it any mind. Instead, she just walked up the steps, made her way through the ropes, and stood at the center of the ring, facing the curtain. Still. Silent. Waiting.
_________________

It was official, Ryo had pissed SOMEBODY off in management. Must have. Honestly, it was bound to have happened sooner or later. Flirted with the wrong guy or gal, or slept with the wrong higher ups daughter or niece or nephew. Honestly, it was pretty much bound to happen at some point, he couldn't deny that. Whatever it was he had done, his chickens had come home to roost, and whatever levity he previously had dropped to the pit of his stomach when he saw who he was facing on the match card backstage.

He had seen her last match alright, against the cute Kyo. That...did not end well for Kyo, and given nobody had seen Testament since, Ryo had hoped that was the last of her in Tension. Clearly, he was mistaken. This was gonna suuuuuuuuck.

Despite his feelings of trepidation however, he pulled his speedo up backstage, checking himself out in the mirror, before gulping and making his way to the ring, the funky horns of his theme music playing as he stepped onto the stage, barefoot and only covered in his slim speedo. In truth, his wrestling gear would have been more practical, but he was making a statement here. Maybe not the best statement, but a statement none the less.

Slowly, cautiously, he made his way down the ramp and slid under the ropes to enter the ring, remaining near the ropes, ready to leap between them if the woman lunged at him. "...Hey there. You uh...ready for a good match?"
_________________
Check out the recently revamped Roster Page, now with pics!

Testament was not a happy woman.

Granted, by all accounts, she was rarely, if ever a happy woman, and hadn’t been one in a long time. She seemed to have a constant surly attitude in the backstage, didn’t say much to anyone, had a habit of coming and going unannounced and unseen, and when she did speak, her words were terse and frank. Most of the backstage crew had taken up the habit of giving her a nice, wide berth, even though she’d never hurt any of them. So far as they were aware…

She didn’t answer him when he spoke - unless snarling and sneering and bristling counted as an ‘answer’. Along with that, she flexed her fingers, spaced her feet apart and settled into a wrestling pose. Eyes forward. Locked on him. Waiting.

When the bell rang, Testament began to move forward, heading towards him with strong, heavy steps. She didn’t lunge, but instead moved like a mighty glacier. Growing closer. Waiting for him to make his move. Waiting to pounce.
_________________

Oook...not the answer he was hoping for. Not by a long shot.

This...this could really only end badly, couldn't it?

Shaking such negative thoughts out of his head, the speedo-clad warrior bounced on his feet, shaking his limbs and making sure he was limbered up as the bell rang, getting his arms up defensively. Good thing too, as Testament started moving towards him, not quickly, but without an ounce of hesitation or confusion in her body language.

He couldn't grapple with this woman. No way. She had too much of a size and weight advantage over him for that. Striking wasn't exactly his main forte, and if he was going to pull this off, he needed to start strong. "Alright big and scary...I don't know whose joke it was to arrange this match, but I'm not going down easy!" Speaking with bravado, Ryo backed up near the ropes, giving himself as much distance to work with as he could...before the barefoot teen charged in towards Testament, jumping upwards as he reached her and kicking his bare feet out, aiming a dropkick right for the giants chest!
_________________
Check out the recently revamped Roster Page, now with pics!

Testament had only known Ryo for all of a minute, if that long, and he was already ringing many unwelcome bells. She could see it as she came surging forward, as he deftly maneuvered away from her, with that cocky little smile and those bright eyes and the unearned confidence in his voice. Everything she’d come to hate from men in her initial run.

Oh, and he was wearing a speedo. Just to rub it in.

The man - no, the boy was light on his feet, though, able to get around the ring quick, and he used that speed to bring the fight right to her. She had just started to storm his way when he narrowed the distance far faster than she’d anticipated, leaping up and shooting his bare feet in her chest, turning his body into a living missile.

It worked. Sort of. The attack wasn’t without effect, managing to knock Testament back one, then two, then three feet before she slammed her foot down and killed the momentum. And now she had an opening.

Rushing forward, she attempted to catch Ryo before he could fully rise, swinging her leg out to hit him with a knee in the chest and throwing her full weight behind the move.
_________________

Alright, dropkick successful, that was a decent start, now all he had to do was keep up the pressure, try and dance around the giant woman, tire her ou-KNEE.

The speedo clad Ryo had only been halfway up to his bare feet, when Testaments knee smashed into the young mans chest, knocking the lighter fighter onto his back, legs kicking high into the air as he actually slid on the mat from the sheer force of the blow, before his legs fell back to the mat, the boy groaning and clutching at his bare chest. "H-Holy shit that hurt..."
_________________
Check out the recently revamped Roster Page, now with pics!

If Ryo had any aspirations of dancing around her and playing keep away, Testament was all too happy to dissuade him of them, as her knee put him down exactly where he belonged. Still, it was a little - just a little - worrying that he could still from sentences, down there. He was tougher than he looked. Not that she considered it a real problem, but something to make note of.

Stepping forward, she reached down, grabbed him by the hair, and hauled him to his feet in one hard pull,, ignoring the referee’s protests all the while. With her other hand on his chest, she gave him a solid push and hurled him into the nearest corner, up against the turnbuckle - an area she expected him to get quite familiar with in the next few minutes.
_________________

The throbbing in his chest was followed by pain filling his scalp as Testament dragged him up to his bare feet, the speedo clad warrior valiantly trying to punch at her arm and hand, in a vain attempt to try and escape, only to be thrown back first against the turnbuckle, his lighter body bouncing off of it from the force of Testaments throw, dropping onto his knees after impact.

Groaning, but not out of the fight just yet, he ignored the burning in his scalp and charged at Testament while getting to his feet, ducking his head and trying to ram it into her stomach!

The more Testament thought about this, the more incensed she was becoming. Tension did have formidable male wrestlers, even if they were pigs. She could crush them all, she was sure of it, but they would do a better job than Ryo, the skinny excuse for a wrestler they trotted out. This was the wrestler they thought was worth her time. This was an expression of what they thought of her, and the female roster in general.

It did not do wonders for her mood.

She came storming his way, intent on following up, only to find herself taken aback when he made a sudden charge forward, showing far more life than she would’ve anticipated. He came in low and fast, turning his body into a human missile, and rammed her hard in the gut. It wasn’t the strongest blow, but the sheer surprise was enough to knock her back a step and leave her gasping for a moment.

One thing people always could agree on when it came to discussing Ryo, outside of his perverted nature, was that he was bold.

...Stupid perhaps, but bold none the less.

His sudden lunge did the trick, oh so briefly stopping the mighty Testament in her tracks, the speedo clad boy backing up into the turnbuckle behind him and stepping up the ropes, until he was standing on the middle turnbuckle, taking a chance and leaping off, trying to collide his body with the giant woman's and take her down with a flying cross body!