» Aoko Reinhardt vs Aphrodite: Start of Something New?
by SimplyMoon Today at 12:47 am

» Unfinished Business: Kogeki, The Demon Yokozuna vs. Aphrodite, The Love of the World
by SimplyMoon Yesterday at 11:39 pm

Strategy: With her MMA training, adjusted for pro wrestling, Alina tries to use smaller strikes and wear down holds, focusing on her opponents limbs, trapping them in various scissors and wearing them down over time with repeated holds and strikes, while using her good looks, flirtatious nature, and trash talk to distract them, all to set her up for her finishing heavy strikes or chokeholds to put them away.

Finishers:
Unfollowed- Alina scoops the opponent onto her shoulders, throws them forward and, while in mid-air, she drops back, swinging her long leg up to kick them in the head before they land!

Signing Off- Alina grabs a standing opponent, twisting one leg around the other girls, then rolls forward, pushing the opponent back and using her roll to force her opponent on her front, while Alina sits next to them. Leg still intertwined, Alina grabs the caught leg and pulls back on it, bending it in half against her own crossed leg, putting immense pressure and stretching on the other girls calf until she taps.

Backstage however, she reveals herself as more self reserved and soft spoken, often sitting by herself, buried in a good book or listening to a podcast. Intelligent and of good nature, she'll mostly keep to herself, lounging or training, though anyone that does manage to befriend her will find her a fun, if laid back, friend, more interested in a friendly game of chess than partying.

*Born in russia, the daughter of a rising MMA fighter and his american model wife, Alina quickly became used too, and fell in love with, the bright lights and loud crowds of a fighting arena, and the various personalities that filled such places, eagerly watching each fight and interview with glee and play fighting with her friends.

*When she was still a young teenager, her father, riding high on ego, accepted a rare and unique fight with a female american MMA fighter, boasting and bragging how he would defeat the young american quickly and without mercy, with many taking bets on his victory.

*To his surprise, the woman he underestimated dominated the fight, hitting him hard and fast and, before even the halfway mark of the first round, had him tapping out to a kneebar. The loss completely ruined his career, killing his credibility entirely. His fans left him, his wife left him, the league fired him, and thanks to losing money on betting on him, some shady Russian organization claimed he owed them a debt. Disgraced and looking to start a new life, he moved him and Alina to a small town in Alaska, where a cousin of his who lived there got him a job on an oil rig.

*Due to her father often being away from home for several weeks at a time on the oil rigs, Alina spent a lot of time alone at home as, turning to watching pro wrestling and MMA matches to occupy her time, as well as starting an Instagram account where she posted pictures of herself cosplaying as her favorite wrestlers.

*In her mid-teens, she met a girl in class named Chloe Almeida, another wrestling and MMA fan, who told her of a local sports bar that featured boxing/wrestling/and MMA fights late at night. Lying about her age, her and Chloe were able to get jobs as Ring Girls, wearing bikinis in front of the crowd and holding up signs with the round number around the ring, getting a front seat view of the action.

*Over time, as she got older, her father gave her special self defense and basic MMA training, and, after Chloe did similar, the two girls managed to get permission from the bar to do special attraction matches against each other, with Alina posting pictures of her fight gear (bought from her earnings) and fights put on her instagram.

*She started gaining more and more views, getting more popular on the site, and started getting sponsors, she caught the eye of a company that made MMA gear, who offered her a sponsorship, promising to get her more fights, and a chance to see the world, in exchange for wearing and promoting their gear. With her fathers approval, she accepted their offer.

*Alina would spend the next few years traveling, training, and fighting, learning wrestling in addition to her mma style, often fighting Chole as her opponent, gaining fans and sharing her matches and various pics on her instagram. When an AFW scout offered her a contract to join Friction and offered to bring her friend and rival Chloe with her as well, she accepted immediately.

Has a remote control drone fly above the ring during her matches and hold her cell phone, filming her matches and sending clips to her Instagram and her other social media sites, often taking time during the match to pose for her camera.

Loves books, and reads whenever she gets the chance. Loves the feel, the texture, even the smell of a fresh book, and has spent many a night cuddling up in bed with a good book, preferring fictional fantasy books and biographies over all else.

Has good eyesight in the ring, but wears reading glasses outside the ring.

Loves playing chess, her second favorite game. Chloe tries to play with her, but constantly loses.

A big fan of fantasy/rpg board games, due to finding hours of enjoyment with them with either her father or friends in the lonely small town she grew up in in Alaska, where there wasn't much else to do in the snowy wastelands. While her father taught her chess, which  she loves and they still occasionally play, she also has a deep fondness for playing the DND and Fallout Board games, and, aside from her wrestling images, some of her instagram content is her cosplaying as characters she's made. Being friends with Rydia Highwind has given her more time to indulge in such activities.

Rydia Highwind   -  Meeting Rydia when they were in highschool in Alaska, the two quickly became friends, their shared love of wrestling and RPG games helping them form a bond together. Over time, they got jobs as ring girls at a sports bar with a fight club, and after training together, became fighters themselves, having several fights against each other, but maintaining their friendship. Once AFW came calling, she was certain to bring her friend and rival with her! 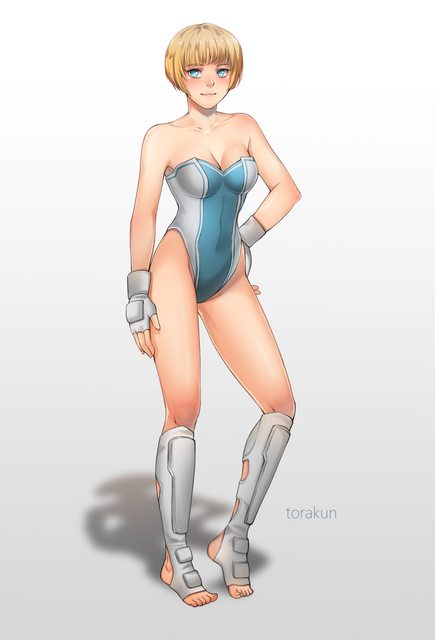