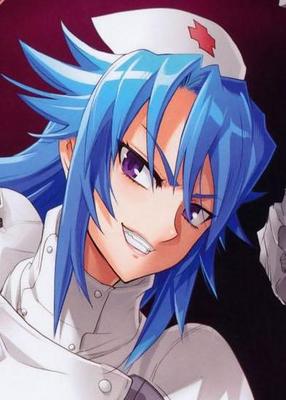 Strategy: For Kira, true victory is when your opponent can’t get back up to stand against you. Her only strategy is putting her opponent on the ground and breaking them apart piece by piece. Broken bones, blood, all of it is on the operation table, and she will not hesitate to use whatever she can in order to grow her infamy.
Style: Violent Striker/ Kick Boxer

Attire:
Note: Gauntlets are made of a reflective plastic that gives the impression of metal. Strikes from the gauntlets are non-lethal. 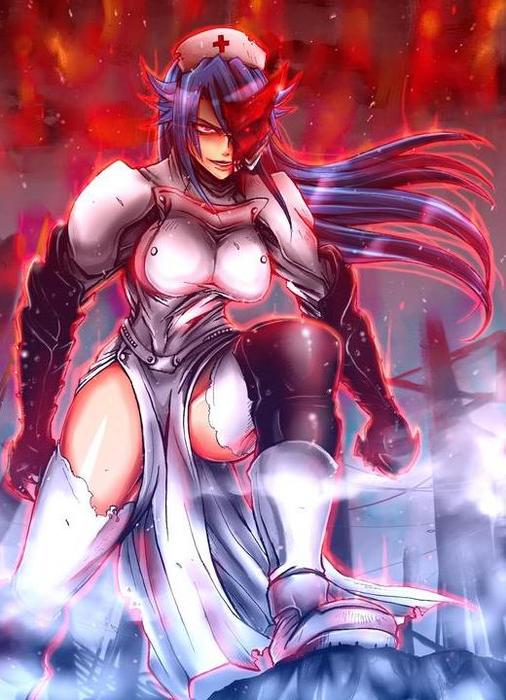 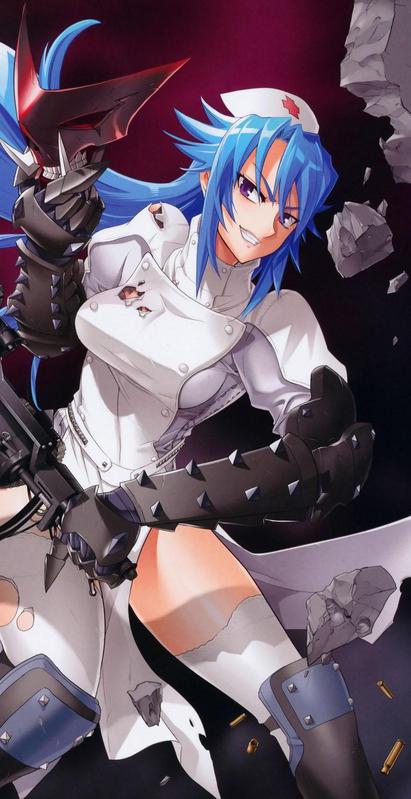 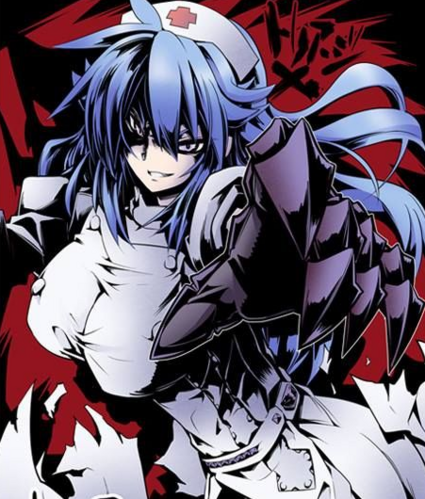 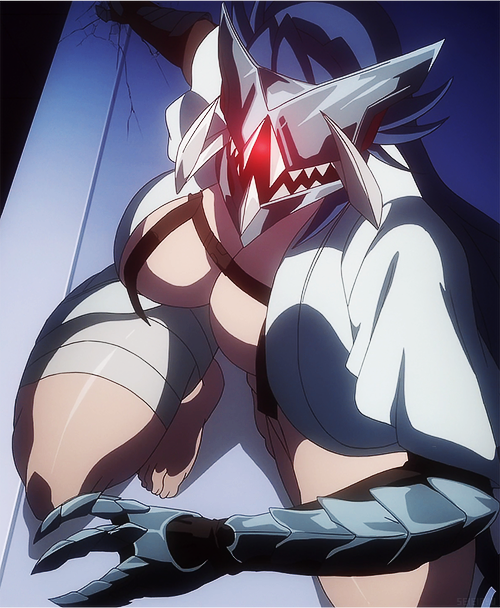 Spoiler:
Can take a decent beating, but struggles with precise and planned strikes. If she takes too many heavy slams, Kira will quickly fall into fatigue.

Spoiler:
Deceptively powerful, Kira’s strength is not something to scoff at. While she will struggle with foe’s that are taller than her, she has little issue overpowering girls smaller then her.

Spoiler:
Kira is fast only in the sense of strikes. Her punches and kicks can some in with the speed of a bullet…but Kira herself is rather slow in her movements. She struggles with retreating opponents because of this.

Spoiler:
Kira is more than willing to take a few strikes if she thinks it will rattle her opponent. She will avoid grabbles like the plague, due to her weakness in that area.

Spoiler:
Strikes are Kira’s specialty, and it shows. Preferring to resort to a straight brawl, she can be weak to counters and struggles with anything that isn’t a choke or a slam.

Kira favors striking her opponents over grapple moves. What few she employs in her tactics, she does so irregularly. It is difficult to say what specific “moves” she seems to prefer, though they often seem to be modified to insure maximum discomfort for her foe. A favorite modification she makes is adjusting her grip so her foe suffocates in some manner.

IV Drip- A violent chokeslam straight to the ground. The move gets its name due to the length of time Kira holds her opponent in the air, choking the life out of her opponent for a solid minute before smashing their head into the floor.

ICU- A standard MMA mount, followed by a barrage of heavy strikes to the opponent’s defense. The ideal situation would be either knocking the opponent out after cracking apart their endurance and defense, or having them submit before something too drastic happens.

Appearance:
Kira tends to stand out in any crowd. Not only is she taller than most, but she also has the appearance of a model. Her good looks only help accentuate her athletic frame, often wearing clothes that accentuate her long legs or showing off her sapphire hair. She has a beauty mark on her left cheek, but often tried to conceal it, thinking it breaks the symmetry of her face.

When out in her personal life, she tends to wear more professional pieces of clothing. She tends to favor white, as it brings out the most color in her features while giving her a calming presence to others. Many say she looks like an angel, unaware of how she truly is.

Calculating, dismissive, and self-centered, Kira is far from a kind person and nowhere near a good person. Whether its at “work” or on her own time, the bluenette is always looking for the next best opportunity to screw someone over and gather up whatever precious reward she could get out o their misfortune. While Kira can be authoritative and take risks others wouldn’t she can be rather cowardly should those risks come back to bite her. If she has subordinates or allies, she won’t hesitate throwing them into the proverbial fire to insure her own safety. A strong-willed woman with a penchant for deceit, only the cruelest of fiends can find it in their black hearts to work with her.

Kira was always rather fond of animals. Even as a child, she loved creatures of all shapes and sizes. Whether it was the common household pets such as dogs, cats, fish, or the more exotic animals such as reptiles, amphibians, or sea creatures. She seemed to love each and every kind of animal, finding something that was unique about them and falling for it completely. However, despite her love for creatures, she never owned a pet. Her family’s situation was not one of prosperity. Hard times came fairly often, and though Kira always had food in her belly or a warm place to sleep…there were times when there was no gas to heat the home, or electricity was shut off.

As she grew older, she began spending more and more of her free time volunteering at animal shelters. Hour after hour, she would help feed, groom, and clean up after the animals, becoming rather attached to a few key animals. One such animal was a rather older fellow. A surprisingly kind animal, it had been passed around from shelter to shelter its entire life, and yet it always seemed to get excited whenever Kira came by to visit it. The quick flick of the tail, the ways its movements seemed to get more energetic, all of it served to create a special connection. To Kira, this was her animal…it just so happened to live in a shelter.

However, Kira would learn that the shelter she volunteered at was a Traditional type of shelter. One day, her animal was not in its cage. In fact, quite a few had disappeared that night without so much as a warning. She would be horrified to learn that they had been put to sleep. Many of them were apparently too old, and space at the shelter was limited. They had explained it all to Kira, but she heard none of it. All Kira knew was that this shelter had just killed quite a few animals…her animals.

The next day, she came in depressed. Her work was slower than usual, less personal and more methodical. Many who worked there figured she was still in shock. But in reality, Kira was just waiting for her chance. When no one was looking, she swiped the keys to the kennel, opened up as many cages as she could and let the animals run wild. She was hoping many would escape, and some did, but many more simply got lost in the shelter and were quickly recaptured. Upon discovering who was at fault and why, Kira was no longer welcomed into the shelter.

Kira’s sadness seethed into anger. What right had they to welcome in animal into their place and then put it down? It seemed cruel, inhumane even. But as she grew up, she learned that all sorts of animals were exploited by mankind. Alligators skin was used to make bags, Rhinos would have their horns removed, canines put into dog fights, and tigers were hunted for sport. As she learned more and more about the cruelty all the creatures she loved had to suffer, she began to hatch the idea of mankind deserving the same treatment.

Things quickly descended from there. She began to assault people in alleyways behind restaurants. Her plan was twofold, punish those that would eat the animals she held dear, while also destroying the trust in the business. She moved around frequently, and had soon earned the nickname of “The Back-Alley Beater” from her local newspaper. No one ever had a solid description, as she changed her disguise every time she went out. Her erratic schedule made her crimes nearly impossible to predict. Sometimes, the Beater struck during the day, sometimes at night. Usually it was only one attack a week, but sometimes there would be more.

However, one day she would slip up. She would attack a couple in front of a shady restaurant, but it would turn out to be a pair of undercover officers. She was quickly disarmed, and only just barely escaped with her identity hidden. While the officers were in hot pursuit, Kira found herself snatched up by a passing van, quickly knocked unconscious.

When she came to, she was given a choice by a strange voice. Work for them, and get closer towards her goal of making those that harmed her precious creatures pay for their true crimes…or be sent back onto the streets, where the police were closing in on her, and would doubtlessly catch her with enough time. There was little Kira could do, and despite her distrust, she reluctantly accepted.

Years would pass, her mysterious employer sending her odd jobs to do, and occasionally giving her information that would her towards her goal. The Back-Alley Beater made much more sporadic appearances…but her victims became much influential. One such victim was the son of a CEO that ran a large fish food restaurant chain that had branches all over the world. Her long pauses in activity kept the police from getting too close, and her identity always remained a mystery.

Soon, her employer would push her right out into the public eye. It seemed one of their top employees had been tasked with infiltrating a sports federation to inject a new revenue stream inside…but the results were too slow. They wanted the project to move along faster. She would be sent to ensure the employee was working diligently on her project, and in exchange, they would give her more information towards Kira’s ultimate goal.

So, one quick sign up sheet, a health physical, and audition later, Kira would find herself newly employed. The place? The Federation of AFW. She would have to find her contact soon, and help speed up her progress anyway she knew how.

Chiropractor-Enjoys the sound of joints cracking. Fingers, necks, knees, back. Anything that makes a nice popping sound, the louder the better.

Playground Bully- A chronic teaser, Kira won’t let any opportunity to put someone down slip by if she can help it.

Visual Irony- Kira does not believe that Veterinarians truly care for the animals that come into their office. In a twisted way, she thinks they hurt more then they help, and by extension Nurse’s hurt more people then they help. A few have pointed out the lapse in logic, but she doesn’t care.

Many Masks- Kira wears a variety of masks. Sometimes literal, and sometimes figuratively.

Left Behind- When things turn sour, Kira has a knack for disappearing when no one is looking. She is something close to an escape artist, escaping most restraints in order to make a quick getaway.

Sociopath- Kira has some sociopathic tendencies, caring very little for her fellow man in anyway shape or form. She is however, extremely fond of animals.
_________________
Tarantulust's Lair